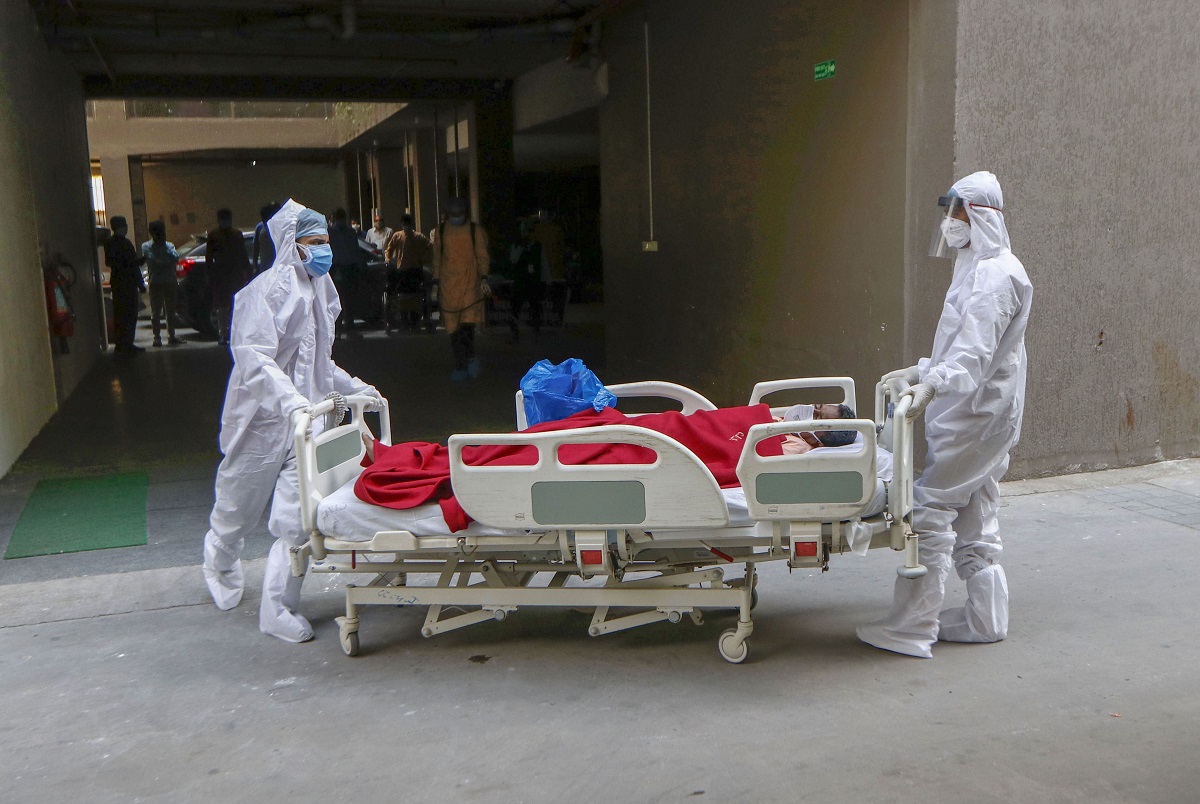 Healthcare workers shift a COVID-19 patient to another ward of the CIMS hospital in Ahmedabad, October 1, 2020. Photo: PTI

New Delhi: The Indian Medical Association (IMA) said on Friday over 500 doctors in the country have died due to COVID-19, once again criticising the Centre for “washing its hands” of responsibility by admitting that it does not maintain a database of health workers who have succumbed to the viral infection.

According to Hindustan Times, the IMA provided an updated list of 515 doctors who it said died after contracting COVID-19 while treating patients. The body added that the actual number could be “much higher”.

“Our latest figures say 515 doctors treating COVID-19 patients have been martyred in the country so far. And these are all allopathic doctors that we have identified through our various branches of IMA – there are 1,746 branches functional across the country. The number could actually be much higher,” Dr Rajan Sharma, president of IMA, to HT.

On September 16, the IMA slammed the Centre for admitting in parliament that the Union health ministry does not maintain data about the number of healthcare staff who died from COVID-19. “This also exposes the hypocrisy of calling them corona warriors on one hand and denying them and their families the status and benefits of martyrdom,” it said.

Also Read: India’s Healthcare Workers Are at the Frontline – and the Back of Our Minds

Minister of state for health Ashwini Kumar Choubey said the ministry does have a database of those seeking relief under the Pradhan Mantri Garib Kalyan Insurance Package. This database showed that just 64 doctors had claimed the insurance package.

In response, the IMA released a list of 382 doctors who it said had died after contracting COVID-19 while treating patients. That list has now been updated by the body.

Later, on September 22, Union health secretary Rajesh Bhushan said that 242 claims under the scheme had either been processed or were under process. This number is likely to have included nurses, ASHA workers and other healthcare workers, not doctors alone.

“We are closely monitoring the data under PM’s pandemic response package. There is an insurance cover amounting to Rs 50 lakh for all frontline health care workers, and this has recently been extended till March 2021. Under this package, 62 claims have been settled, more than 130 claims are being processed… and above 50 claims that are yet to come from states,” Bhushan said, according to Hindustan Times.

In September, the IMA had termed the insurance package “unfriendly”, saying it was only a partial scheme. It said because many families did not receive the insurance cover, they face the ignominy of the government “disowning them altogether”.

On Friday, IMA president Sharma once again criticised the Centre. “How is it possible that they cannot maintain a database at the central level when you need an Aadhar Card to get tested for COVID-19 through reverse transcription-polymerase chain reaction (RT-PCR) test. How difficult can it get then?” he asked.