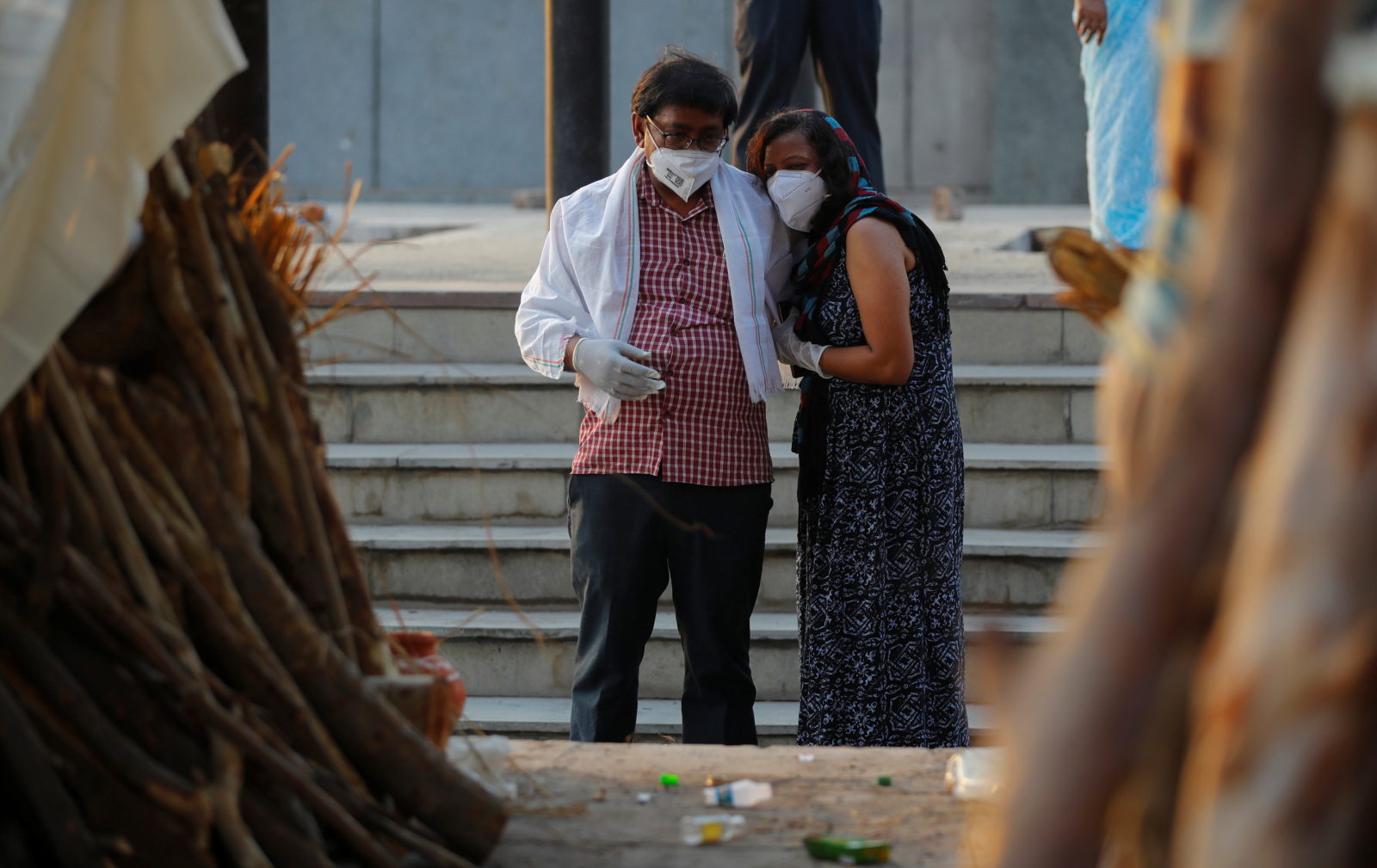 A couple mourns as they stand next to the funeral pyre of a relative who died due to COVID-19, New Delhi, May 10, 2021. Photo: Reuters/Adnan Abidi

Bengaluru: India‘s coronavirus crisis showed scant sign of easing on Tuesday, with a seven-day average of new cases at a record high and international heath authorities warning the country’s variant of the virus poses a global concern.

India‘s daily coronavirus cases rose by 329,942, while deaths from the disease rose by 3,876, according to the health ministry. India‘s total coronavirus infections are now at 22.99 million, while total fatalities rose to 249,992.

India leads the world in the daily average number of new deaths reported, accounting for one in every three deaths reported worldwide each day, according to a Reuters tally.

The World Health Organisation said the coronavirus variant first identified in the country last year was being classified as a ‘variant of global concern’, with some preliminary studies showing that it spreads more easily.

“We are classifying this as a variant of concern at a global level,” Maria Van Kerkhove, WHO technical lead on COVID-19, told a briefing in Geneva on Monday. “There is some available information to suggest increased transmissibility.”

Nations around the globe have sent oxygen cylinders and other medical gear to support India‘s crisis, but many hospitals around the nation are struggling with a shortage of the life-saving equipment.

Eleven people died late on Monday in a government hospital in Tirupati, a city in the southern state of Andhra Pradesh, due to a delay in the arrival of a tanker carrying oxygen, a government official said.

“There were issues with oxygen pressure due to low availability. It all happened within a span of five minutes,” said M Harinarayan, the district’s top bureaucrat said late on Monday, adding the S.V.R. Ruia hospital now had sufficient oxygen.

Sixteen faculty members and a number of retired teachers and employees who had been living on the campus of Aligarh Muslim University, one of India‘s most prestigious, had died of coronavirus, the university said.

Adding to the strain on medical facilities, the Indian government has told doctors to look out for signs of mucormycosis or “black fungus” in COVID-19 patients as hospitals report a rise in cases of the rare but potentially fatal infection.

The disease, which can lead to blackening or discolouration over the nose, blurred or double vision, chest pain, breathing difficulties and coughing blood, is strongly linked to diabetes. And diabetes can in turn be exacerbated by steroids such as dexamethasone, used to treat severe COVID-19.

Doctors in the country had to warn against the practice of using cow dung in the belief it will ward off COVID-19, saying there is no scientific evidence for its effectiveness and that it risks spreading other diseases.

In the state of Gujarat in western India, some believers have been going to cow shelters once a week to cover their bodies in cow dung and urine in the hope it will boost their immunity against, or help them recover from, the coronavirus.

“There is no concrete scientific evidence that cow dung or urine work to boost immunity against COVID-19, it is based entirely on belief,” said Dr J.A. Jayalal, national president at the Indian Medical Association.

India‘s second wave has increased calls for a nationwide lockdown and prompted a growing number of states to impose tougher restrictions, impacting businesses and the wider economy.

Production of the Apple iPhone 12 at a Foxconn factory in the southern state of Tamil Nadu has slumped by more than 50% because workers infected with COVID-19 have had to leave their posts, two sources told Reuters.