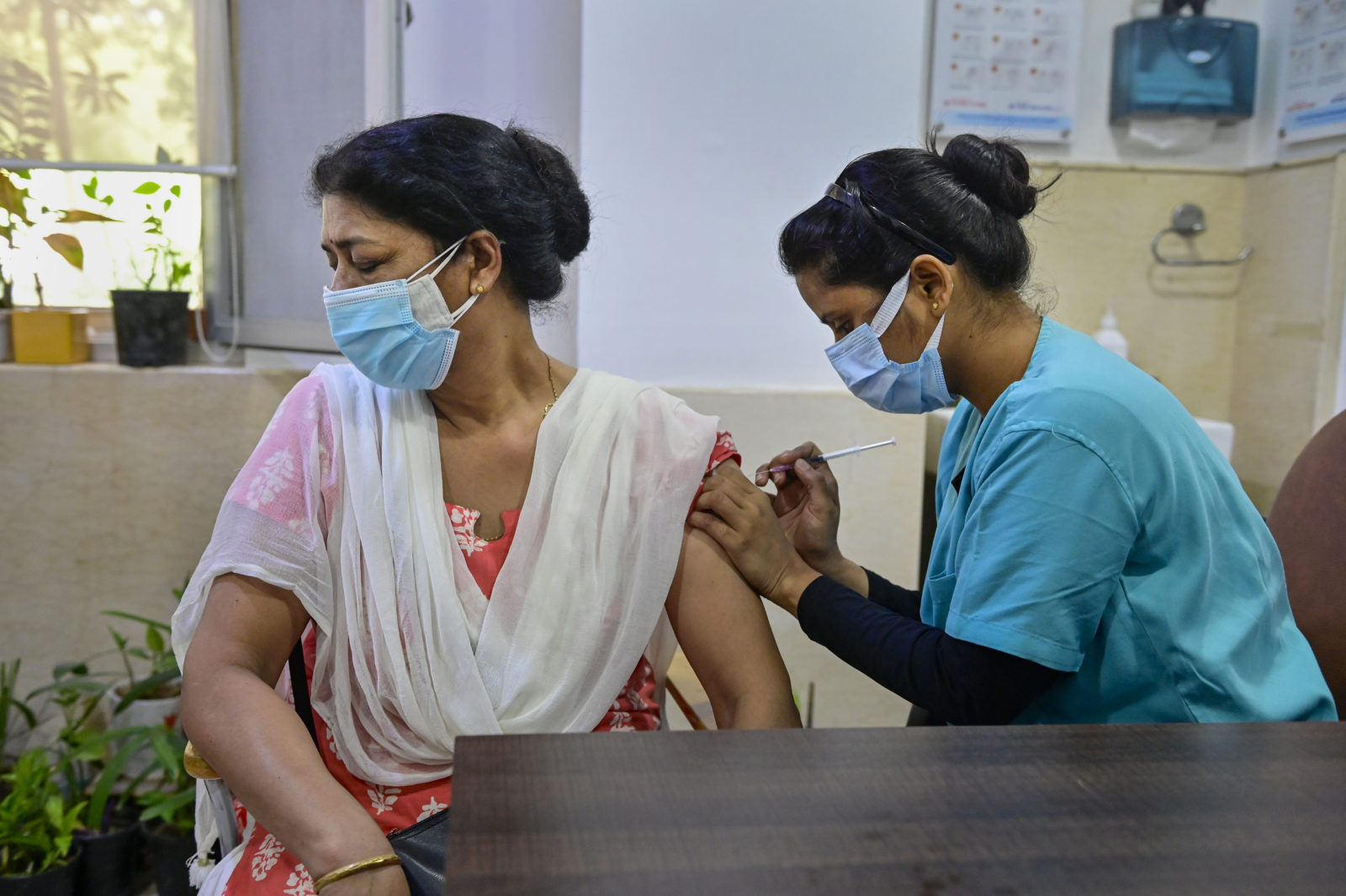 Gujarat, Goa Top New Energy Index – But It Could Be Flawed

A health worker inoculates a woman with a booster dose against COVID-19 at a private hospital in New Delhi, April 10, 2022. Photo: PTI/Ravi Choudhary

New Delhi: There is currently a small uptick in COVID-19 cases across some of India’s states. The secretary of the Union health ministry wrote letters to the chief secretaries of Maharashtra, Kerala, Mizoram, Delhi and Haryana asking them to be on alert and to maintain COVID-appropriate behaviour. Together, these events have stoked interest in a potential fourth wave in India.

The Wire Science spoke with Anurag Agrawal, dean of biosciences and health research at Ashoka University, Sonepat, and former head of the Institute of Genomics and Integrative Biology, New Delhi. The conversation included the chance of a fourth wave in India, reopening schools and theatres, mask mandates and the question of re-reinfections, among others.

The interview has been lightly edited for clarity. The questions are in bold. The editor’s modifications, for clarity, are in square brackets.

What can we make of the rise in cases? Do they signal a potential new wave?

Were we expecting an uptick in cases? Yes. Because all restrictions went away, schools are back to normal, movie theatres and all such places – where the risk of transmission is high – are [now] open. So you were, in any case, going to expect a bump in cases. The question is if the bump is going to become a mountain: only then could there be a fourth wave.

I think it’s too early to read too much into this. Even if parameters like positivity rate and reproductive numbers go up by small proportions, that shouldn’t panic us at this point in time. These parameters don’t function in isolation but with the case trajectory.

Beyond ensuring personal protection, there is nothing much to be done at this point in time.

At what point in time should we see the doubling rate to be a red flag?

It’s hard to say [exactly]. But if the cases double in one week and the doubling time is consistent and clean, then probably one may need to worry. But remember that by doubling, I don’t mean doubling of cases from 10 to 20 cases or 20 to 40. This [amount of] doubling happens easily. But when the bar of doubling is high and the doubling is happening in a week’s time – consistently – then it may be an indicator of exponentially increasing transmission.

Coupled with this, you have to see if vulnerable populations are getting infected. Are you seeing severe cases? And then you start looking at models to understand the future trajectory.

If at any time you are getting a steady increase, the reproductive ratio has to be greater than 1. In Delhi, for example, it’s beyond 1, but you have to look at doubling time along with that. If you do that, you don’t see a reason to panic in Delhi also.

We are seeing cases rising but not anything beyond expectations.

Most of the Indian states have done away with mask mandates. Your thoughts?

Mandates are for others’ protection. Encouragement is for one’s own.

At this point in time, I am not inclined to mask mandates. For your personal protection, if you are in a high-risk area, crowded settings or an indoor setting, it’s better to keep the mask on. Therefore, it’s a matter of personal judgement now. Pushing something as a ‘mandate’ that we know is not going to be followed isn’t useful.

Schools opened up but some reported a few cases and then shut down again. Should they have shut?

Everything is important, including schools. And one has to look at the risk-benefit ratio. Given that more than 70% of children have already got an infection [as a recent seroprevalence survey found], they have a certain degree of protection [against severe disease].

Now, children are not ready to stay at home: in other words, they will mingle. So if they can mingle elsewhere, why not in schools?

What would you say to those parents whose children have tested positive?

The risk in children [of severe disease] is very, very low. If children mingle, they will get an infection, but rarely severe disease. Don’t panic at one-off cases, and instead look at the consistent behaviour [of the virus] and evaluate the risks.

Does everybody in India who is older than 18 years need a booster dose?

We know two doses are not good enough. But two doses plus an infection [a.k.a. hybrid immunity] gives you decent protection.

Still, if one is 40+ years old in India, one should go for a third dose, because this group has a lot of comorbidities – and at times people are not aware of them. For those who are in the range of 18-40 years, and if they clearly know that they have comorbidities, they may take a third shot, based on their perception of the risks.

Many experts have pitched for a heterologous boosting regimen but the government has stayed with the homologous option.

Heterologous is always good – but look at India’s scenario. More than 80% of the population has taken Covishield for their primary doses. A heterologous vaccine would mean giving this large chunk of the population a Covaxin shot, and the Covaxin production [volume] is small. The government couldn’t have ignored this reality.

But the most important thing is we already have a protein-subunit vaccine. [This is Covovax, manufactured by Serum Institute in India.] It is one of the best candidates for booster doses. I honestly can’t understand the reason why that has yet not become a part of our immunisation programme. Based on all the available data, the protein-subunit vaccine is the best booster candidate.

How much do we need to be worried about the recombinant XE variant, in India?

The XE is a recombination of the BA.1 and the BA.2 sub-lineages [of the omicron variant]. It does not contain any novel mutations as such. India has already been through [outbreaks of] BA.1 and BA.2, more so of the latter. Logically, one does not see a reason for India to worry too much about it. Given time, the virus will evolve further, but currently I [personally] don’t see XE being capable of creating a massive new wave.

We need to be vigilant and that is sufficient.

So the fears of a fourth wave are ill-founded, right?

For me, a wave is a wave if it [strains] the healthcare infrastructure and leads to substantial morbidity and mortality. That I really don’t see [happening at the moment], and therefore the fears are ill-founded.

But the omicron variant caused a third wave without straining the healthcare infrastructure.

At that time also, I maintained that we would get a wave of infections but not a [strain] on our healthcare systems. Reasonable precautions [in the event of a surge] of infections is always a good idea. That’s it.

A recent article in The Guardian said reinfections are going to define the future of this pandemic. Your take on this vis-à-vis India?

Reinfections are easy to measure when the gap between [the number of] known infections and the total [number of] infections is small. In the UK, this gap is a small one. But in India that’s not the case, to begin with.

Secondly, seroprevalence surveys that came before the omicron variant said 80% of the population in India had already been infected [by the virus]. The omicron variant infected 30-40% more. So most of those [new] infections would have been reinfections.

What is the difference between reinfections by the same variant and those by different variants?

Reinfections by the same variant happen to the tune of 2-5% [of all infections]. In the case of different variants, the proportion is a bit higher, 20-30%.

But remember that, in India, almost everyone has been infected already. So if there are no reinfections, there can’t be another wave. What you need to worry about in India is not about reinfections but re-reinfections.

With almost everybody having been infected once and a large chunk vaccinated, a new wave can only happen [in India] if a variant is able to break all the barriers: protection granted by previous infection and by the vaccines.