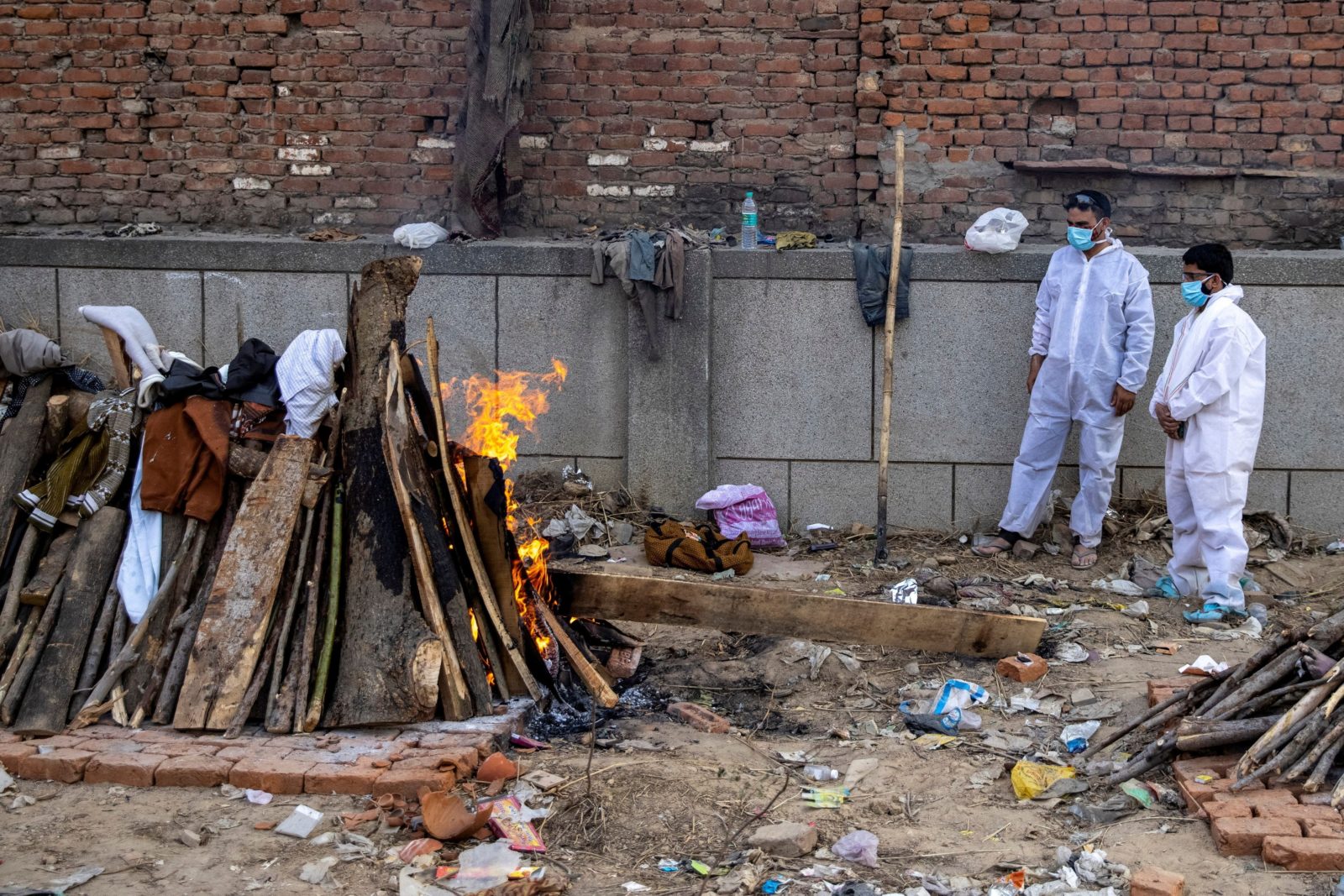 Relatives stand next to the burning funeral pyre of a person who died of COVID-19, at a crematorium in New Delhi, April 22, 2021. Photo: Reuters/Danish Siddiqui

* The Indian government is likely to have overestimated India’s capacity to manufacture COVID-19 vaccines, an analysis by pharmaceutical industry veteran Neeta Sanghi has found. According to Sanghi, estimates of global manufacturers’ capacity to produce vaccines were based on their capacity to manufacture flu shots and the manner in which these manufacturing facilities could be converted to produce COVID-19 shots. As a result, the Indian government appears to have overlooked the simple fact that India can contribute only around 20% of the world’s vaccines, not 60% as was previously believed. (The Wire Science)

* An empowered group of officers within the Union health ministry has estimated that India’s daily oxygen production capacity of 7,287 metric tonnes (MT) and stock of 50,000 MT imply that demand for medical oxygen for COVID-19 patients – 3,842 MT per day – hasn’t outstripped supply. However, other reports have found that the bulk of the daily oxygen production is earmarked for industrial use, including the nine industries the Centre has exempted from diverting their oxygen to hospitals. Second, between the date of assessment, April 12, and today, India’s load of active cases has shot up from 1.26 million to 2.15 million. So India’s existing oxygen production capacity for medical use won’t suffice – and could in fact run out in two weeks.

* In the early hours of April 23, the director of the famous Sir Ganga Ram Hospital in New Delhi reportedly said that medical oxygen at the hospital will last only for a few more hours, that 60 COVID-19 patients are in danger and – ominously – that healthcare workers were manually ventilating patients. The situation was similar in two hospitals run the Max group in the city, where, according to a tweet, over 700 patients have been admitted. The tweet added that the facilities had received an emergency supply of oxygen but that it would last only for two more hours.

* As India grapples with a COVID-19 outbreak in which each day seems more unprecedented than the last, China has offered a helping hand. The superpower’s foreign ministry shared a one-line statement with Hindustan Times: “China is willing to communicate (on) specific matters with India according to its needs”. The paper also reported that Chinese foreign ministry spokesperson Wang Wenbin “had said Beijing was aware that the epidemic in India had become severe and that there was a temporary shortage of necessary materials for epidemic prevention.”

* Earlier this week, the US government advised people against travelling to India even if they had been fully vaccinated while the UK placed India on a ‘red list’ of countries from/to which travel of non-residents would be temporarily restricted. These countries have now been joined by Canada, the UAE and Israel. Other countries that have restricted travel to/from India include Singapore, Hong Kong, New Zealand and Oman. (Firstpost)