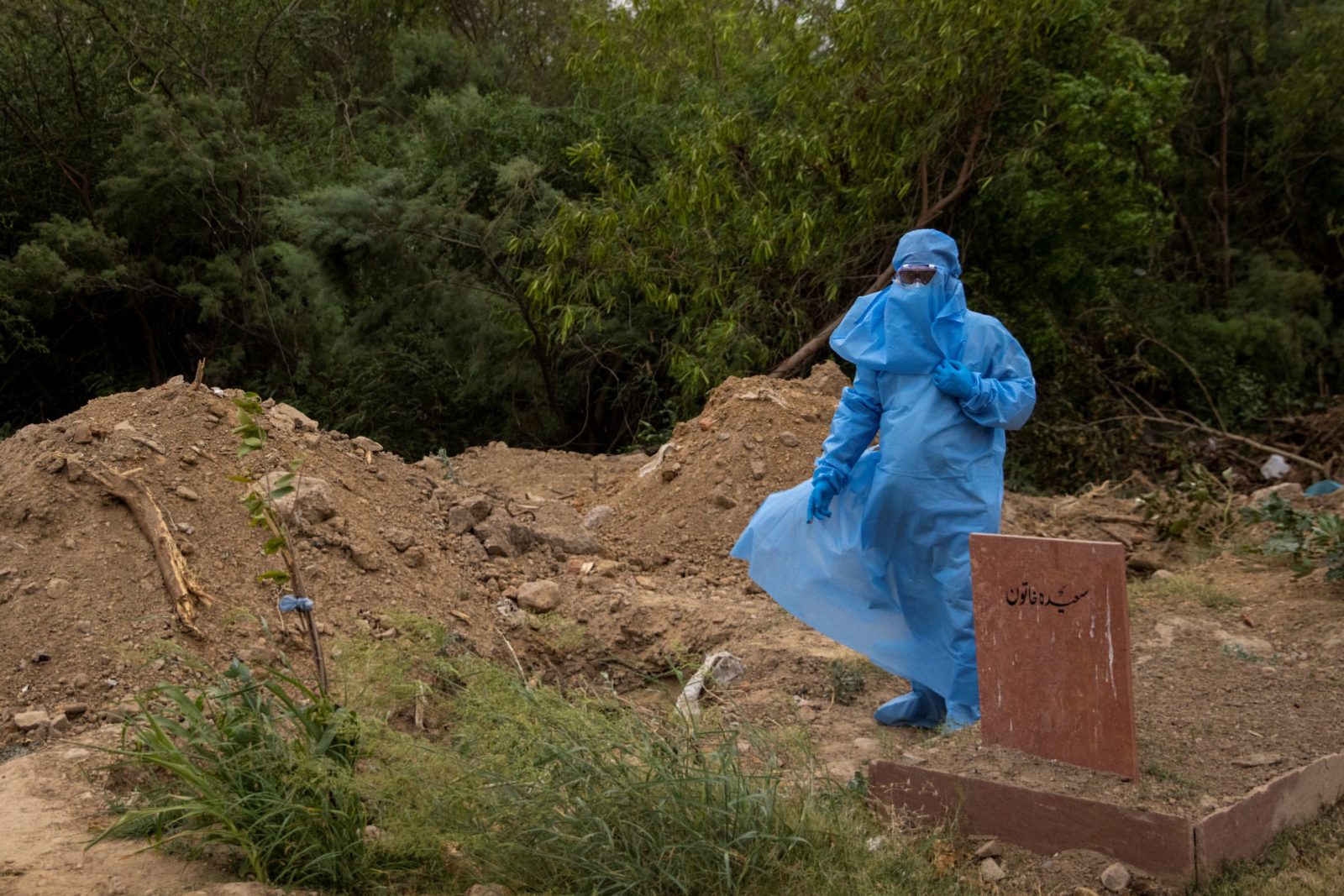 A relative of a man who died COVID-19 waits for the burial at a graveyard in New Delhi, April 16, 2021. Photo: Reuters/Danish Siddiqui

New Delhi: Even as the Indian government has, at every turn, dismissed researchers and research institutions that have said the country’s excess deaths during the COVID-19 pandemic far surpass the official record, it has come up against a challenger it may find is not so easy to ignore: the World Health Organisation.

Ahead of releasing data about the world’s ‘official’ number of excess deaths due to the COVID-19 pandemic, the WHO has set the cat among the pigeons of Indian government officials by recording that India’s toll was at least four-times higher than what government records show – and has also recorded the Indian government’s request that the WHO numbers be delayed by “10 years”, according to a news report.

Two members of a technical advisory group (TAG) that prepared the forthcoming report have confirmed to The Wire Science that its findings are at odds with the Indian government’s claims about the number of people who died due to COVID-19 in the country since early 2020 – and in line with independent researchers estimated.

This conclusion is likely to seriously challenge India’s insistence of the integrity of its data collection system. The WHO has effectively stamped its authority on all those studies that disputed the official figures, especially those whose estimates are closer to the WHO’s own. The WHO itself carries some heft by virtue of being an agency of the United Nations, of which India is one member state.

The Narendra Modi government has often restricted access to some of the relevant data, including withholding important numbers, and disputed expert advice and assessment at many turns to vex discussions on the subject. Nonetheless, many researchers have been able to piece together estimates of excess deaths using what is available in the public domain, as well as through surveys, hospital records, compensation claims, etc.

At the same time government officials have also consistently denied the findings of these studies, at times casting doubts on their robustness and at others simply standing by its own death surveillance system. According to these studies (see here, here and here for example), the excess ranges from 5.8x to 10x of the official death toll. India’s official COVID-19 toll is 0.52 million so far.

Both members of the TAG didn’t specify what the WHO’s own estimate of India’s COVID-19 death toll was. But Prabhat Jha, an epidemiologist at the University of Toronto, said he understands the “WHO’s estimates [to be] consistent with all other scientific studies.” He is also a member of the same TAG but said he was commenting independently.

However, according to an unnamed WHO technical advisory group member quoted by Amruta Byatnal for Devex on March 30, the WHO has estimated India’s excess death count to be at least 4x above its official number. This, the report added, has riled the government – so much so that it asked that the WHO hold off releasing its report for an astounding 10 years.

Also read: India Had Most ‘Excess’ Deaths During the Pandemic, Analysis Says

It is the WHO’s policy to share international data it has compiled with its member states – and this is how the Indian government came to learn of the WHO’s findings. However, it appears the WHO has decided to place its obligation to share this data over India’s request to delay its publication by a decade. The body confirmed to The Wire Science that it will release the numbers in early April.

“We are confident that, in cooperation with the TAG with whom we have been working, WHO has constructed a sound model that is producing robust estimates, that will be published shortly, noting India’s reservation,” it wrote.

Most recently, a prominent study published on March 11, 2022, estimated that India had the most excess deaths among the world’s countries, as a sum of recorded and unrecorded fatalities. In terms of recorded deaths alone, India has reported the third-highest number of deaths due to COVID-19, after the US and Brazil.

“Given the infection fatality rate of this virus and the level of infection which India experienced in 2020 and 2021, the death toll just doesn’t match with the two factors,” Bhramar Mukherjee, a professor of epidemiology at the University of Michigan’s School of Public Health, told The Wire Science. “It was very simple” even without these studies. “But now we have observed data on excess mortality.”

Mukherjee also serves on the WHO group for COVID-19 deaths; her comments here were however offered in her independent capacity.

Prabhat Jha, an epidemiologist at the University of Toronto, said many other countries  haven’t been honest about their excess death numbers. As the WHO’s forthcoming report itself is expected to acknowledge, the world has had 6 million more deaths since early 2020 than it has recorded. But he also said there was a key difference between their and India’s responses: other countries have tended to dispute the number of excess deaths whereas India has denied that such deaths exist at all. “India’s position is far more extreme,” according to Jha.

“The extent of infection, testing capacity, the capacity of the healthcare system prior to the pandemic, the burden of comorbidities like cardiovascular diseases and diabetes, and prevalence of smoking are some factors … that feed into modelling for COVID-19 deaths,” Mukherjee said. For India, according to her, it was a challenge to get proper figures even about these factors because of the poor quality and availability of data.

Both Jha and Mukherjee said the Indian government’s denial of expert findings on excess deaths could have better legs to stand on if it could produce a better study of its own. For Mukherjee, this means the government releasing Civil Registration System data for all states every month, instead of the 10-12 states for which this data is available on an annual basis. Jha, on the other hand, suggested revising upcoming Census forms.

“Add a simple question: ‘has there been any death in your household starting January 1, 2020?’ If yes, record age, sex and date,” he explained. “If that’s available, you have a direct counting of excess deaths. That’s the simplest way.”