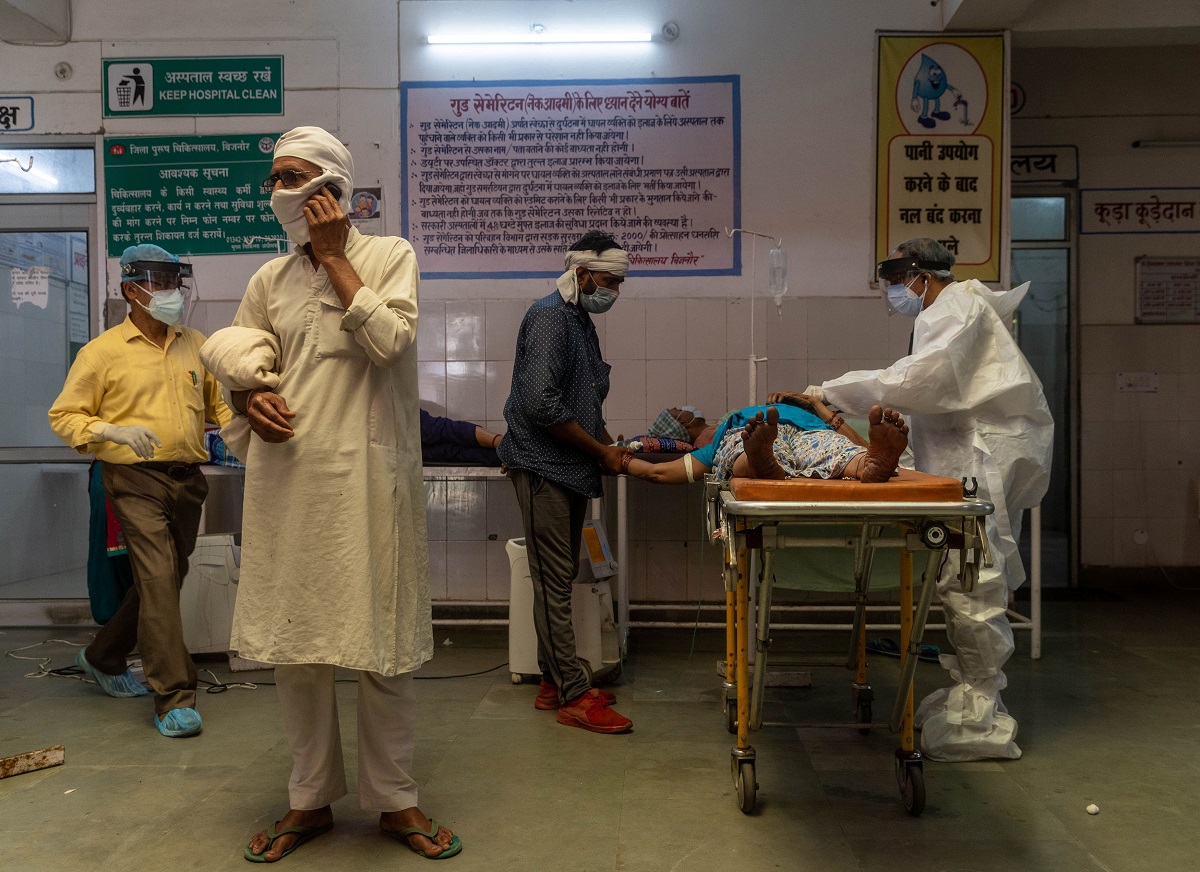 A man speaks on the phone as a doctor tries to revive his wife at a government-run hospital, Bijnor, Uttar Pradesh, May 11, 2021. Photo: Reuters/Danish Siddiqui

India’s tally of coronavirus infections climbed past 24 million on Friday, amid reports that the highly transmissible variant first detected in the South Asian nation was spreading across the globe.

The B.1.617 variant has been found in eight nations in the Americas, including Canada and the United States, said Jairo Mendez, an infectious diseases expert with the World Health Organisation (WHO).

“These variants have a greater capacity for transmission, but so far we have not found any collateral consequences,” Mendez said. “The only worry is that they spread faster.”

Among the infected were travellers in Panama and Argentina who had arrived from India or Europe, while in the Caribbean, the variant was found in Aruba, Dutch St Maarten and the French department of Guadeloupe.

It has spread to the Himalayan nation of Nepal and also been detected in Britain and tiny Singapore.

Public Health England said the total number of infections due to the variant had more than doubled in the past week, to 1,313 across Britain.

“We are anxious about it – it has been spreading,” Prime Minister Boris Johnson said, adding that meetings would be held to discuss measures. “We’re ruling nothing out.”

Singapore said it was limiting social gatherings to two people and putting a halt to dining in restaurants.

About half of the nearly 150 passengers booked to return on Australia’s first repatriation flight from India were denied boarding because of positive test results, an Australian government official said.

“The human catastrophe that is unfolding in India and Nepal should be a warning to other countries in the region to invest heavily in surge capacity for an emergency response,” said Yamini Mishra, of rights group Amnesty International.

“The virus is spreading and transcending borders at a frightening speed and will continue to hit the region’s most marginalised populations hardest of all,” the group’s Asia-Pacific director said in a statement.

While the tally of infections crossed 24 million, the death toll stood at 262,317, since the pandemic first struck India more than a year ago.

But a lack of testing in many places meant the official count omits many deaths and infections, prompting experts to estimate the real figures could be five to ten times higher.

The situation is particularly bad in rural areas of Uttar Pradesh, India’s most populous state, home to more than 240 million.

Television has broadcast images of families weeping over the dead in rural hospitals or camping in wards to tend the sick.

Bodies have washed up in the Ganges, the river that flows through the state, as crematoriums are overwhelmed and wood for funeral pyres is in short supply.

The second wave of infections, which erupted in February, has been accompanied by a slowdown in vaccinations, although Prime Minister Narendra Modi threw open inoculations for all adults from May 1.

Although India is the world’s largest vaccine producer, the huge demand has left it low on stocks. By Thursday, it had fully vaccinated just over 38.2 million people, or about 2.8% of a population of about 1.35 billion, government figures show.

More than 2 billion doses of vaccine are likely to be available between August to December this year, top government adviser V.K. Paul told reporters amid criticism that the government had mishandled the vaccine plan.

Those would include 750 million doses of AstraZeneca’s vaccine, as well as 550 million of Covaxin, made by domestic producer Bharat Biotech.

“We are going through a phase of finite supply,” Paul said. “The entire world is going through this. It takes time to come out of this phase.”