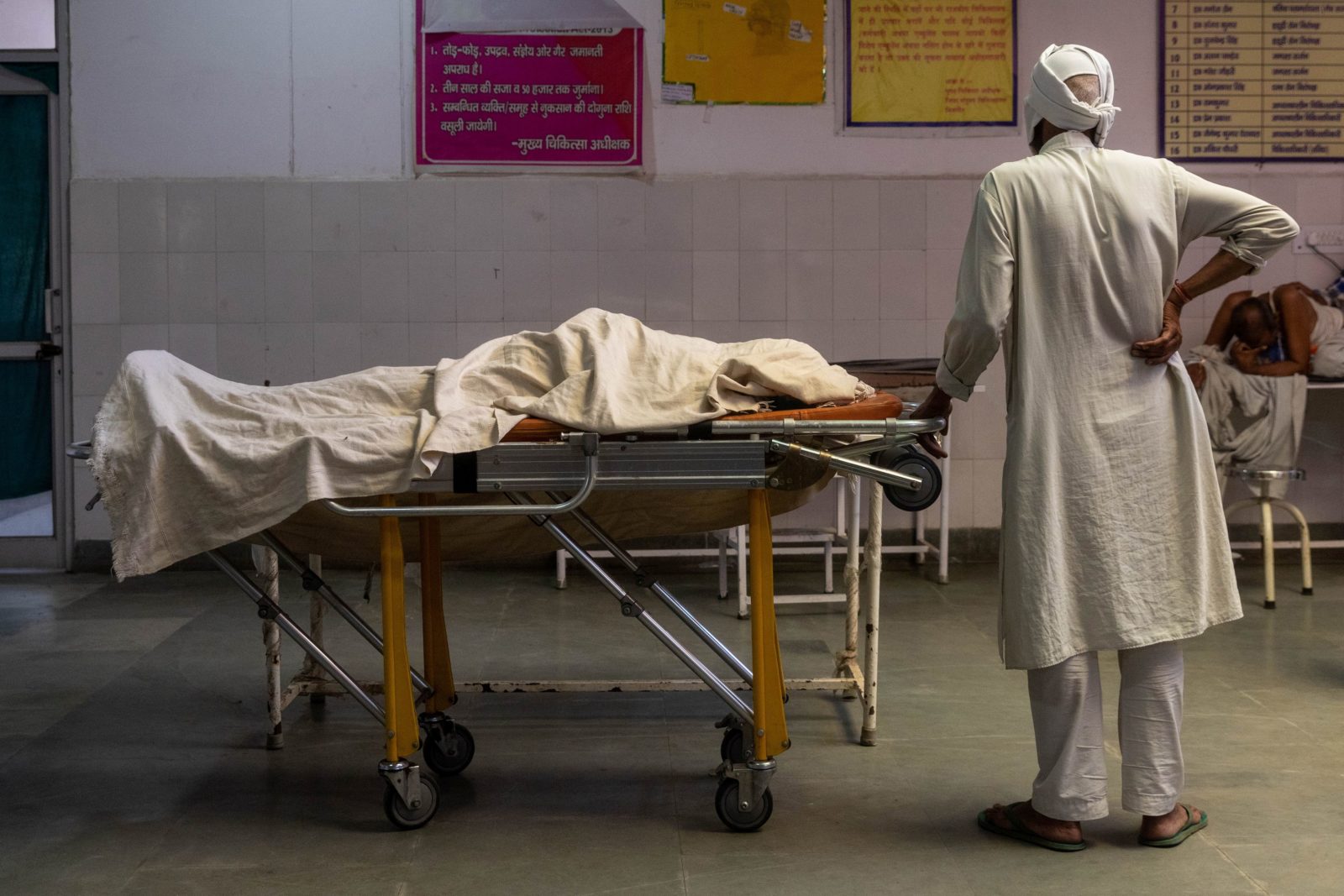 A man stands next to the body of his wife, who died due to breathing difficulties, inside a government hospital in Bijnor, Uttar Pradesh, May 11, 2021. Photo: Reuters/Danish Siddiqui

Bengaluru: India said on Wednesday a record number of people were killed by the coronavirus in the past 24 hours, pushing its overall death toll over a quarter million, while a leading virologist said it was too early to say if infections had reached a peak.

Deaths from COVID-19 swelled by 4,205, while daily coronavirus cases rose by 348,421, with India‘s overall number of cases surging past 23 million, according to health ministry data. Even then, experts believe the official numbers grossly underestimate the real scale of the epidemic’s impact, and actual deaths and infections could be five- to ten-times higher.

India‘s COVID-19 infection curve may be showing early signs of flattening, but the decline in the number of new infections is likely to be slow, said Shahid Jameel, an Indian virologist.

“It is still too early to say whether we have reached the peak,” he was quoted as saying by the Indian Express newspaper. “There is some indication of the cases plateauing. But we must not forget that this is a very high plateau. We seem to be plateauing around 400,000 cases a day.”

India, with a population of 1.4 billion people, currently accounts for one in three of the reported deaths from COVID-19 around the world, according to a Reuters tally, overwhelming hospital and medical staff, as well as mortuaries and crematoriums. Drugs and medical oxygen are in short supply.

The brutal second wave of COVID-19 infections has spread from the cities to small towns and the countryside, ripping through a fragile health system ill-equipped for a crisis of this scale.

Rural parts of India are also running short of wood for traditional Hindu cremations and scores of bodies are washing up on the banks of the Ganges river which flows through the most populous areas of the northern plains.

Akhand Pratap, a resident of Ghazipur district in sprawling Uttar Pradesh state, said that “people are immersing bodies in the holy Ganges river instead of cremation because of shortage of cremation wood”.

Also read: Bodies Float Down the Ganga as Nearly 4,000 More Die of COVID-19 in India

Even in New Delhi, many COVID-19 victims have been abandoned by their relatives after cremation, leaving volunteers to wash the ashes, pray over them and then take them to scatter into the river – rituals usually conducted by the family.

In a report published on May 12, the WHO said the B.1.617 variant first identified in India had been detected in at least 44 countries so far. The global health body has classified it as a “variant of concern” that requires heightened tracking and analysis.

Vaccines are also running short, especially in Maharashtra state around the financial centre of Mumbai, and in the capital, Delhi, two of India‘s hardest-hit regions.

India‘s second wave of the pandemic has increased calls for a nationwide lockdown and prompted more and more states to impose tougher restrictions that have hurt businesses and the wider economy.