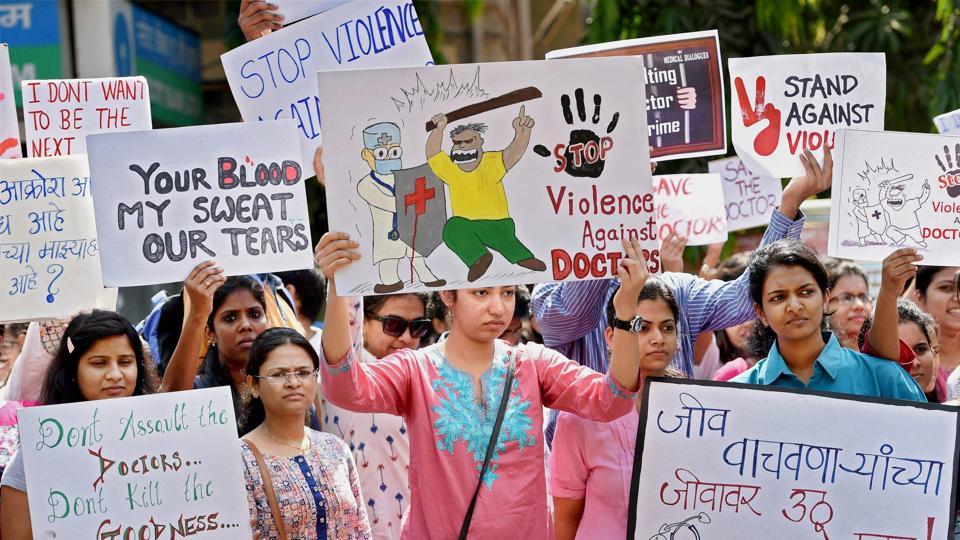 Mumbai: Doctors at JJ Hospital, the only state-run hospital in Mumbai, have declared an indefinite strike from May 22. The strike was announced following the violence that broke out on May 19 in one of the wards in the hospital after the death of a 45-year-old woman suffering from an acute gall bladder complication.

While the doctors had been on strike since the violence broke out on Saturday, the Maharashtra Association of Resident Doctors (MARD) decided to make it an “indefinite strike” after their talks with the state medical education minister Girish Mahajan failed on Monday, May 21.

The meeting between the doctors and Mahajan is reported to have failed since the latter did not agree to give any formal commitment over the doctors’ demands. Though the government has given in to the demand of additional guards, they have not agreed to provide a written assurance – which has been one of the primary demands of the doctors.

As the meeting failed, doctors from Sion Hospital, another prominent hospital in the city, also joined the protest and committed to go on a “mass bunk” until the demands were met. It is feared the strike might spread to other parts of the state as well. A member of the KEM unit of MARD said that resident doctors in all other hospitals will wear black ribbons while working as a mark of protest against the incident and if need be, also join the strike.

A number of patients have been turned down at the JJ Hospital in the past three days. Security at the entrance has been beefed up. While the MARD representatives said that the doctors will remain available in case of emergency and for other major surgeries, patients who require periodic check-ups and consultation are being turned back.

Supriya Pardeshi, a rheumatoid arthritis patient, had travelled over 25 km from suburban Mumbai with her husband for treatment at JJ Hospital. But after a wait at the hospital for a few hours, Pardeshi had to return without meeting the doctors. “It is challenge to travel so far because of my failing health. On top of that, the travel fare too is high. My husband sells fruits on the street. If he comes with me to the hospital for a day, that means he loses his one day’s income,” Pardeshi said.

What caused the violence

The doctors said they were helpless and had to take this drastic step after two of their colleagues were severely injured in the violence that followed the death of Zaida Sanaullah Sheikh, a patient at the hospital. Her bereaved family members had accused two doctors – one who was treating Sheikh and another on-duty doctor – of medical negligence and beaten them severely. The commotion was captured on the CCTV installed inside the hospital, and in no time the footage went viral.

Sheikh’s family was upset over her sudden death and accused Dr Atish Parikh of negligence. He was thrashed severely, due to which he suffered a facial fracture. Parikh is presently undergoing treatment at the hospital. Shalmali Dharmadhikari, the on-duty woman doctor, another nurse and a relative of another patient who tried to intervene, were also manhandled. It took few hours to calm Sheikh’s family members. By the evening of May 19, five persons from Sheikh’s family had been arrested for assault and grievous hurt by officers from the JJ police station. The doctors are still in the process of going through the CCTV footage to verify if more people were involved in the attack.

Doctors’ groups such as MARD and the Indian Medical Association (IMA) have time and again spoken about their security concerns. Each time the doctors have gone on a strike, they have sought intervention by the state authorities and demanded complete security and cooperation for when such violent incidents break out in hospitals.

An orthopaedic doctor at JJ Hospital told The Wire that the attacks are so sudden and violent that any amount of preparation and intervention does not help. “Most times, the families are aware the patient might not make it. But still, they get emotional and end up creating chaos in the hospital. While we partly understand the emotions of losing a family member, thrashing doctors and abusing them is not acceptable,” the doctor said.

An altercation between a patient’s family and doctors is not a new occurrence in hospitals – both in government and privately-owned ones. In fact, in Maharashtra alone, over 60 cases of assault on doctors and property destruction have been registered over the past two years. There has not been any conviction in these cases. The state had witnessed a series of attacks on doctors and hospital staff in March last year. There were widespread attacks and subsequent protests in hospitals of Dhule, Shirpur, Nashik, Aurangabad, western Maharashtra and Mumbai.

In March 2018, as many as five government hospitals had admitted having turned down several poor patients due to lack of funds as the funds from their public ledger accounts were used for paying the fees of the private security officials instead of its original purpose of providing health services to the poor.

In March 2017, following the long-drawn strike in hospitals across the state, the Bombay high court had ordered the government to increase the number of security guards at hospitals. The doctors had demanded a security personnel outside each ward in every hospital across the state. An emergency alarm system, which was proposed following the court’s order, still remains only on paper. Following the court’s order, the Directorate of Medical Education and Research (DMER) had also issued a circular stating that 800 more personnel were being recruited from the Maharashtra State Security Corporation (MSSC) for 13 hospitals.

The state’s finance department, however, failed to sanction salaries of these 800 new security personnel and the DMER in the absence of funds had to dip into the personal ledger accounts. At JJ Hospital alone, over Rs 20 lakh a month is paid to its MSSC guards. In January, a decision was taken to stop the payment to the guards as the funds in the personal ledger account was depleting. Since then, the number of guards at the hospital has decreased drastically.

The direct impact of the state and doctors’ failed negotiation, however, is being suffered by the patients, especially the poor ones who can only afford to go to public hospitals. As long as the state continues to drag its feet on the promises made to the doctors and doctors continue to forget their primary responsibilities, it is the poor of the state who would be left in the lurch.