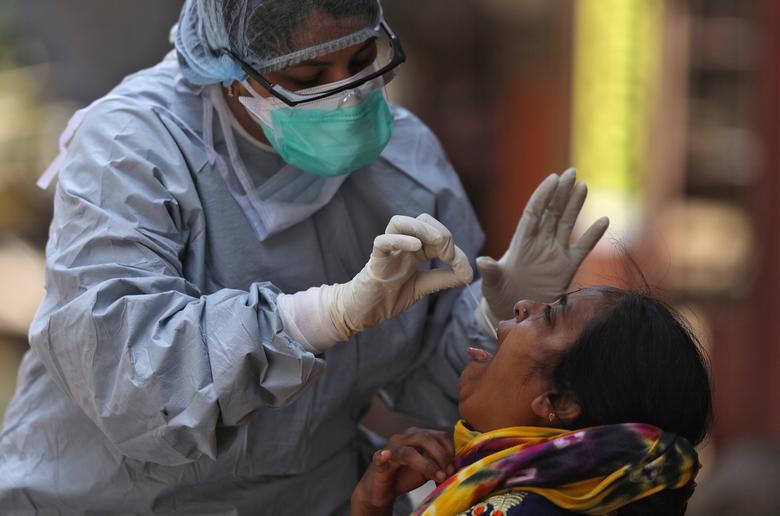 A doctor takes a swab from a woman to test for COVID-19 in Dharavi, one of Asia’s largest slums, in Mumbai. Photo: Reuters/Francis Mascarenhas

New Delhi: The Maharashtra government has issued a new order with effect from April 10 for people delivering essential services and who have not been vaccinated yet to carry negative RT-PCR reports valid for 15 days. This directive is issued for staff engaged in manufacturing units, e-commerce services and restaurants, amongst other services.

A health ministry official told Times of India, “If an essential worker is asymptomatic and has tested negative on RT-PCR, then the certificate would be valid for 15 days unless he/she develops symptoms in between or is termed as a close contact of an infected person. In that case, she will have to undergo the RT-PCR test again.”

The state health ministry has said these measures are an attempt to catch “super spreaders”, according to The Times of India.

However, Sudhir Mehta, president of Mahratta Chamber of Commerce Industries and Agriculture, told The Hindu Business Line, “Mandatory RT-PCR tests every 15 days in Maharashtra for industry, trade and services is completely untenable and without scientific basis. We don’t have the lab capacity and this will delay tests for those with symptoms. For half the cost, we can vaccinate everyone” in the state.

Per WHO, the incubation period for SARS-CoV-2 is about 3-5 days, and an infected person can develop the disease generally within five days and up to 14 days after contracting the virus.

P. Srinivisan, technical director at Neuberg Diagnostics, Gurugram, told The Hindu,“The validity of an RT-PCR test is restricted to the day of testing. You can still pick it up the next day and it could turn out to be positive.”

Dr D.B. Kadam, a senior physician heading a COVID-19 task force in Pune, told Times of India, “Close contacts of an infected person often test negative initially but the same individual, when tested on the fifth day of coming in contact with infected person, tests positive. This is because the most common incubation period for the coronavirus is five days of contracting the virus. This may go up to 14 days.”

The Wire Science@TheWireScience
3 Following 15.5K Followers
Sea sponges don’t move. At least, that’s what a lot of people used to think about these aquatic invertebrates. But… https://t.co/chbZAfK7XC
7 hours ago
1
It’s not clear exactly how Facebook decides that a person is interested in topics such as “oxygen” or “genetic diso… https://t.co/tDyJyCS1Dx
8 hours ago
2
On Wednesday, India's overall death toll crossed over a quarter million Experts believe the official numbers gross… https://t.co/iC39P2dwSl
9 hours ago
Prabuddha Kundu said, “patents are not written as books for everyone to copy. They are written in broad terms, not… https://t.co/DJrAa5H8XH
10 hours ago
1
The Hill reported, “Fauci noted that although the NIH did fund a project at the Wuhan lab, it was not meant for ‘ga… https://t.co/gkWUy608KX
11 hours ago
1 4
In a new report, the International Energy Agency (IEA) takes stock of which and how much mineral resources we’ll ne… https://t.co/PRmxVwfRai
12 hours ago
1 4
“For many families, the cost of a cylinder is their entire month’s income,” said Sharma Menon. “They are devastated… https://t.co/YbPxmnzYwJ
13 hours ago
3
As participants wait for the dung and urine mixture on their bodies to dry, they hug or honour the cows at the shel… https://t.co/HODTYvzCLe
14 hours ago
2
“As of now it is very difficult for us to say where these dead bodies have come from,” said M.P. Singh, the top gov… https://t.co/gs4O8QWAJM
15 hours ago
5
Citizen science involves large numbers of “ordinary” people participating to collect huge amounts of data – somethi… https://t.co/BLrSP0liUp
1 day ago
2 2
Rocky outcrops are a type of small natural feature: spatially diminutive natural entities with highly variable envi… https://t.co/ajVtewY9P3
1 day ago
1 1
There is little doubt that the Government of India is making cynical use of its COVID-19 epidemic to promote Ayurve… https://t.co/ZwiMUn59Lk
1 day ago
2
It is only through a combination of proactive release of information by public authorities and responsible journali… https://t.co/CfQLdVmYKc
1 day ago
1
The pursuit of human metrics has a rich and fascinating history, dating back to the ancient Greeks, who viewed prop… https://t.co/besF2H8VpV
1 day ago
1 3
The COVID-19 pandemic has disrupted lives the world over for more than a year. Its death toll will soon reach three… https://t.co/nPjA5OAetX
1 day ago
5 7
Contact us