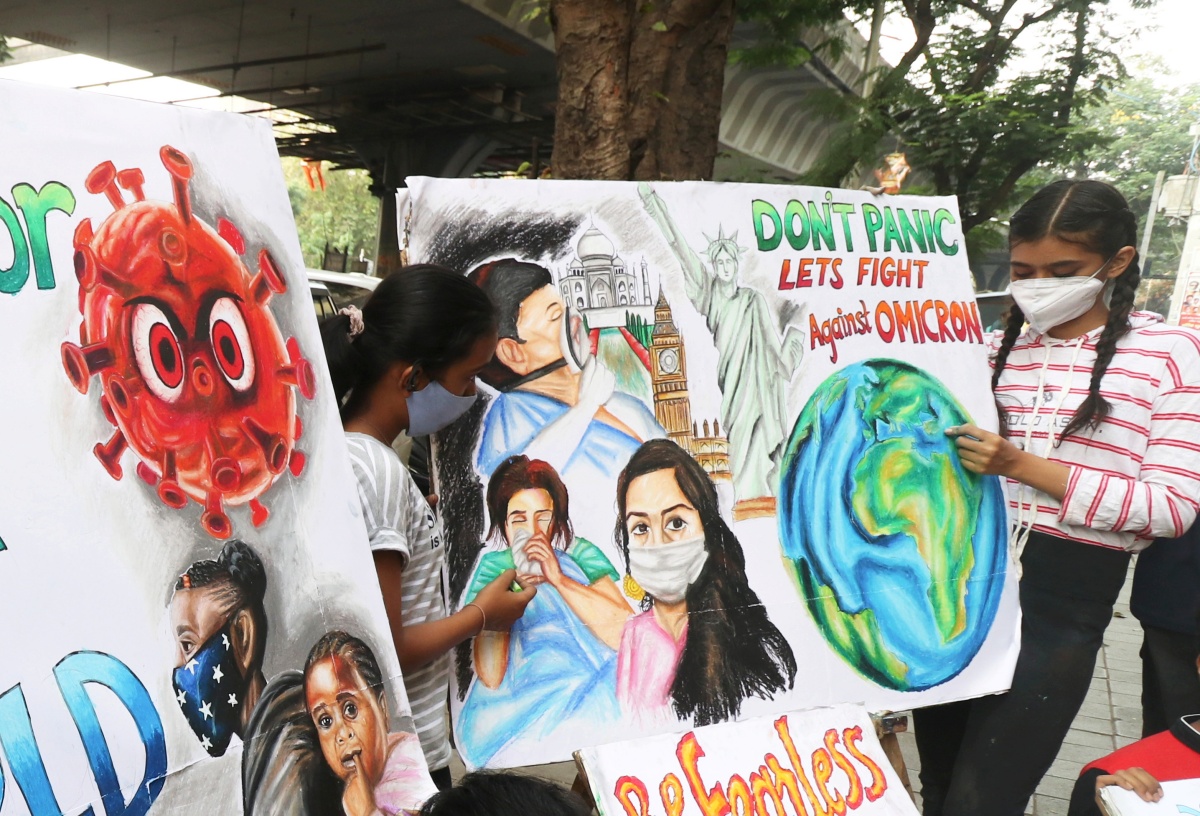 Students apply finishing touches to paintings made to create an awareness against the new coronavirus omicron variant, in Mumbai, November 29, 2021. Photo: Reuters/Niharika Kulkarni

New Delhi: The consortium of laboratories set up by the Union health ministry to study the genomic sequences of coronavirus strains in India has recommended that a third, booster dose should be considered for certain groups, but only after the eligible population is fully vaccinated first.

The recommendation by the Indian SARS-COV-2 Genome Consortium (INSACOG) comes amid uncertainty around the efficacy of existing vaccines to combat the omicron variant. While there is no evidence yet to show that vaccines are less effective, the fact that the variant has several mutations on the spike protein – which existing vaccines target – has become an issue of concern.

Though INSACOG is not an advisory body, it is the first official Indian body to recommend booster doses. A decision on booster doses will be made by the National Technical Advisory Group on Immunisation (NTAGI).

In its weekly bulletin, dated November 29, INSACOG said, “Vaccination of all remaining unvaccinated at-risk people and consideration of a booster dose for those 40 years of age and over, first targeting the most high-risk/high-exposure may be considered, since low levels of neutralising antibodies from current vaccines are unlikely to be sufficient to neutralise omicron, although risk of severe disease is still likely to be reduced.”

On Thursday, the Indian government confirmed two cases of the omicron variant in India. While one is a South African national who has already left the country, the second person is a resident of Bengaluru. Both were fully vaccinated.

INSACOG’s advisory also said based on preliminary data, “it is likely that population immunity and vaccine-induced immunity may not sufficiently block” omicron’s propagation. However, it also noted that further studies are needed to “quantify the immune escape and transmissibility aspects” of the variant.

“The clinical aspects such as severity of illness in naïve, previously infected, or vaccinated subjects are currently unknown,” the bulletin said.

Anurag Agrawal, the director of CSIR-IGIB which is part of INSACOG, told The Hindu that the forum’s recommendation “reflected the World Health Organisation’s views on the same about first vaccinating the unvaccinated and then considering boosters based on evidence”.

“The evidence right now about potential immune escape, vaccination breakthroughs and possible booster need, is all that we have conveyed. In a few more weeks we’ll have better information [from South Africa] on whether omicron is linked to increased disease severity” he said.

Several Western countries have already approved booster doses, six months after full vaccination. The WHO has repeatedly criticised the approval of booster jabs, saying the target should first be to fully vaccinating populations of all countries.

Also Read: This Is What We Know So Far About the Omicron Variant

The health ministry of Friday issued an FAQ about omicron, saying it is important to note that the strain was declared as a variant of concern “based on the observed mutations” and the possibility of increased transmission and immune evasion, and preliminary evidence of detrimental change in COVID-19 epidemiology, such as increased reinfections.

“[D]efinitive evidence for increased remission and immune evasion is awaited,” the ministry said.

While acknowledging that omicron is likely to spread in India, “the scale and magnitude of rise in cases and most importantly the severity of disease that will be caused is still not clear”, the statement said.

“While there is no evidence to suggest that existing vaccines do not work on omicron, some of the mutations reported on [the] spike gene may decrease the efficacy of existing vaccines. However, vaccine protection is also by antibodies as well as by cellular immunity, which is expected to be relatively better preserved,” the statement added.

So vaccines are expected to continue to be protective against severe disease and the priority continues to be to increase vaccination coverage. “If eligible but not vaccinated, one should get vaccinated,” the statement finished.

India has thus far administered more than 126 crore doses but is unlikely to meet the government’s own target of fully vaccinating 94 crore adults. Around a third of eligible Indians have been fully vaccinated, according Our World in Data. And according to the Co-WIN dashboard, since the week of October 9-15, the number of people taking the second dose has been higher than those receiving their first.