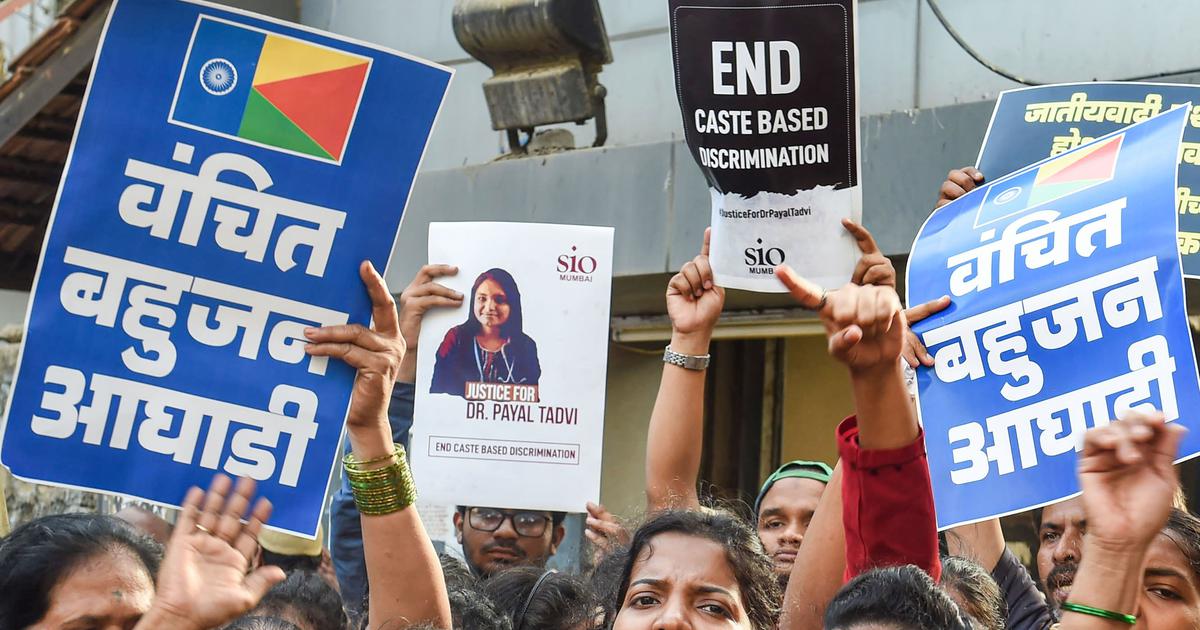 Should Publishing Journal Articles Be Mandatory for PhD Students?

New Delhi: Despite the fact that systemic caste-based harassment in Indian medical institutions is well documented, the leading doctors’ union has remained in denial. The Indian Medical Association’s (IMA) position hasn’t changed even after the death by suicide of Payal Tadvi, a 26-year-old gynaecologist from a Bhil Adivasi Muslim community. She allegedly killed herself after facing casteist harassment by three of her fellow doctors.

He death prompted protests across the country and after wide-spread media coverage, swift police action and the arrest of the three doctors, the IMA has finally issued a letter to their members, vaguely mentioning casteism in the medical field.

Last week The Wire reported that the current leaders of the IMA, Dr Shantanu Sen (president) and Dr R.V. Ashokan (general secretary) preferred not to acknowledge the presence of casteism in the medical profession.

In the IMA’s letter to their members, they continue to deny the presence of routine and systemic caste-based harassment in medicine, despite dozens of testimonies and suicides linked to this issue. But, their letter says that they do not “condone any discriminatory behavior”.

On the Payal Tadvi case, the IMA says, “Allegations of casteist bias and slur have surfaced in the index case. This, if true is a matter of serious concern which has to be addressed.”

But on general casteism in the field they say, “As a fraternity the medical profession is miles ahead in overcoming the barriers of caste, religion and politics. There is no discrimination on any ground within the fraternity or with the patients. However individual bias and behavior can be at variance to this unwritten code of conduct. IMA does not condone any discriminatory behavior.”

In these two statements, the IMA has not unequivocally acknowledged or condemned caste discrimination, but said that in case it exists, then it would not be condoned by them. Whether this would mean doctors would be penalised is not clear yet.

They also don’t have a written code that explicitly discourages caste discrimination, but say that doctors should follow their “unwritten code.”

When asked by The Wire last week if they have ever done an audit of the number of oppressed caste doctors part of their body, Ashokan had laughed and said, “Why should we?”

All the same, the IMA has now constituted an all-male fact finding team to examine the case of Payal Tadvi. The mandate of the committee is apparently to “evaluate the background situation and the critical factors that led to the unfortunate suicide” of Tadvi. They say this is their “cohesive effort to ascertain the social and hierarchical dimensions and the dynamics inside the medical profession” and to “study comprehensively the complex issue.”

Also Read: The Culture of Professional Colleges Failed Dr Payal Tadvi – Just as It Did Me

While the IMA wants to constitute its own committee to look into Tadvi’s death, her medical college has already come out with a report that has recorded the harassment she faced from these seniors, with testimonies from at least thirty people. The three doctors have also been booked under the Scheduled Castes and Tribes (Prevention of Atrocities) Act and sent to judicial custody.

IMA to continue focus on “work load” of doctors

As in their public statements to the media, IMA doctors from around the country have chosen to explain Tadvi’s death as well as other suicides in the medical profession linked to caste discrimination, as somehow unrelated to caste.

IMA doctors routinely explain it simply as a case of “stress” related to “work load”.

In their letter to doctors, the IMA again repeats this multiple times. They say that doctors “especially in government hospitals”, have an “inhuman work load and suffer burn out and depression”. They also say that doctors in government hospitals particularly, have “poor working conditions” and an “abnormal overload of work” and face an “ever present ridicule for deficiency of clinical sills.”

The Wire Science@TheWireScience
3 Following 26.0K Followers
. @TheWireScience found that between 2011 and 2020, 28,196 clinical trials were registered – with 7,467 trials in 2… https://t.co/TFadK5phui
17 hours ago
1
Like Sergey Zimov’s ‘Pleistocene Park’, George Church’s company Colossal plans to repopulate the Arctic tundra with… https://t.co/g72AV8pXq7
17 hours ago
Around 3,000 workers across France have been suspended from work for failing to comply with mandatory COVID-19 vacc… https://t.co/X44OXsyV52
19 hours ago
2
“In Uttar Pradesh, there is little attention paid to the weak public healthcare system... It is the poor surveilla… https://t.co/Kq3BnZivpc
20 hours ago
2 2
"What's worse is that the postcolonial arguments for celebrating the “hybridity” of Indian science are precisely th… https://t.co/WvUFFOXRpc
21 hours ago
2
You know we are in deep trouble when India’s new science minister @DrJitendraSingh describes Gandhi’s ahimsa as 'si… https://t.co/uCkPNmVcaG
21 hours ago
2
In the last ten years, 311 trial participants have died due to their participation in a trial, and their relatives… https://t.co/mAjIbUwfmk
1 day ago
1 2
RT @ronaklmno: New Story! If you are interested in clinical trials in India, here are some new graphs & facts that you have likely not see…
1 day ago
20
According to a @nytimes report, politics began to influence ICMR’s approach “early last year”, beginning with the g… https://t.co/xBxfzr7Y7y
2 days ago
2 4
Billionaire Jared Isaacman, nurse Hayley Arceneaux, aerospace engineer Chris Sembroski and geoscientist Sian Procto… https://t.co/qypqUFdyrf
2 days ago
1
The residents of Firozabad say the scale of the ongoing dengue outbreak in this western Uttar Pradesh district is u… https://t.co/bcliq2IMN5
2 days ago
"Ayurveda and yoga as symbols of Hindu sciences have always been a part of the Hindu nationalist worldview. For mo… https://t.co/0AwQbBROVk
2 days ago
1 2
Walter Tschinkel's work has shown that we can eventually construct phylogenetic trees of ants based on their nests.… https://t.co/H8T8gwZnsJ
2 days ago
According to the NITI Aayog’s estimates, India will rely on coal power to a significant extent – 42-50% of the ener… https://t.co/Iwd4fV5GEp
2 days ago
1 2
The ICMR suppressed data that contradicted the government’s rosy predictions, according to researchers that the… https://t.co/5elByaevb3
2 days ago
1 2
Contact us