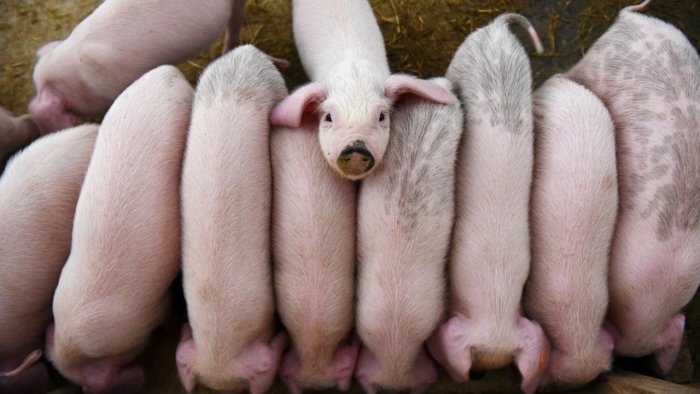 Mutations: Does SARS-CoV-2 Have a Fixed Number of Moves in Its Arsenal?

Aizawl: More than 80 pigs died in south Mizoram’s Lunglei district over the last two weeks, triggering panic in the area that is near the Bangladesh border, an official said on Sunday.

The 87 deaths, which happened in the Lungsen village, have caused losses to the tune of Rs 40 lakh, he said.

“Though the cause of the deaths is yet to be ascertained, it is suspected that the animals died due to African Swine Fever (ASF),” said Lalhmingthanga, the joint director of the animal husbandry and veterinary department.

The first death was reported on March 21, following which veterinary officers were sent to the village to ascertain the cause, he said.

As per the enzyme-linked immunosorbent assay (ELISA) and polymerase chain reaction (PCR) tests on tissue samples and serum samples, the dead pigs were confirmed free of Porcine Reproductive and Respiratory Syndrome (PRRS) and Classical Swine Flu (CSF), he said.

The confirmatory test for ASF is yet to be done at the National Institute of High Security Animal Diseases (NIHSAD) in Madhya Pradesh, Lalhmingthanga said.

The preliminary test will be done at the College of Veterinary Science and Animal Husbandry on Monday to ascertain whether the dead pigs are suspected to be infected with AFS, he said.

Also read: Did African Swine Fever Come To India Because We Left the Door Open?

The government has already sounded alert for ASF in the state and declared Lungsen village as an infected area with prohibitory orders clamped under CrPC Section 144 on April 2, the official said.

Though the actual disease is yet to be confirmed, the measure is being taken in accordance with ASF Prevention and Containment National Action Plan, he said.

An investigation team led by Animal Husbandry and Veterinary (Disease Investigation and Epidemiology) deputy director M. Zohmingthangi will visit Lungsen village on Monday to stake stock of the situation, he said.

The team will collect tissue and blood samples to be sent for tests, the official said.

Lalhmingthanga said that the disease was suspected to be transmitted through the import of pigs and smoked pig meat from the neighbouring states, and Bangladesh.

The first death was reported near hotels where imported pig meats were largely consumed.

So far, the state has not reported any outbreak of African Swine Fever.

The Wire Science@TheWireScience
3 Following 15.1K Followers
Those who complained about the Tablighi Jamaat event last year when the COVID-19 cases were only a few hundred, are… https://t.co/TxDrPjTJJC
11 hours ago
1 4
RT @1amnerd: According to the FDA, the US has thus far administered the vaccine to 6.8 million people and that, "right now, these adverse e…
11 hours ago
10
Methane concentrations in the atmosphere today are 150% higher than before the industrial revolution. There is an… https://t.co/kY0HAveQLd
12 hours ago
3
At the rate of 3.5 million doses per day that India has averaged in April, the doses in stock would not last more t… https://t.co/MvcmD9rla8
13 hours ago
4 4
India said on Tuesday it would fast-track emergency approvals for foreign-produced COVID-19 vaccines that have been… https://t.co/6AvUshSFxB
14 hours ago
3
If we do learn to master both our technology and our social systems and embark on those great journeys, it’ll be Ko… https://t.co/eQCDmVB5hj
15 hours ago
1 2
On April 12, 1961, Yuri Gagarin launched in the Vostok 1 spacecraft from Baikonur Cosmodrome and orbited around the… https://t.co/UKvbocbGyI
16 hours ago
1
India has approved the use of Russian Sputnik V COVID-19 vaccine, the Russian Direct Investment Fund (RDIF) said on… https://t.co/PIqmkpkyvc
17 hours ago
3
At least nine COVID-19 patients died on Monday at two different hospitals at Nallasopara. A police official said a… https://t.co/MJhdQv2LCY
19 hours ago
1
Japan plans to release into the sea more than 1 million tonnes of contaminated water from the destroyed Fukushima n… https://t.co/EvSEyhT6SN
20 hours ago
1
Even as Adani forced Burragubba into bankruptcy following a number of failed legal actions to halt the coal mine in… https://t.co/xfndw9EXYb
21 hours ago
1 2
You should monitor for these symptoms up to 28 days after receiving the jab: - breathlessness - pain in the chest o… https://t.co/QFxeYtv9Md
22 hours ago
3 4
Most of the methane emitted from aquatic ecosystems is produced by micro-organisms living in deep, oxygen-free sedi… https://t.co/gLnW5RkzbN
23 hours ago
3 6
India's overall tally reached 13.53 million, surpassing Brazil's 13.45 million cases, according to data compiled by… https://t.co/HANebOs4ZN
1 day ago
2 2
A state-run hospital in Bihar’s capital has courted controversy by declaring a COVID patient dead and handing over… https://t.co/LVlF06mchB
1 day ago
2 4
Contact us