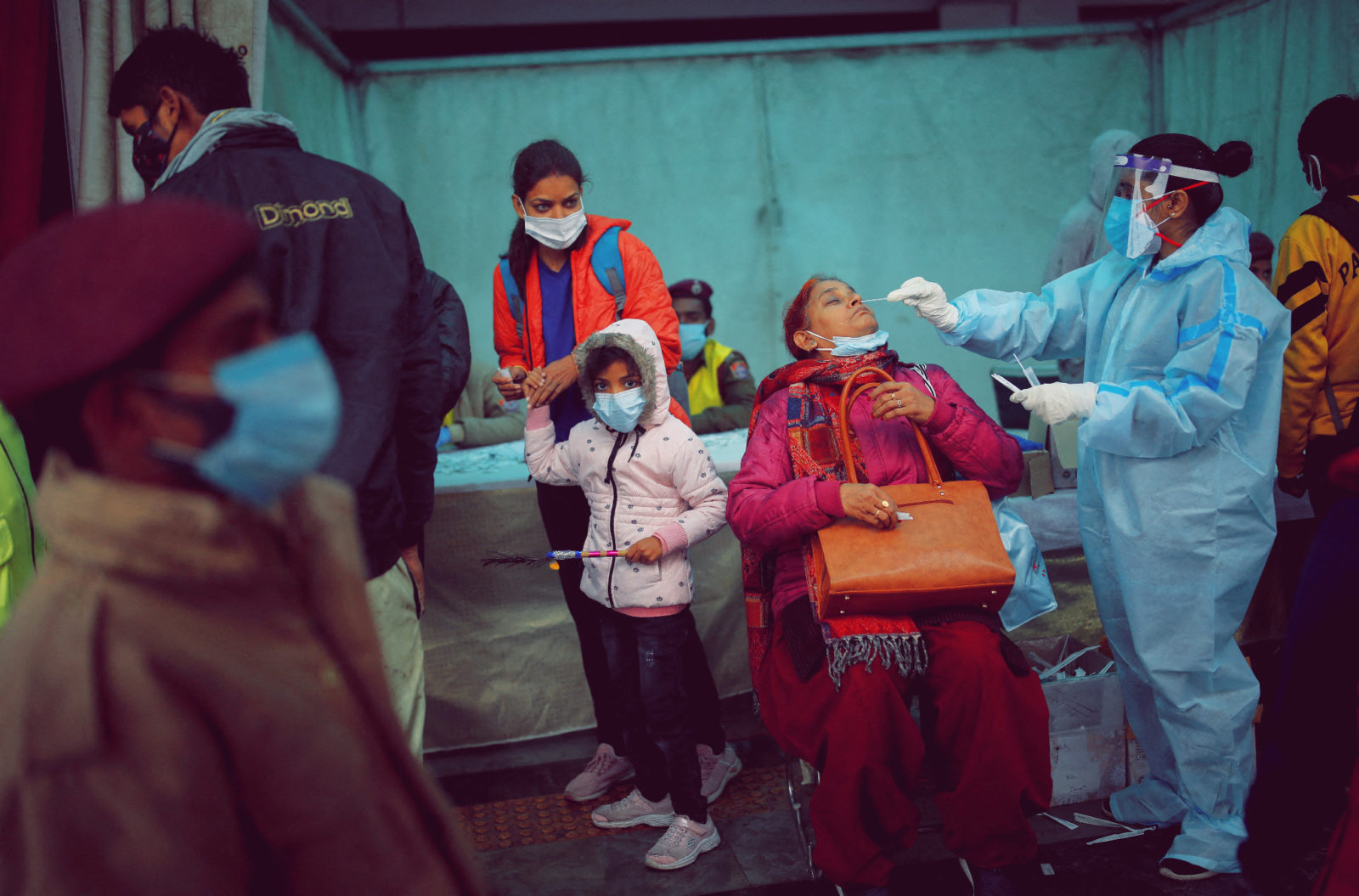 A healthcare worker collects a COVID-19 test swab sample from a woman at a railway station in New Delhi, January 5, 2022. Photo: Reuters/Adnan Abidi

New Delhi: Ever since India had its first case of the newest variant of concern of the novel coronavirus last month, many people have asked after testing positive if their body is now hosting the omicron variant.

Thanks to the hype and nearly 24/7 news coverage of the new wave across the world, caused in many parts by the omicron variant, people have had a heightened interest in knowing which variant they’re being affected by.

If you’re interested as well, here’s the bottomline: investing efforts in knowing this is not fruitful at the individual level.

There are two parts to understanding why.

Part I: There’s no way to know

Since the COVID-19 pandemic began, PCR tests have been regarded as the gold-standard to detect the presence or absence of the novel coronavirus in nasal and throat swabs collected from an individual. There have been five variants of concern thus far. And PCR tests have continued to remain useful in detecting the presence of all these variants.

A PCR kit amplifies the virus’s genetic material – its RNA – present in a swab. The RNA has many important parts, and a researcher looks for the presence of these parts in a sample using PCR. If a combination of these parts is present, the researcher will know that the sample contains the virus.

However, the kits can’t know which variant of the virus it is. So if you go to a lab and provide a sample for a PCR test, the test results won’t show the name of the variant.

We can know specific information about the exact variant only by sequencing the RNA from a sample that has tested positive. (A sequencer is a machine that ‘reads’ the RNA from start to finish and spells out all the genes and the mutations it has.)

In India, currently, there are 28 labs that the government has allowed to sequence the genome of COVID-positive samples. These labs are part of a group called the Indian SARS-CoV-2 Genomics Consortium (INSACOG). It has both government and private labs.

An individual can’t send their sample for genome-sequencing directly to these labs. According to the government’s guidelines, every state government sends about 300 positive samples per month, from select sites, to a lab that has been assigned to that state.

State officials select these positive samples at random. Once they have reached a lab and have been sequenced, the lab informs the government about the results. The labs don’t inform any private individuals. This is because the samples have been chosen randomly and don’t include the individual’s details.

If a private individual is not informed, what is the purpose of genome-sequencing?

It’s important for the government to know which strain of the virus is dominant in a given part of the country at a certain time. Knowing this helps governments – state and the Centre – to adjust their COVID response in that part accordingly.

For example, the second wave that took place in March-May last year was driven by the spread of the delta variant, and the most important thing governments could do was keep ICU beds and supplemental oxygen available.

For another example, the current wave is being driven by the omicron variant – which appears to be causing a large number of infections but not many of the people getting infected require hospitalisation. So governments are keener this time about people isolating themselves properly at home.

There is another purpose. In case there is a cluster outbreak – such as some contiguous parts of a city or two or three adjacent districts reporting more cases than others – governments tend to send samples from these places for sequencing. The idea is to find out if existing variants are causing the outbreak or if a new variant has emerged.

You might have heard that some PCR kits can detect the omicron variant. This is not the full picture.

But there are two caveats. First, the alpha variant also lacks the S-gene. This is why PCR tests for the omicron variant can only suggest the presence of the omicron variant – not confirm it. Second, there’s only one major manufacturer in the world of PCR kits that can look for the absence of the S-gene: US-based Thermo Fisher Scientific. So these kits are in short supply.

The rapid antigen tests, which you can self-administer, can’t detect the variant.

But does an individual lose out on something by not knowing which variant they’ve been infected by? No.

First, the isolation guidelines are the same for infection by all variants

Second, the treatment protocol – which treats symptoms like cough, fever, headache, nausea and cold, among others – is also mostly the same.

Third, those who are recovering at home: don’t consume medicines willy-nilly. Please consult a doctor first, have nutritious food, drink lots of fluids and get rest.

Fourth, for those who have been hospitalised with severe COVID-19, the Indian Council of Medical Research has issued a detailed treatment protocol. Doctors follow this.

So next time an individual tests positive, don’t ask, “Is it omicron?”