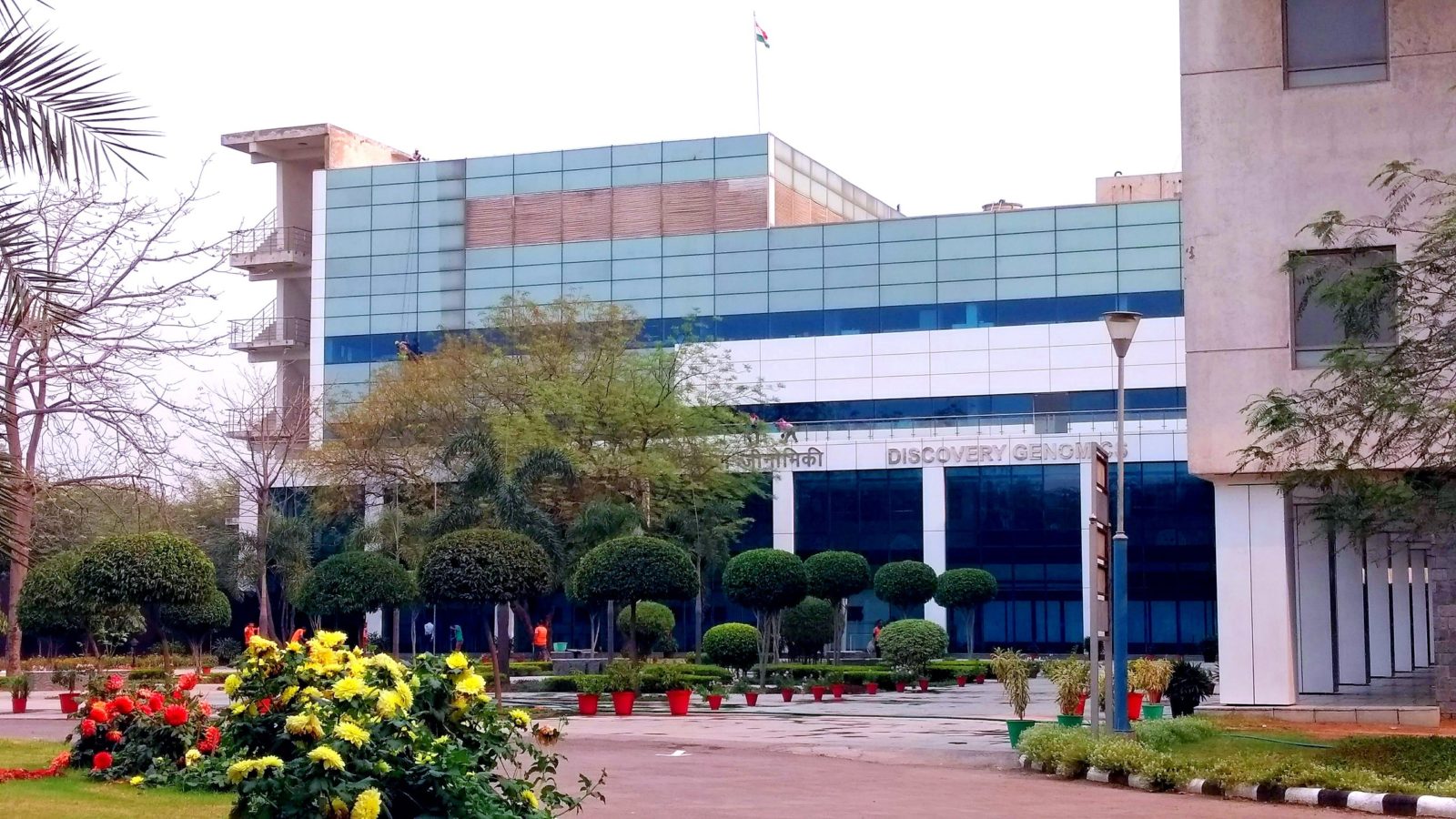 A view of a building in the CSIR-IGIB campus, New Delhi. Photo: Singhprtk/Wikimedia Commons, CC BY-SA 4.0

New Delhi: The detection of a new variant of the novel coronavirus, dubbed ‘omicron’, has moved the spotlight back to an oft-overlooked aspect of  the world’s, and India’s, pandemic management strategy: genome-sequencing.

In a country with a genome-sequencing programme, scientists at labs receive swabs collected from people with COVID-19 around the country. They then isolate the viral material from the swabs, identify the RNA therein and sequence it, i.e. determine its full composition.

Since the omicron variant hit the headlines late last week, the Union health ministry has issued at least two statements saying the pace of genome-sequencing has to be ramped up. Numerous public health experts and agencies around the world, including the WHO, have also held that sequencing is likely to be key in the world’s fight against the omicron variant, or for that matter any other variants.

After a viral genome has been sequenced, scientists will be able to identify its mutations and its closest genetic relatives. And based on this, we will know which variant it is and what advantages its mutations may and may not confer.

India launched its genome sequencing effort on December 30, 2020. The Indian government formed the Indian SARS-CoV-2 Genomics Consortium (INSACOG), comprising 10 laboratories and led by the National Centre for Disease Control (NCDC), New Delhi. The government also announced that 5% of all positive samples would have to be sent to these facilities to be sequenced.

In April 2021, in a questionable move, the government modified its strategy to say every sentinel site would have to send 30 samples every month for sequencing. The number of sentinel sites in each of India’s states ranges from one to 21. This would mean at most 630 samples per month – which is much lower than 5% of the number of people who test positive every month.

INSACOG’s efforts were prominently in the news during India’s second major COVID-19 outbreak, in the first quarter of this year. At the time, Rakesh Mishra, the head of one of the participating laboratories, had told Reuters that the government had ignored the consortium’s warning of a new and potentially dangerous variant on the horizon. This was the delta variant.

But how has INSACOG, and India’s genome-sequencing efforts more broadly, fared at all other times? This reporter filed an application under the Right to Information (RTI) Act with the NCDC on September 6, 2021, to this end. The NCDC replied on October 1.

In response to media reports, NCDC director Sujeet Sing had said on August 5 that it was “misleading”  and “factually incorrect” to say efforts to track variants through genome-sequencing had tapered off. The RTI reply says exactly the opposite: the number of samples sequenced declined after June, and almost halved through July and August.

This period coincides roughly with the time COVID-19 cases had started to decline after the second outbreak.

Mishra, now director of the Tata Institute of Genetics and Society, Bengaluru, told The Wire Science that the end of the second surge would have been a good time to increase sequencing. “This gives an advantage because this will give policymakers time to have a plan in place before a new wave has begun, if a new variant is emerging.”

He also stressed the importance, in this particular case, of not sequencing samples just to meet monthly targets. “The canvas has to be wide and spread across states, especially populous ones, because a new variant can literally emerge from anywhere,”  he said.

Now, according to a data portal managed by the Department of Biotechnology and the Institute of Genomics and Integrative Biology, New Delhi, of the 70,741 genomes that INSACOG has sequenced and analysed until November 29, Maharashtra had contributed 27.4% of samples and Kerala, 9.9%. (Both Maharashtra and Kerala have their own genome-sequencing initiatives in addition to INSACOG.)

Just two states providing 37.3% of INSACOG’s samples means some or all of India’s other states, and UTs, didn’t contribute as much as they should have.

“In some of the states, the health departments and the bureaucracy understand the significance of genome-sequencing, even if it does not lead to media frenzy like vaccination and tests conducted,” a scientist working at one of the 10 INSACOG laboratories told The Wire Science (on anonymity, because he wasn’t authored to speak to the media).

“And they are keen on sending samples. But in most of the other states, that is not the case.”

On November 27, the Union health ministry wrote to the chief secretaries of all states to pull their socks up on this front. (The Wire Science has a copy of the letter.)

Then again, the sequencing programme couldn’t have slowed only because states weren’t sending enough samples. For one, states need to properly label and transport samples, such that they maintain their integrity until they are sequenced. For another, the samples need to contain a sufficient amount of the virus’s genetic material for the sequencing machines to go through.

A third point of potential failure is that genome-sequencing is cost-intensive. If a laboratory doesn’t have enough samples to sequence together, in one go, it may not be able to sequence even what it does have. “There are cheaper ways of doing it,” Mishra said, “but that is not always feasible.”

Then, of course, is the issue of the amount of time between the moment a sample is dispatched and when a laboratory finishes sequencing it. In response to a question in the Rajya Sabha on July 27, 2021, Union health minister Mansukh Mandaviya said it was 7-10 days. But the unnamed scientist quoted above said it is typically close to a month.

Curiously, when this correspondent asked NCDC through the RTI application about the dispatch-to-sequence time, its reply was: “No such information is available with NCDC.”

To be clear, the NCDC is the nodal facility for the genome-sequencing consortium, and also falls under the Union health ministry. So while the health minister has a figure for the dispatch-to-sequence time, the NCDC has said it does not.

Its claimed ignorance didn’t end there. Another important aspect of sequencing is the task of identifying the viral material’s lineage. For example, the omicron variant has the Pango lineage designation of B.1.1.529, which means it is a descendant of the B.1 strain.

Also read: This Is What We Know So Far About the Omicron Variant

So can all INSACOG laboratories perform this lineage-assignment analysis? And how much time does it take to go from sequencing to analysis?

On both counts, the NCDC said: “No such information is available with NCDC.”

Finally, the NCDC also said it didn’t have information about the amount of money allocated to INSACOG.

This reporter filed the first appeal to the NCDC’s replies that only partly answered the questions or not at all. The response to the appeal arrived on November 8, denying more information: “The information provided was appropriate, as per the availability in this office, which is as per the provisions of RTI Act, 2005. The appeal is thus disposed of.”

Relative to other countries, India’s genome-sequencing performance remains dismal. According to GISAID, India had shared 81,791 sequences to the GISAID database as of November 29 – making up only 0.21% of the sequences from all contributors. And since March, India hasn’t been able to better its record of sequencing only 1% of all samples generated in the country.

In contrast, the UK has one of the most advanced genome-sequencing systems in the world and has shared 12% of all genomes on GISAID. Denmark is at the top with 46% and Kyrgyzstan is at the bottom with 0.008%.

Sharing genome data on the GISAID platform is important because doing so allows the global scientific community to understand how the virus is changing in different parts of the world.