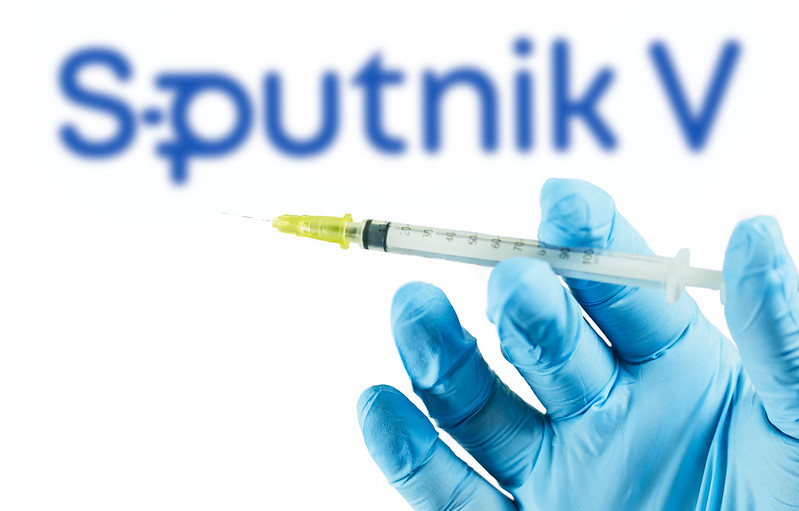 The logo of Sputnik V is seen in the background of a syringe in this illustration. Photo: Tim Reckmann/Flickr CC BY NC 2.0

New Delhi: Serum Institute of India (SII) will start production of the Sputnik V vaccine at the company’s facilities in September, the Russian Direct Investment Fund (RDIF) said on Tuesday.

As per the agreement between RDIF and SII, the parties intend to produce over 300 million doses of the vaccine in India per year.

“The first batch of Sputnik vaccine is expected to be produced at SII’s facilities in September,” RDIF said in a statement.

As part of the technology transfer process, SII has already received cell and vector samples from the Gamaleya Center. With their import approved by the Drug Controller General of India (DCGI), the cultivation process has begun, it added.

RDIF has earlier reached agreements with a number of pharmaceutical companies in India such as Gland Pharma, Hetero Biopharma, Panacea Biotec, Stelis Biopharma, Virchow Biotech and Morepen for the production of the Russian vaccine, the statement said.

India is the leading production hub for the production of the Sputnik vaccine, it added.

“RDIF is delighted to cooperate with Serum Institute of India, the world’s largest vaccine manufacturer. This strategic partnership is a major step to substantially increase our production capabilities demonstrating a perfect example of joining forces and expertise to save lives both in India and around the world,” RDIF CEO Kirill Dmitriev said.

With technology transfer underway, “we expect the first batches of the vaccine to be produced jointly with SII in coming months,” he added.

As of now, Sputnik V vaccine has been registered in 67 countries globally, RDIF said.

“We hope to make millions of doses in the coming months with trial batches starting in the month of September,” SII CEO Adar Poonawalla said.

“With high efficacy and a good safety profile, it is critical that the Sputnik vaccine is accessible in full measure for people across India and the world, he added.

The efficacy of Sputnik V is 97.6% based on the analysis of data on the coronavirus infection rate among those in Russia vaccinated with both components of Sputnik V from December 5, 2020, to March 31, 2021, RDIF said.

The Wire Science@TheWireScience
3 Following 25.8K Followers
Another by-product of crocodile-human conflict is retaliatory killings, in which humans destroy crocodile eggs or k… https://t.co/q2oGaws1ou
6 hours ago
2
An Oxfam India report found that the average life expectancy in India was up to 69 years by 2015 but that among peo… https://t.co/CmuKUoPrY2
7 hours ago
1
More than 200 samples of genetic sequences isolated from early COVID-19 patients in China, and which had been remov… https://t.co/FJXdkXqwpk
19 hours ago
More and more climate scientists are saying that the recent extreme rainfall is a direct fallout of global warming… https://t.co/x7fnXEhHf2
20 hours ago
Existing crop of COVID-19 vaccines offer high protection against severe COVID-19, hospitalisation and deaths. We n… https://t.co/l2kbSDRT2t
21 hours ago
2
RT @shubhamsoni__: My favourite read for the fortnight is here! I read this coloumn with utmost curiosity and belief that today I am going…
22 hours ago
1
Our survival instinct ensures we fear large carnivores. The people in flood-hit Sangli, likely experienced this re… https://t.co/G3gHttBVOg
22 hours ago
1 1
Inequality in outcomes stems from inequality in access to medical services and the wider living conditions. Our un… https://t.co/SS0DKT3HZy
23 hours ago
The Supreme Court directed that the environmental clearance already granted should be kept in abeyance until the ma… https://t.co/JQhYCoeuLd
24 hours ago
1
Edgar Allan Poe believed a machine could calculate, because calculation was a fixed and determinate process, but no… https://t.co/YUC3obAWDh
1 day ago
6 5
The gender disparity in India’s COVID-19 vaccine drive has narrowed, govt data showed, as pregnant women are now al… https://t.co/QBWciALE2T
1 day ago
2
Psychotherapy and imagination aren’t the only ways Deisseroth peers into the brain. Seeking answers to tough ques… https://t.co/HuOyBhFaZx
1 day ago
2 4
By the very fact of their isolation, islands permit rapid evolutionary changes and the formation of new species, al… https://t.co/RIy2eK9khZ
1 day ago
2
The government on Tuesday said that the reproductive number that indicates the speed at which COVID-19 is spreading… https://t.co/5XUSOGRWig
1 day ago
It is their yearning for friendship and sharing, even for classroom fights, and their eagerness to meet up with the… https://t.co/1GFQX2InT3
1 day ago
2
Contact us