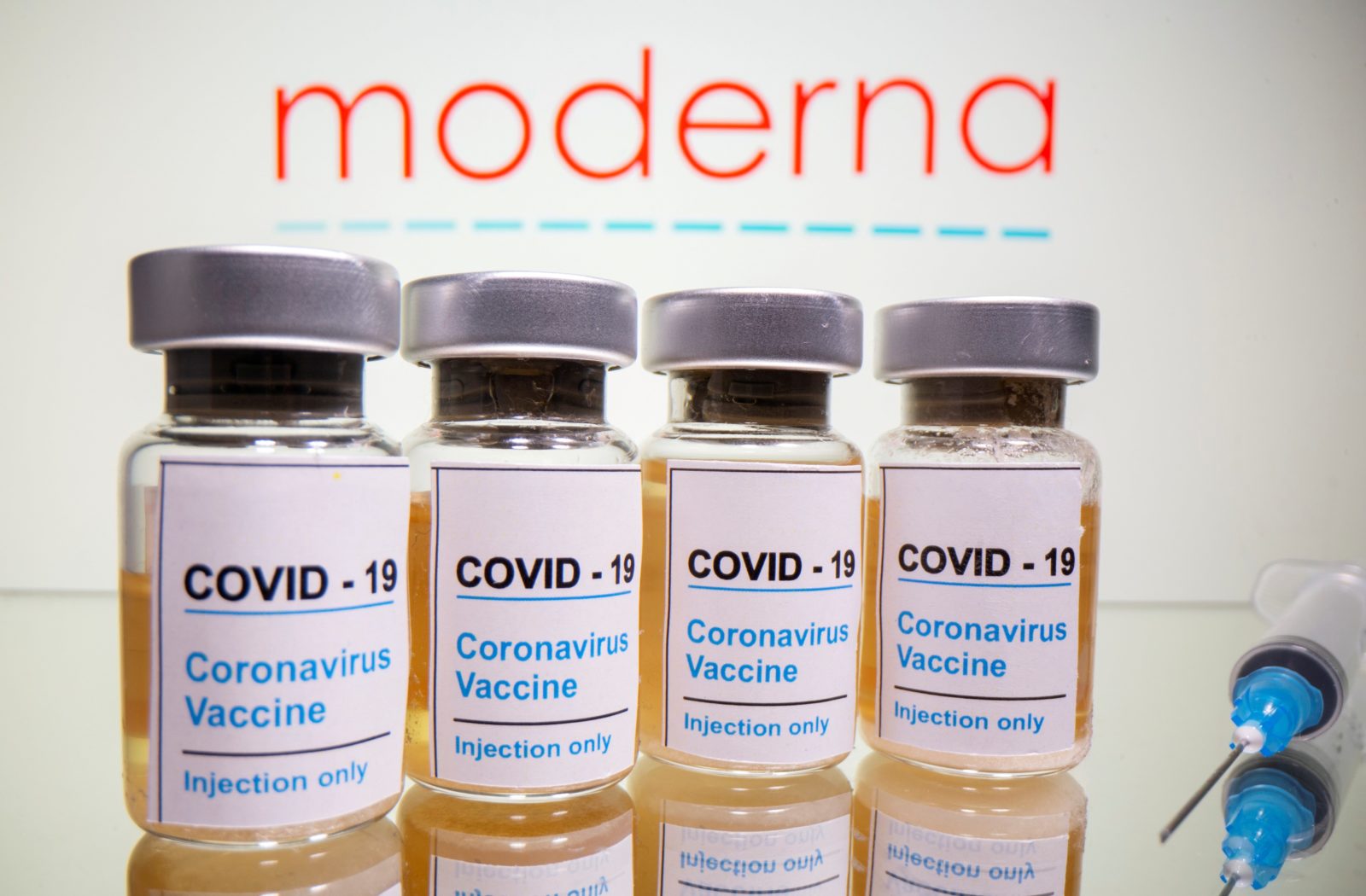 Vials with a sticker reading “COVID-19 vaccine” and a syringe are seen in front of a displayed Moderna logo in this illustration. Photo: Reuters/Dado Ruvic

Tata Group’s healthcare venture is said to have started initial discussions with Moderna Inc for a partnership to launch its COVID-19 vaccine in India, the Economic Times reported on Monday.

Tata Medical & Diagnostics could team up with India’s Council of Scientific and Industrial Research to carry out clinical trials of Moderna’s vaccine candidate in India, the report said, citing officials familiar with the matter.

Moderna did not respond to Reuters request for a comment outside business hours, while Tata Medical & Diagnostics did not immediately respond.

Unlike Pfizer’s vaccine, which must be kept at minus 70 degrees Celsius or below, Moderna’s can be stored at normal fridge temperatures, making it more suited for poorer countries such as India where cold chains are limited.

Data released in November from Moderna’s late-stage study showed it was 94.1% effective with no serious safety concerns. The shot was approved for use in the United States in December and in Europe earlier this month.

India mandates that any vaccine maker must conduct an additional local study if it has to be considered for what the country calls the world’s biggest vaccination programme.

It gave emergency-use approval to a vaccine by Bharat Biotech and state-run Indian Council of Medical Research and another licensed from Oxford University and AstraZeneca that is being produced by the Serum Institute.

India has the world’s second highest COVID-19 caseload after the United States, but daily cases have been declining since hitting a peak in September.

India’s drugs controller has said the overall efficacy of the AstraZeneca vaccine, locally branded COVISHIELD, was 70.42% based on trials done overseas, but the approval for Bharat Biotech’s COVAXIN has faced criticism due to the lack of efficacy data.

The Wire Science@TheWireScience
3 Following 15.6K Followers
In a statement on Friday, the company said, “a technical snag has developed in the cold box at our oxygen plant in… https://t.co/aL2hqrXu2I
7 hours ago
1 1
After its popularity last year, convalescent plasma therapy has been met with increasing scrutiny and skepticism. S… https://t.co/MyYldRlU1G
8 hours ago
1
Discrepancies in causes of death and reporting in India had long been suspected, but first concrete reports from Gu… https://t.co/5duCwdH76d
9 hours ago
3
The Mahadevda Ghat under the Chousa block of Buxar saw a number of bodies floating near the ghat in the river Ganga… https://t.co/J2dakwXHiy
10 hours ago
1 1
Several states have decided to issue global tenders for the procurement of COVID-19 vaccines as the domestic supply… https://t.co/6jd7dm3P5z
11 hours ago
3
National Technical Advisory Group on Immunisation (NTAGI), a government panel, has recommended increasing the gap b… https://t.co/ICkJ1SUx5D
13 hours ago
1
The cow dung cakes were found in a suitcase that was left behind after passengers from an Air India flight cleared… https://t.co/X1CZMZAhV5
1 day ago
1 2
The healing of the ozone layer, and success of the protocol, has been an unfolding, rather than overnight, triumph,… https://t.co/yfdUJgfqaE
1 day ago
1 2
By offering tech tools like application programming interface that can only be used by software programmers, the go… https://t.co/d5bN2XyUJO
1 day ago
1
Net zero can be an important focus for climate action. But it must not become a set of blinkers that seeks to compe… https://t.co/TOVWwHYbyq
1 day ago
1
The situation is particularly bad in rural areas of Uttar Pradesh, India‘s most populous state with a population of… https://t.co/iZpO9mxXwj
1 day ago
4 3
States like Uttar Pradesh, Maharashtra, Karnataka, Andhra Pradesh, Telangana and Delhi have already opted for globa… https://t.co/EZrQJg3CXy
1 day ago
2
In Gujarat, some believers have been going to cow shelters once a week to cover their bodies in cow dung and urine… https://t.co/ICtA9F5sc7
1 day ago
1 3
The country now has 37,10,525 active cases, comprising 15.65% of the total infections. The national COVID-19 recove… https://t.co/Y8M4O8c3Fl
1 day ago
3
Tribal people have been generally found to be reluctant to get themselves vaccinated because of how their communiti… https://t.co/PXjfLlleUe
1 day ago
1 1
Contact us