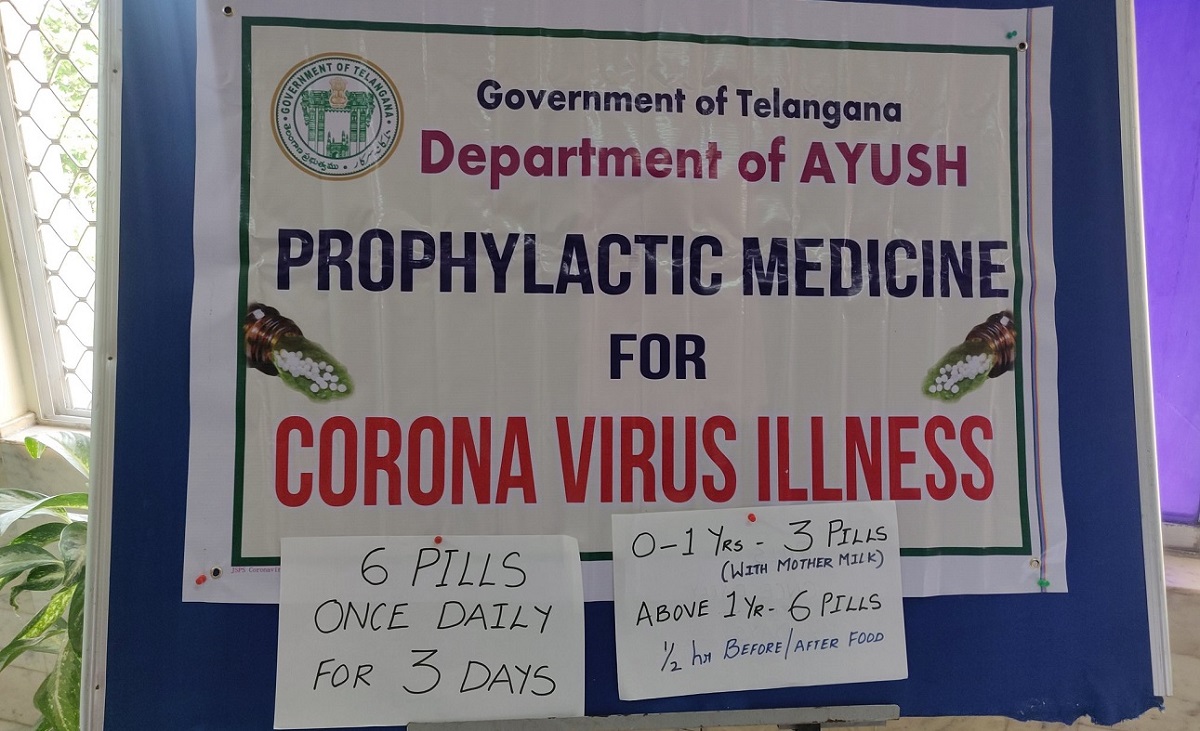 New Delhi: A day after a person from Telangana tested positive for the new coronavirus, SARS-CoV-2, the state government’s AYUSH (Ayurveda, Yoga & Naturopathy, Unani, Siddha, Sowa Rigpa and Homoeopathy) department on Tuesday began distributing what it claims to be prophylactic homeopathic medication.

People line up at MCHRD campus, Jubilee Hills to get #homeopathic preventive medication for #Coronavirus.
The step has been introduced by the Government of #Telangana, Department of #AYUSH#coronavirusindia #COVID #Hyderabad pic.twitter.com/iXy2puXUh9

The drug is being distributed at the MCR Human Resource Development Institute in Hyderabad, with an accompanying poster prescribing “six pills, once daily for three days”.

The Union Ministry of AYUSH had in late January had issued an advisory listing various Ayurvedic, Unani and homeopathic practices as “preventive management steps”, together with commonly accepted practices such as “maintaining personal hygiene”, “staying home when you are sick” and “contacting a nearby hospital immediately” if individuals suspected a viral infection.

The Wire published a report criticising the advisory, with Vasudevan Mukunth writing that the measures suggested may endanger people who find it hard to access quality primary healthcare and that they could develop a false sense of complacency.

The ministry then issued a clarification saying the measures suggested are “neither claimed effective treatment for coronavirus nor suggested any specific drug to combat coronavirus”. It further said:

Two advisories issued on 29th January, 2020 are only indicating general precautionary measures to be followed in the context of such viral diseases. These measures are advised based on the principles of approach in respective medical system [sic] to such viral diseases where respiratory involvement is evident. These advisories neither claimed effective treatment for coronavirus nor suggested any specific drug to combat coronavirus.

However, as The Wire again pointed out, the clarification contradicts the original advisory because the latter had claimed the homeopathic measures to be prophylactic, i.e. preventative.

When a doctor – or, to quote from the advisory, a ‘Central Council for Research in Homoeopathy’, a ‘Scientific Advisory Board’ and a ‘Group of Experts’ – recommends a homoeopathy concoction ‘be taken as prophylactic medicine against coronavirus infections’, the efficacy is implied.

If true: @moayush issued advisories on Jan 29 to indicate “precautionary measures to be followed for such viral diseases” and clarified on Feb 4 they “neither claimed effective treatment nor suggested any specific drug.” https://t.co/zIoFTZlfVc Don’t waste money on homeopathy! https://t.co/iar0bcYEQa pic.twitter.com/8cMbWRRkN6

Meanwhile, the Government of Telangana held a review meeting and decided to set up a 24-hour call centre and also endeavoured to raise awareness on preventive measures. Efforts are also being made to test people who may have come in contact with the person who tested positive.