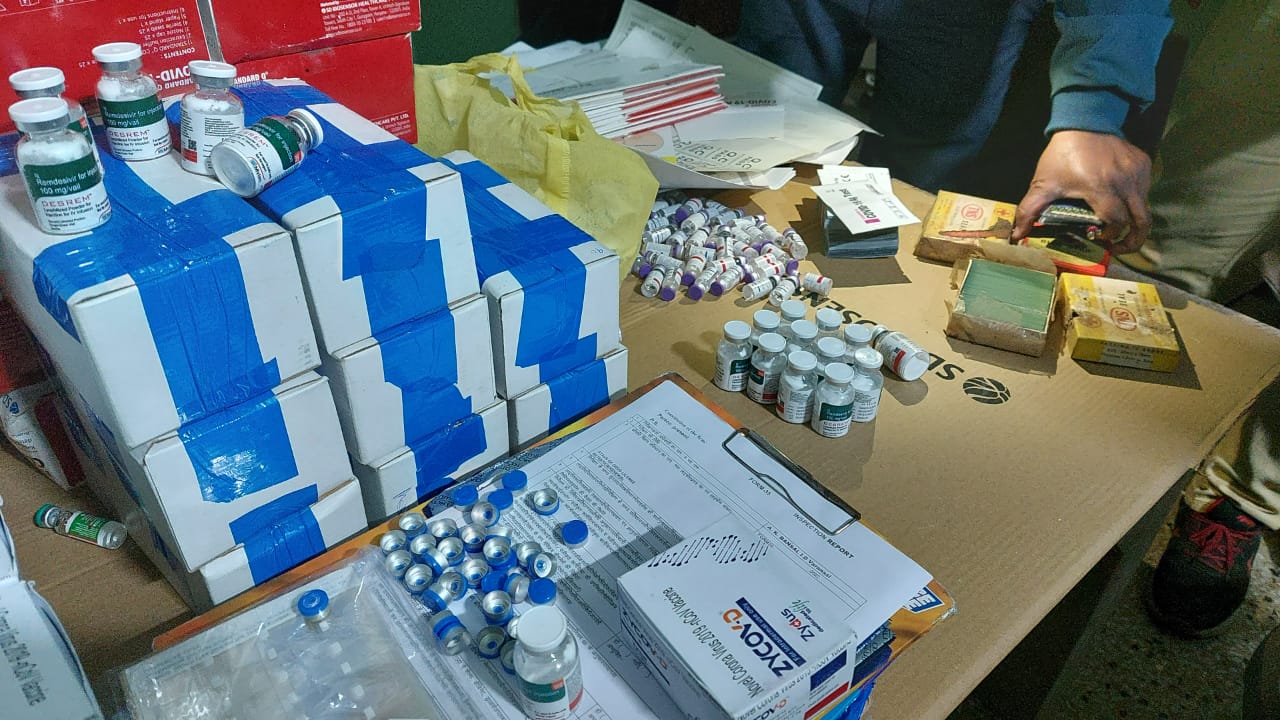 A view of the goods that UP FDA officials seized on their February 2, 2022, raid. Photo: Special arrangement

New Delhi: In a raid conducted on February 2, the Uttar Pradesh Food and Drug Administration (FDA) has secured a large tranche of spurious COVID-19 vaccines, drugs and rapid antigen test kits from Varanasi.

The accused were five individuals in Varanasi and nine in Delhi, working together.

Uttar Pradesh’s assembly elections are set to begin in a week.

According to a note sent by the state FDA to the Drug Controller General of India, and which The Wire Science has seen, the total seizure is worth Rs 4 crore.

“Huge quantity of illegal and spurious Covid-19 vaccine(s), Covid-19 rapid test kits, unlabelled vials of Covishield vaccine, remdesivir injection and other material to carry out the manufacturing, labelling and packaging of the vaccines” has been recovered, according to the communique.

To make these kits, the accused used pregnancy strips. The COVID-19 rapid antigen test kits look similar to pregnancy kits; both are strip-based tests. According to FDA officials, the accused would procure pregnancy kits from the market and simply paste a wrapper of the antigen kit on it. The production cost was Rs 50 per kit but the accused sold it at Rs 500.

Officials also recovered 880 vials (2 ml each) of Zydus Cadila’s COVID-19 vaccine, ZyCoV-D. Note that Zydus Cadila had initiated its supply of this vaccine to the Centre only on February 2, and that the Centre had planned to begin administering it in Bihar. Yet the spurious doses had already been available in Varanasi.

To make the spurious COVID-19 vaccine vials, the accused would fill empty vials with distilled water and slap the company’s (Cadila’s) wrapper on it. Doing this cost Rs 25 but the selling price was Rs 300.

The drug administration team also recovered 6,000 vials “filled with transparent fluid meant for packing as Covishield with green cap”. The accused were allegedly selling the spurious vaccines mostly to private hospitals in the city.

They also recovered 1,550 vials of spurious (injectable) remdesivir vials. According to information shared by the raiding team, the accused would fill water mixed with Glucon-D in an empty vial and paste a fake wrapper around it. The manufacturing cost of one such vial would be Rs 100 – and the selling price, Rs 3,000.

The FDA team was led by K.G. Gupta, assistant commissioner (drugs) of Varanasi, and included two drug inspectors. The team was accompanied by a special task force (STF) of the Uttar Pradesh police. The accused were allegedly operating out of a private residence in the jurisdiction of the city’s Lanka police station.

The spurious items were sold around Uttar Pradesh as well as other parts of the country, according to an STF press release.

Who were the buyers? The STF said three residents of Delhi stood out: that they would buy these products from the five individuals in Varanasi and sell them to six other persons in Delhi. These six would distribute them to various parts of India. The STF said that it had identified all nine individuals in Delhi based on the Varanasi group’s inputs.

The Varanasi group also allegedly procured its packing machines and empty vials from Delhi. For manufacturing, the STF said the individuals had rented a house in Varanasi. To make the fake wrappers, stickers, etc., the group had allegedly employed a graphic designer and used a printer in Varanasi’s Assi area.

In all, according to the STF’s statement, the police and the FDA officials had together seized four sealing machines, two cartons of empty vials, blue and green sealing caps (for ZyCoV-D and Covishield, respectively), and many fake wrappers.

The police have arrested all five members of the Varanasi group and lodged FIRs under various sections of IPC, the Epidemics Diseases Act, the Copyright Act and the Trademarks Act. The STF also said that once their investigation is complete, they will lodge a case under the Drugs and Cosmetics Act 1940.

This isn’t the first instance in which officials have seized spurious COVID-19 products. In August last year, for example, the WHO alerted the Indian government about fake Covishield vials after finding 2-ml vials when Serum Institute of India’s vials were of 5 ml. These faux vials also had falsified batch numbers and expiry dates.

The Wire Science called Drug Controller General of India V.G. Somani on February 3 to understand if his office was following up on the issue. The call went unanswered.