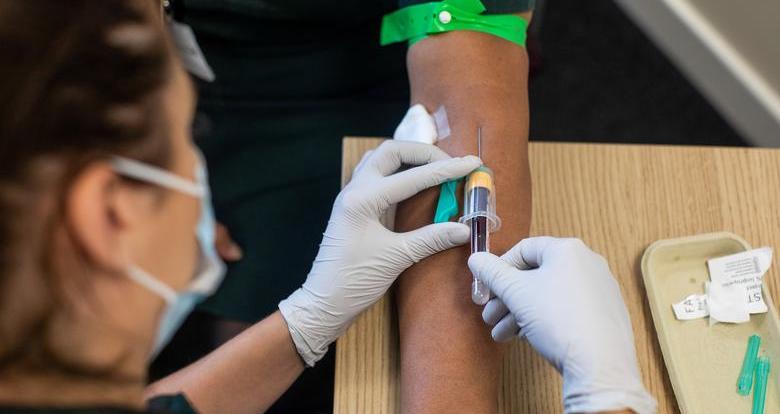 A paramedic takes a blood sample from a medical worker, in Birmingham, June 2020. Photo: Simon Dawson/Pool via Reuters

In early 2020, when we knew less than we do today about COVID-19 and there were few viable therapeutic options against the disease, the option to transfer convalescent plasma became quickly popular – especially since it was also low cost and didn’t portend major supply issues.

Since then, multiple research groups around the world have found that convalescent plasma therapy doesn’t work. However, it still occupies a position in India’s treatment protocols.

In its guidelines (dated April 22, 2021), the Indian Council of Medical Research has included convalescent plasma therapy under treatment methods that have ‘limited evidence’ in support – but may be recommended among patients with “early moderate disease”. Hospitals around the country have also continued to prescribe its use, and it often features in relatives’ desperate pleas on Twitter for help that will save their loved ones.

Recently, 18 public health professionals and physicians wrote an open letter to K. VijayRaghavan, the principal scientific adviser to the Government of India, expressed their concerns over the “irrational and non-scientific use” of blood plasma among COVID-19 patients.

The blood plasma – the liquid part of the blood – of people who have recovered from COVID-19 (i.e. are convalescent) has antibodies against the novel coronavirus. The idea behind the supposed treatment is that transferring this plasma to another person could confer them with the ability to neutralise the virus in their body.

That wasn’t it, however. One February 2021 study, by researchers affiliated with institutions in Australia, Mexico, the Netherlands, Sri Lanka, Switzerland, the UK and the US, even found that persisting with the treatment may help the novel coronavirus mutate differently in the body.

The results were based on examining a 70-year-old man, who had tested positive with RT PCR for COVID-19. In 2012, the patient suffered from a cancer of the immune cells. The chemotherapy had compromised his immune system. A CT scan taken after his test result showed he had pneumonia.

His treatment regimen consisted of a combination of the antiviral drug remdesivir and convalescent plasma. His hospital stay lasted 102 days, and he received convalescent plasma on days 63, 65 and 95. The researchers collected his respiratory samples on 23 occasions in this period and sequenced the genetic material in them to look for mutated strains of the virus.

After two courses of remdesivir, the genetic composition of the viral population was mostly unchanged. But after convalescent plasma therapy, they noticed a large and dynamic shift.

The strain that first infected the patient was the ‘wild variant’ that began circulating around the world early last year. After convalescent plasma transfusion on day 65, a new variant emerged – with a substitution in the S2 protein and a deletion (ΔH69/ΔV70) in the S1 protein, both in the spike gene. The population of this variant peaked on the 82nd day of treatment and declined after that.

When the researchers allowed the viral population that had been isolated from the patient before he received plasma to ‘evolve’, the population’s composition changed in a different way – suggesting that the substitution-deletion variant could have been associated with the plasma transfusion.

The patient was subsequently administered another course of remdesivir and another plasma transfusion on days 93 and 95, respectively. After the transfusion, the same substitution-deletion variant emerged once again and dominated the viral population.

Ultimately, the patient suffered from pronounced inflammation, multi-organ failure and died on day 102. (Note that the international study didn’t attribute the evolution of the substitution-deletion variant to the failure to treat the patient.)

The study effectively found that transfusing convalescent plasma could have altered the viral population in the patient’s body.

Syed Muzaffar Jan, a molecular virologist studying immune-escape mechanisms at New York’s Icahn School of Medicine, wrote for The Wire Science on May 2:

“The antibodies that viruses encounter during an infection impose a tremendous selection pressure on the virus, forcing them to adapt or die. In response, viruses may mutate to such an extent that they present themselves in a new form that the antibodies don’t recognise.”

If the plasma did exert a ‘mutation pressure’ on the viruses, the nature of this pressure could encourage the viruses to mutate in a way that they eventually acquire a survival advantage and learn to adapt to their hosts better.

Although the study offers only preliminary evidence based on the responses of a single patient, it breaches the possibility of a new unknown in the use of convalescent plasma. We need to know more, and more studies will get us there. But until we do, we can no longer assume that the technique is harmless. The uncertainty sword can cut both ways.

In their paper, the study researchers recommend the use of convalescent plasma only as part of observational studies – not as therapy – and recommend that doctors exercise more caution when considering the option for patients with suppressed immune systems.

In another study, described in a preprint paper uploaded in December 2020, researchers from Italy, the UK and the US worked with convalescent plasma from 20 donors and monoclonal antibodies – antibodies that have an affinity to only one part of the antigen – in laboratory conditions.

For answers, they selected the plasma with the better-binding antibodies, diluted it and incubated again with a higher viral load of SARS-CoV-2, and checked the bindings again. Again, there were differences between the plasma samples.

The researchers continued this way for 45 days, serially diluting the plasma that bound better.

After the 45th day, the researchers performed molecular analyses and found the presence of a mutation in the spike protein in 36% of the viral population. This mutation had forced the plasma to become less effective on the 45th day. And as time passed, 100% of the viral population carried this mutation. Then, after 80 days, the researchers observed a second mutation in the spike protein, rendering the plasma even weaker against the viruses that had it.

There was a third and final change: a new variant was born, designated PT-188 EM. Antibodies in the plasma couldn’t neutralise it at all.

So under constant pressure, even convalescent plasma that has a high neutralising capacity to begin with could trigger mutations in the viral population. In addition, only three mutations proved sufficient to destroy the plasma’s ability to neutralise the strains. (Note, however, that just the number of mutations and/or their locations on the genome don’t straightforwardly dictate predictable changes in the virus.)

The researchers also found that PT-188 EM diminished the neutralising activity of all 20 plasma samples. But perhaps fortunately, not all the samples were affected equally. Natural antibodies could still target many parts of the antigen and neutralise PT-188 EM to varying degrees.

When we take all these findings together, it’s clear that our faith in convalescent plasma therapy was premature, and possibly ill-informed too. It’s no longer that ‘plasma therapy is ineffective but harmless’; we need to be sure, before we can demand this option from healthcare providers or other people, that it is really harmless. Until then, the benefits won’t outweigh the risks, and both governments and healthcare workers need to exercise more caution before recommending its use.