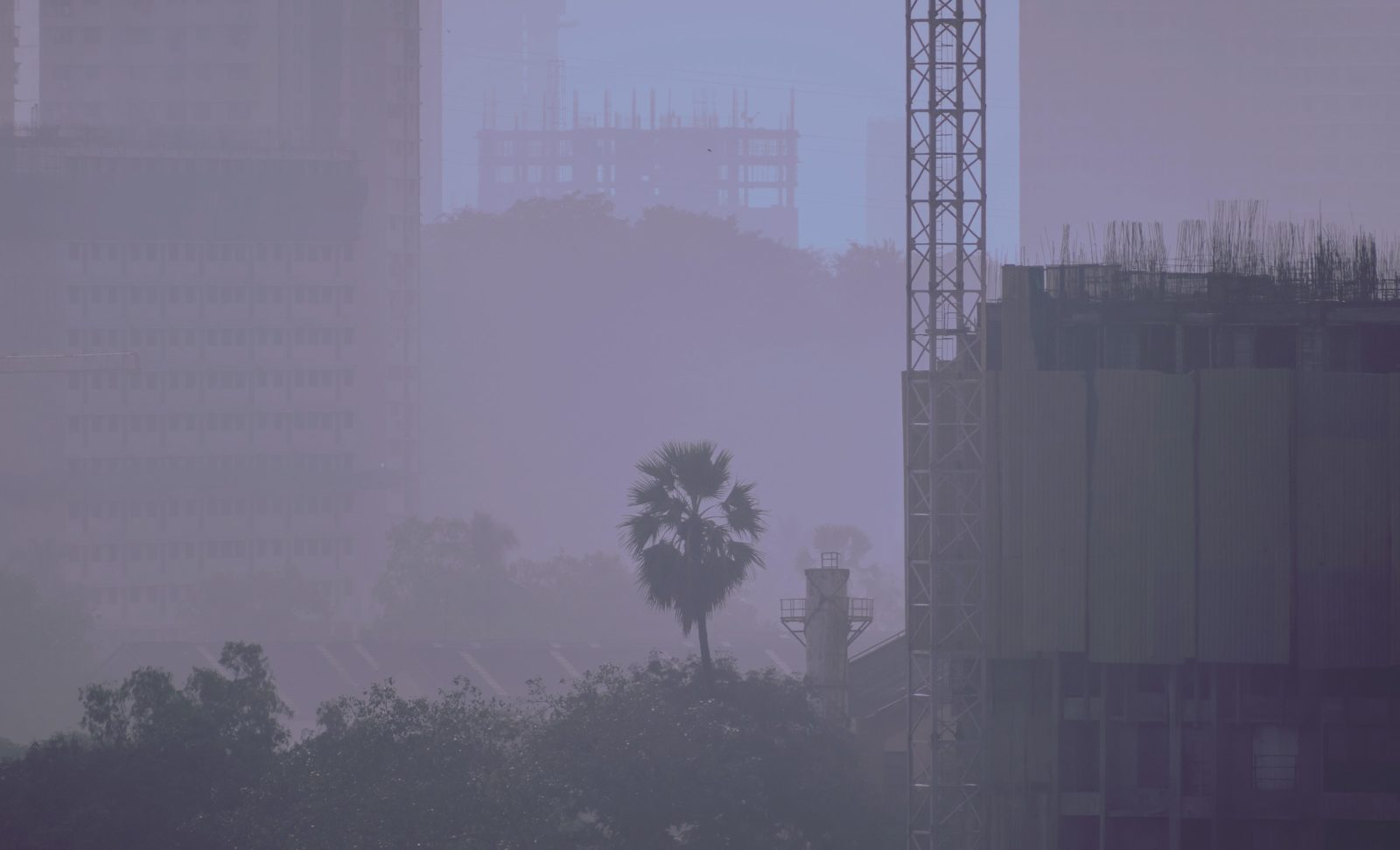 The following is a short excerpt from Breathing Here Is Injurious To Your Health, by Jyoti Pande Lavakare, published by Hachette India in November 2020.

For me, January used to be the month that held in its crisp chill the hope of a new year, the pageantry of Republic Day, my birthday. Now it also holds the date my mother breathed her last breath. The one-year anniversary, her barsi, of her passing away is coming up and I’m not sure I’m ready to face it. At least not in the grey dystopia of Delhi.

But first, I must attend a meeting on environmental issues that Shashi Tharoor has called on 3 January in the national capital. The Indian National Congress party, to which he belongs, has recently won state elections in Rajasthan, Madhya Pradesh and Chhattisgarh, which has made the political party hopeful about more wins. It wants to begin by creating a more inclusive manifesto. For many of us in various air pollution and environmental groups, this is a chance to embed clean air, water, forests and sustainable agendas in political manifestos. CFA1 has always been very clear that clean air needs to be a non-partisan issue across all political parties. Barun has measured PM2.5 levels of 617 outdoors and 460 indoors in Kolkata over this past Christmas, and Abhishek has measured 385 in Bikaner around the same time even as other pollution-aware people from cities like Varanasi, Nagpur and Chennai are sharing their PM2.5 numbers – all disturbingly high.

On the day, there are almost 40 people from different organisations who assemble at the office space tucked inside the newly restored, beautiful Sunder Nursery gardens, several of whom I recognise, including the intelligent and amiable Ashutosh Dikshit who heads the United Residents’ Joint Action (URJA). URJA networks 2,500 RWAs2, trader associations, religious bodies and non-profits to help deliver last-mile governance. Ashutosh, who has also founded a research and advocacy group called The Citizens Alliance, understands air pollution thoroughly and is excellent at working collaboratively.

Dr Tharoor seems genuinely interested in the points that we raise, and more knowledgeable than I expected. And although it is pitch-dark by the time I leave and I can smell the smoky air even inside this green oasis, I feel hopeful. Romi Kapil Dev, an active RWA member gives me a ride back, and we discuss ways of mobilising our neighbours to segregate garbage as a community. This year we have decided to focus on outreach and building communities, going beyond Delhi.

As part of our outreach, we meet the University of Chicago’s EPIC team on 24 January – EPIC-India’s executive director Dr Kenneth Lee and I have been in touch since November – and we agree to host their AQLI tool on the CFA home page. We decide to co-create awareness modules. At our board meeting the next day, we discuss whether we should increase our outreach, start fundraising, set up a secretariat, take the organisation to the next level or play a more advisory role until we collect some money to scale our initiatives.

Meanwhile, an alumnus from IIT Kanpur has written to CFA, inviting Anita and me to speak at a conference on 10 January. The conference is titled ‘Care for Air’ and organised by the Social Entrepreneurs and Enterprises, an initiative by the alumni group. I am unable to go to Kanpur but fortunately, Anita can make it and will speak about measurable, timebound, real outcomes around solutions to pollution.

Over several phone calls, Jatin Vasandani, one of the organizers of the conference in the verdant IIT Kanpur campus, and I discuss its purpose and the other speakers. I’m curious about his unusual decision to pick air pollution as the theme for an alumni meet and ask him why.

“Well, because IIT-K has been on the forefront of air quality and climate research with an interdisciplinary Centre for Environmental Science and Engineering. Because the AQI was developed by an IIT-K team. Because the pollutants causing discolouration of the Taj Mahal were discovered by another IIT-K team. Because the latest work on quick cause apportionment was led by one of IIT-K’s atmospheric scientists. Because a national aerosol facility is coming up in IIT-K, the first in India and among Asian universities,” he rattles off .

“But mainly,” he pauses, “it is because Kanpur is the most polluted city in the world, and we want to change that.” He, along with the rest of the alumni, have managed to gather an impressive line-up. The speakers include atmospheric scientists such as Dr Sachchida Nand Tripathi, Dr Sagnik Dey and Dr Sumit Sharma. They have also managed to get officials of the Uttar Pradesh State Pollution Control Board and senior bureaucrats from the state and central Environment Ministry as well as Ronak Sutaria, an urban scientist who works with low-cost pollution monitors. It is networks of low-cost sensors such as his that have democratised pollution and made it visible to laypeople.

Jatin is struggling with the last-minute cancellation of one of the stars of the show, Ritesh Kumar Singh from the environment ministry. Mr Singh is an articulate joint secretary whose knowledge I’ve found impressive. He is one of the key officials coordinating an all-India comprehensive clean air plan. The NCAP3 was first conceived and shared with state government stakeholders in March 2018 and comments on it from the public invited by May 2018. Some of us had found the initial draft weak, with no measurable goals, no timelines or legal mandates embedded in it. Based on feedback from different stakeholders over several consultations and meetings across states, the government had amended and redrafted it, and on 19 October, had passed the final draft unanimously, but still hadn’t notified it.

Activists have been waiting impatiently for an announcement. There are rumours that the central government plans to launch it on 10 January, and that Mr Singh’s presence is needed in Delhi for that. In the end, Jatin manages to get Mr Singh to address the Kanpur gathering via Skype. A couple of hours later, the NCAP is publicly released. It is still deeply flawed. In June 2020, the Council on Energy, Environment and Water (CEEW) and Urban Emissions will jointly evaluate the NCAP as weak, lacking a legal mandate, transboundary coordination, funding, clear, measurable targets and accountability – but at least we finally have a clean air policy and an acknowledgement of this gigantic problem.

“What his address made me – all of us – realise, was the extent of coordination between multiple governmental agencies that was required and the sheer enormity and complexity of this issue,” Jatin tells me later.

In planning and policy, a ‘wicked’ problem is one that is tough or impossible to solve because of incomplete, contradictory and changing requirements that are often difficult to recognise. Wicked problems have innumerable causes, are tough to describe and have no clear solution. Air pollution is thus best described as a wicked problem. Which means it is going to be critical to collaborate with others in this area. The Clean Air Collective is growing exponentially, which is great. Our focus now turns to ensuring that it doesn’t become another echo chamber of experts talking to each other.

Jyoti Pande Lavakare is the president of clean air non-profit Care For Air.

The Wire Science@TheWireScience
4 Following 27.3K Followers
If La Niña conditions persist, India should expect a range of changes in its weather, climate and seasons. From pro… https://t.co/oSlA5h6ru9
15 hours ago
2
Physicians seem less charitable towards women who did not know their place in the birthing room. ibn al-Ḥasan is no… https://t.co/PnxAUoHPWQ
16 hours ago
The verdict is a reminder – and vindication for those who have been demanding it in lower courts – that states aren… https://t.co/o5e2WPlDhg
17 hours ago
As entrepreneur Saul Griffith put it: “Imagining we can build machines that work 20-times better than all of biolog… https://t.co/ryvIykzlsr
17 hours ago
2
In a recent judgement, the Supreme Court directed states to set up eco-sensitive zones at least 1 km wide around al… https://t.co/VvKVEd4ExK
1 day ago
1 1
In many regions across the medieval Islamic world, male physicians decided what medicine (ṭibb) was and who practic… https://t.co/zaun0xG9lD
2 days ago
1 4
The World Meteorological Organisation believes there is a strong possibility that the ongoing La Niña event could e… https://t.co/vVbNdHBiDn
2 days ago
1 1
R. Madhavan's directorial debut, 'Rocketry', based on the life of ISRO scientist Nambi Narayanan, is an illustratio… https://t.co/Rv8bZ1847v
2 days ago
10 45
Maneka Gandhi recently encouraged religious leaders to protest the serving of eggs to school children with a bizarr… https://t.co/gTRViFyGyY
2 days ago
3 3
The expanding human presence at IIT Madras, which was carved out of the Guindy forest, has accompanied an increase… https://t.co/K7L5rCet4B
3 days ago
Laws in India regarding abortion are fairly liberal – but the challenges stand tallest in the face of ensuring wome… https://t.co/9Z21itTRpY
3 days ago
7 15
Dogs on the campus of IIT Madras, while not predators per se, are killers, with a population supported by anthropog… https://t.co/sicBj0IXlS
3 days ago
1
With India banning single-use plastics from July 1, 2022, @aathiperinchery speaks to legal policy expert Dharmesh S… https://t.co/sDAgZb5mQH
3 days ago
8 19
Working 36-hour shifts without sleep or food is considered a rite of passage for young doctors, who barely have any… https://t.co/pMAWtBLMJY
4 days ago
Medical students are not equipped to deal with the consequences of discrimination faced by women, tribal people and… https://t.co/BFCh54biiW
4 days ago
4 4
Contact us