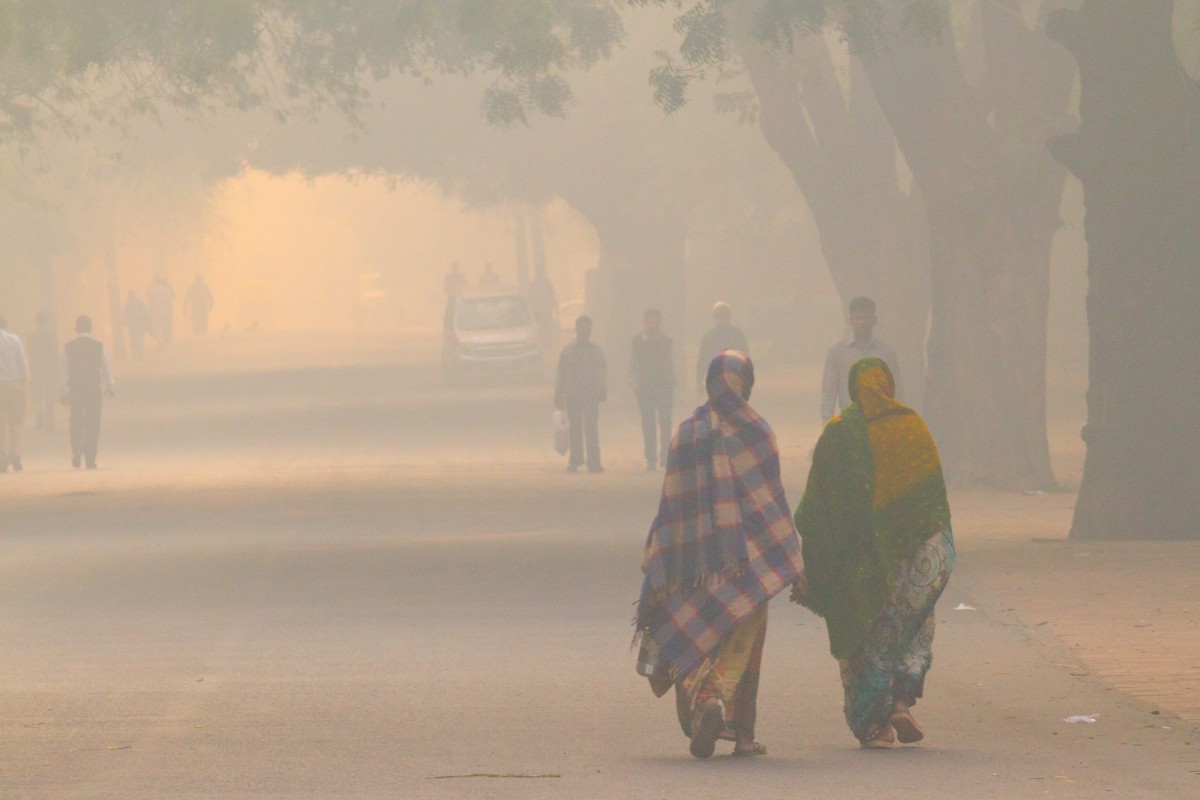 This article follows Ritwick Dutta’s two-part analysis of the EPCA’s performance. Read the first and second parts here and here.

On November 25, 2019, a bench of the Supreme Court comprising Justices Arun Mishra and Deepak Gupta directed the Government of India to install ‘smog towers’ (essentially giant air purifiers) to control particulate matter levels in Delhi’s air.  This was after the court had summoned the chief secretaries of Punjab, Delhi, Uttar Pradesh and Rajasthan over their failure to control air pollution.

Earlier, the Environmental Pollution Prevention and Control Authority (EPCA) had submitted a report on November 18 to the Supreme Court entitled ‘Special Report on Pollution hot Spots in NCR with request for urgent directions to improve enforcement and pollution control’.  It makes a startling revelation:

Delhi has been able to bend the pollution curve with improvement in annual air pollution load on the city from 2010 to now.

However, the report provides no figures that explain how the city’s pollution load decreased from 2010 to 2019. Thus, according to EPCA’s report, the air quality has actually improved in Delhi from 2010 to 2019.

But if pollution levels have actually gone down, why is there such frenzy over the increase in air pollution in Delhi? Why did the court direct the government to install an expensive technology like smog towers, which offers no solution to the problem of air pollution generation. It’s imperative now to take a closer look at the EPCA’s report.

There are two parts: the first deals with ‘action taken this decade (2010-2019) to combat air pollution in Delhi’; the second part addresses pollution hotspots.

Apropos the first part: it’s important to highlight that the  ‘action taken’ refers only to action with respect to Delhi to combat air pollution, not to the National Capital Region (NCR) – which includes districts in Rajasthan, Uttar Pradesh and Haryana. This Delhi-centric approach is evident when one considers the action taken against power plants. The EPCA report mentions the action as “progressively shutting down power plant in the city and moving to natural gas” (sic) but doesn’t mention the fact that a new 1,320-MW coal-fired power plant has been approved in Khurja, Uttar Pradesh, located within the NCR and which will add to the NCR’s pollution load.

The report also claims that “diesel car sales have dropped”, attributing this claim to “the Environmental Pollution Charges on big diesel (more than 2,000 cc) which has contributed towards disincentivising personal diesel cars.” It’s difficult to assume that environmental compensation charged at the rate of 1% of ex-showroom price of big diesel cars could have been the sole reason if only because it’s difficult to believe that an increase of price by Rs 20,000 for an SUV priced at Rs 20 lakh could have been a disincentive. The report also doesn’t mention the fact that the entire automobile sector is facing a slowdown, whether of petrol or diesel vehicles.

The other cause for concern has to do with burning municipal solid waste. The EPCA report states “there are 2,300 waste dumps – neighbourhood structures to collect and store waste. Over 80% of the waste is processed through incineration.” Incineration is nothing but the controlled burning of waste, and it’s in violation of the Solid Waste Management Rules of 2016, which emphasise composting, biomethanation and vermicompositing. It’s impossible to presume 80% of the solid waste generated in Delhi is combustible waste. In fact, it’s the other way round: the bulk of the waste is compostable.

But in spite of the serious air pollution crisis, the EPCA has recommended the establishment of highly polluting waste-to-energy plants in Hapur and Meerut Nagar Nigam. It’s also pertinent to that the EPCA report mentions that between October 2018 and October 2019, roughly 80,000 tonnes of plastic and rubber were sent to waste to energy plant for incineration. When everyone seems to be talking about farmers burning stubble, there’s hardly any discussion on the environmental consequence of burning waste – especially since even under controlled conditions, incinerating waste is very polluting.

The report’s second part deals with ‘pollution hotspots’, and makes for interesting reading. The entire report is based on visits undertaken by EPCA chairperson Bhure Lal, no one else. This is surprising given the fact that the EPCA has representatives from leading environmental groups and institutions, including the Centre for Energy, Environment and Water (CEEW), the Centre for Policy Research (CPR), IIT Delhi, TERI, the Shakti Sustainable Energy Foundation and the Centre for Science and Environment (CSE).

The choice of hotspots is also interesting: of 18 hotspots, only one in Uttar Pradesh received a visit. Given the large number of industrial centres in Uttar Pradesh in the NCR region, why was only this one chosen?

Also read: Do You Pollute the Air? Expect a Friendly Letter From the Authorities.

With respect to Bawana, Mundka and Tikri areas in Delhi, the report states that Lal “found that massive amounts of rubber and industrial waste … were being burnt in the open, leading to pollution”. It continues later that Lal “first worked with the DPCC1 to issue necessary direction for closure, penalty as to ensure that the industries would ensure compliance and no waste would be burnt”. However, the next paragraph says, “Chairman EPCA then worked to find resolution of the problem through convening meetings with the industries”.

India’s environmental laws are clear: the violator has to be fined or jailed for contravening provisions of law. There is no scope for “convening meetings” or for the EPCA to serve as a mediation centre for violators. But this is exactly what the EPCA has been up to.

The report has a separate section on directions to be sought from the Supreme Court, where one line reads, “Massive quantities of plastic, industrial and other waste are found dumped in vacant areas and then burnt.” However, the EPCA has taken no action against violators even as the report states that the apex court “may direct Delhi, Haryana, Uttar Pradesh and Rajasthan to ensure that no waste is burnt in their regions”.

About smoke from industrial units: “EPCA inspection in hotspots has found many instances where there is visible black smoke from industry. There are standards for PM, NOx and SOx, and industry is required to be compliant with the standard and to ensure that there is no pollution.” Again, all that the EPCA recommends to the Supreme Court is that it “may direct Delhi, Haryana, Rajasthan, and UP pollution control boards to rigorously monitor the emissions, especially at night and take stringent action against any industry found noncompliant/with chimneys with visible smoke”. Lal also found that a waste management system installed in Sabji Mandi, Sahibabad, had gone kaput but all he did was advise the government to take remedial measures.

The EPCA report is a testimony to helplessness and passing the buck. It presents absolutely no efforts to tackle the issue of pollution up front, and is replete with expressions such as “may direct” or “advise” instead of even expressing intent to initiate criminal proceedings. As it stands, the EPCA is not an advisory but an authority under section 5 the Environment (Protection) Act 1986, invested with all the powers to issue directions, file complaints before the magistrate, and enter and search premises.

As such, the EPCA represents an experiment where the government – in 1998 – took the power to enforce environmental law away from pollution control boards and the environment ministry, and gave it to an authority. The EPCA effectively has all the powers of the government minus the constraints and bureaucracy, designed specifically to tackle air pollution in the NCR. But that the NCR region today has four of the most polluted cities in the list of top 15 is prompt enough to suggest the experiment has failed.

In 1952, London was enveloped in smog for five days. The city coughed to a standstill, thousands died and many others were sick. The government reacted by passing the UK Clean Air Act in 1956, which forced a complete transition from coal to clean energy, among other things. As a result, the Great Smog never returned to London. But in the NCR, the EPCA wants the people to believe that despite all of Delhi being covered in smog, our air quality has in fact improved in the last 10 years. The Union health minister wants the people to eat carrots and the Union environment minister wants people to listen to music, both to cope with the pollution.

We must recognise that the biggest crisis facing the capital city and its neighbouring areas is not air pollution; it’s the collective ignorance, institutional failure, a culture of denial, inaction and a bloated confidence in technology. Unless we’re able to overcome them, any number of directions from any number of courts won’t make any difference, the smog will simply linger and languish.