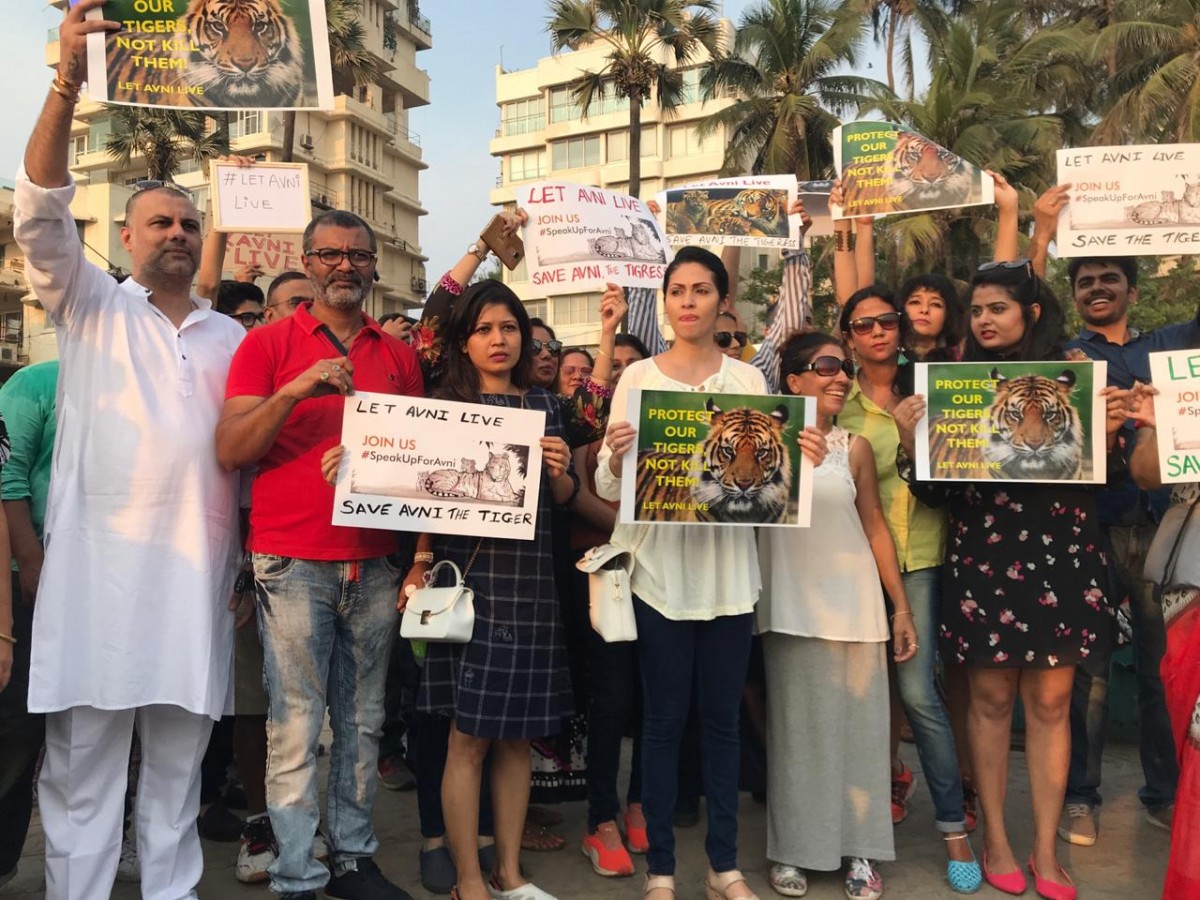 This article was originally published on October 11, 2018, and was republished on November 3, 2018, in light of Avni’s killing.

Activists are fighting to save a six-year-old tigress named Avni, who the Maharashtra government has ordered to “shoot at sight”. A legal battle failed last month when the Supreme Court of India refused to stay an order issued by the state forest department to ensure no more “human-wildlife” conflicts would happen in the Pandharkawada forest in the Yavatmal district of Maharashtra.

Avni, or T1 as she is identified, is alleged to have killed 13 villagers who had transgressed into the forest boundary over the last two years. Many experts claim there is no conclusive evidence to say that it was Avni who killed the villagers and wildlife enthusiasts and forest rights activists have been campaigning to reverse the order to terminate her. Several people, including actors and politicians, have come forward in support of Avni. Several citizen groups have also protested across Maharashtra.

Jerryl Banait and Sarita Subramaniam, of the Earth Brigade Foundation, had moved the apex court against the Nagpur bench of the Bombay High Court to shoot Avni at sight in the forest. The apex court refused to intervene, giving the state a free hand to hire a private hunter to execute the court order. “The state, instead of engaging veterinaries, decided to engage a hunter named Nawab Shafat Ali Khan to get rid of Avni,” Subramaniam told The Wire.

Avni is the mother of two 10-month-old cubs and has been living in the territorial forest of Pandharkawada with her mate. After the last three deaths occurred in the month of August, the forest department intensified its operations to first tranquilise her and, if that failed, to kill her. Although the order asks the state to first tranquilise and in case it is difficult to capture, then to take the extreme step of killing her, Subramaniam says the state has made its intent very clear by engaging a hunter. “The person engaged is not an expert. There is no attempt made to find ways to capture her. The state has directly got a man who has a reputation as a hunter and animal killer,” Subramaniam alleged.

Sunil Limaye, Additional Principal Chief Conservator of Forest (wildlife), says that over 300 employees of the forest department, over a dozen doctors and several experts from other states are working with the private hunter. “The efforts are only made towards catching her [Avni] alive. The presence of the hunter is only to ensure no more lives are lost and if the tigress were to attack violently, we are able to save our men who are out on the field.”

Media reports indicate that the first killing took place in mid-2016. Since then, around 13 persons have been killed in the forest. Some activists have said that the killings did not happen due to the tigress entering into human settlements but the other way around. According to the National Tiger Conservation Authority’s guidelines, a tiger can be known as a “man- eating tiger” only if leaves its own habitat and comes into human territory, lurks to find humans as if they are its own prey, and habitually feeds on their flesh. Going by the pattern of the killings and Avni’s behaviour, it appears she cannot be classified as a “man-eater”, something the state has been trying to claim.

Limaye says the term “man-eater” is a misnomer. “But the Standard Operating Procedure (SOP) followed by the central agency has laid down a few points. These points focus on the number of incidents where the animal might have been involved in attacking humans, and the instances when she had transgressed beyond the forest limits,” Limaye told The Wire. “Avni’s case sadly falls under this definition and hence was classified as a man-eater.”

Villagers, mostly tribals from the region and migrants who have moved to the villages around the forest reserve in the past decade, are known to be entering the forest to graze their cattle.

“There has been an indiscriminate exploitation of forest resources lately. Villagers cross over to the forest in search of small forest produce. Wild animals which are highly territorial feel threatened,” said Mridul Vaibhav, an independent wildlife conservationist and also one of the persons to have started the online campaign in support of Avni. So far, over 35,000 people have signed the petition and have urged the state to reconsider its decision.

But Limaye says the tribal communities have co-existed forever and cannot be termed as “encroachers” either.  These villagers, Limaye says, are dependent on the forest produce and have been accessing the space for generations. He explained, “Such incidents of wild animals attacking the villagers are rare and there are over 17 villages surrounding the forest. One of our major work is to sensitise the villagers and ask them to follow basic precautions and not venture deep in the forest.”

As the state readies to kill Avni, experts have pointed out some loopholes in the claims made by the forest authorities so far. Seven of the 13 killings had cattle next to the bodies of the human victims, which experts allege could be due to the uncontrolled grazing that has been carried out within the forest boundary. Of the 13 killings, 10 happened on weekends.

Subramaniam asks, “If Avni were a ‘man- eater’ as the state has been trying to portray, what explanation does it have for such a patterned killing?” Also, officials have carried out DNA tests on only five of the 13 bodies, leaving the reasons for death ambiguous in the other deaths. If Avni were to be killed, her two cubs, dependent on her, would also be adversely affected. Limaye agrees: “It would be a challenge to save her cubs. We will have to take special care and ensure they survive.” He says this situation would arise only if Avni dies in the operation. “We are sure we [will] not have to take an extreme step.”

Maharashtra, unlike other states that pay Rs 4 lakh in compensation, pays Rs 8 lakh to the kin of those killed in a tiger attack. “The state has already spent over 60 lakh [rupees] in the past two years paying compensation. It clearly is a costly process for the department to take care of the tigers. The most viable option is to kill them,” Subramaniam said.

The decisions, activists and experts allege, is arbitrary. Subramaniam asks, “It is not that Avni is the only tiger in the area. There are a few more besides her two cubs and the mate. If they end up targeting another tiger, who is to be blamed?” Limaye says over 120 cameras have been fit in the area and the tigers are being monitored 24/7. “We have 50 forest guards moving around, several of them are deployed on machans and are constantly monitoring the area. It is a lot of risk for the forest officials too,” Limaye said.

Apart from allegations of mismanagement and general apathy towards wildlife in the state, activists claim there is an attempt to sell the forest land to industrial and commercial lobbies. In January this year, around 467 hectares of forest reserve land were sold to the Anil Dhirubhai Ambani Group, which proposed to set up a cement plant in the Zari Jamni Tehsil only 50 km from Pandharkawada forest and Mukutban, which has a reported presence of breeding tigers. At least two more such projects have been planned in and around the forest amidst local resistance.

“This area along with the presence of wildlife is also rich in limestone and dolomite reserves,” Subramaniam added. “The state is clearing up this land to private entities and is allowing its exploitation.” However, the forest department rubbished this allegation. “There has been at least 15 to 20 percent increase in the population of tigers. There is sustained work to ensure we have more breeding tigers and the results have been positive,” Limaye claimed.