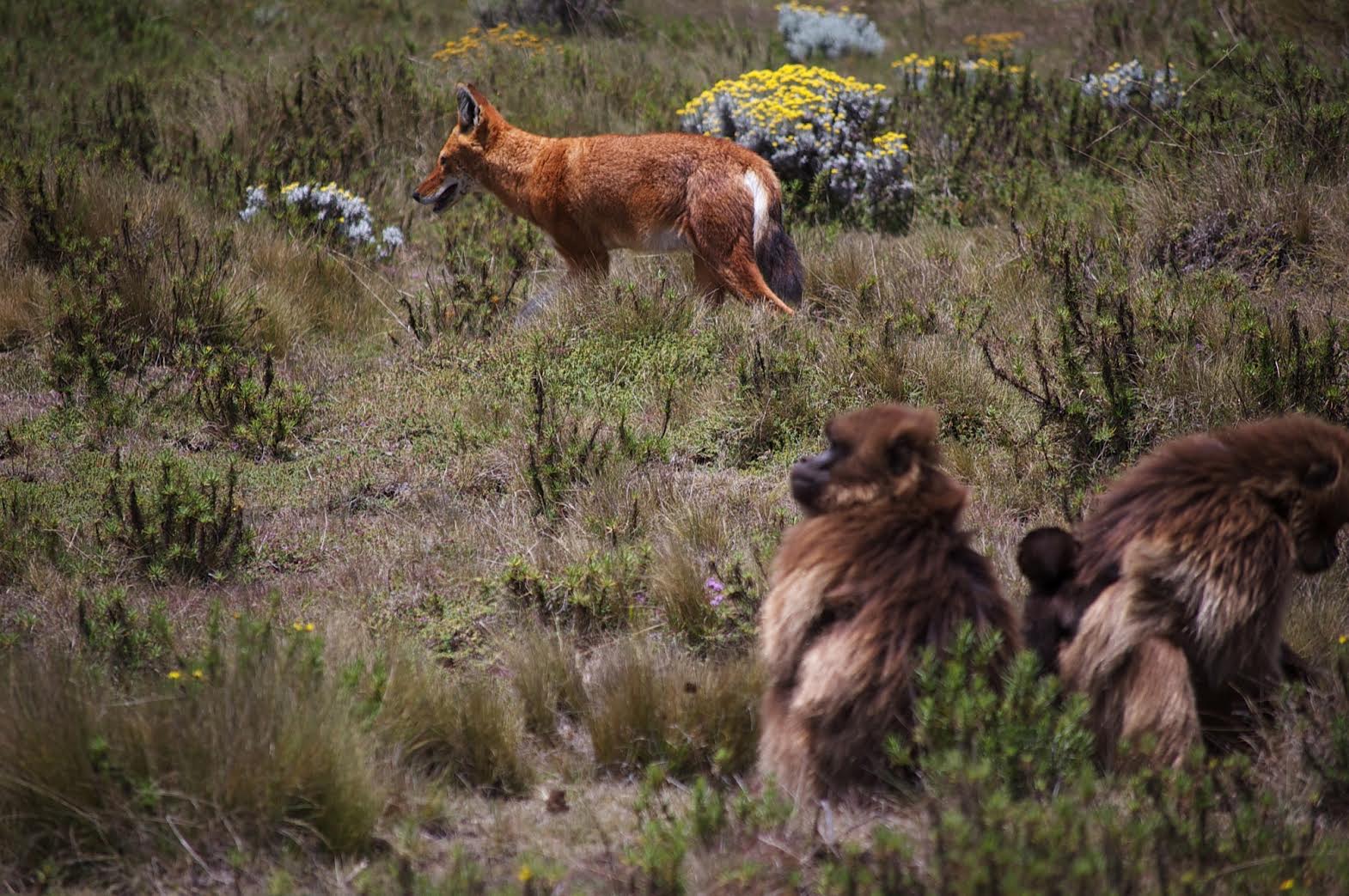 Women in Science – Some Global Perspectives

Large herds of adult gelada baboons dot the high altitude grasslands of Guassa plateau in central Ethiopia. They graze on grass and herbs, and dig up bulbs. During the middle of the day, a lone Ethiopian wolf joins them, wandering between them and staring intently at the ground. An observer would expect the baboons to flee to safety. Instead, they pay no attention even when the reddish-coloured canid drops down into stalk mode. Moments later, ignoring gambolling young baboons nearby, the wolf pounces on a rat. Even then, the geladas don’t flinch.

The Ethiopian wolf, no bigger than a medium-sized dog, is the most endangered canid in the world with less than 450 animals. It’s usually a lone hunter of rodents. Occasionally, two to 13 animals hunt larger prey such as antelope and sheep as a pack. They could take a gelada but they don’t seem interested. An adult gelada male is the same size as an average wolf. Adult baboons, with their impressive canines, are no lambs. Still, it’s folly to let a predator in their midst.

Although resident Ethiopians may have observed this unique behaviour, Vivek Venkataraman from Dartmouth College, and his colleagues from other universities and organisations in the U.S. and Ethiopia were the first to study it.

Wolves and geladas don’t accidentally hang-out together for just a few minutes, but for at least an hour at a time.

I was reminded of a similar event I witnessed at Katagamuwa, adjacent to Yala National Park, Sri Lanka. Large mugger crocodiles swam in tight circles in a shrinking pond. Every now and then, one raised its head above the water to gulp down a big snakehead fish, its belly flashing gold in the early morning sunlight, before it could be snatched by another croc. Splashing muck, anxious smaller ones hurriedly got out of the way of larger crocs.

A dozen painted storks strutted amongst these toothy, armour-plated predators, hunting for fish of a size they could handle. Unlike smaller crocs, the storks didn’t show the slightest nervousness of the large predators. If the foolhardiness of the birds amazed me, I was even more astonished by the crocs. They seemed to have eyes only for fish. I watched them hour after hour for days.

In summer, drying ponds with fish jostling for space and air attract these predators. But Katagamuwa is exceptional for the number of congregated crocs, at least 150 large ones. Just as the crocs ignore the spindly pink legs stepping tantalizingly near their faces, the Ethiopian wolves give up larger prey in favour of tidbits.

Venkataraman and his colleagues explain why they do so in a paper published recently in the Journal of Mammology, called ‘Solitary Ethiopian wolves increase predation success on rodents when among grazing gelada monkey herds.’

For 18 months, the researchers observed geladas’ reactions to wolves and dogs. The baboons allow wolves to approach within 4 metres of them. Venkataraman told The Wire, “Smaller individuals are more likely to move away from a wolf when it gets close. The larger animals don’t care so much.”

However, when domestic dogs from nearby settlements trot up, the monkeys shriek, grab their babies, and flee up cliff slopes. Despite this dramatic precaution, observers watched dog packs kill three monkeys on different occasions. However, researchers saw only one wolf attempt to catch a baby gelada. Dozens of bold monkeys mobbed the wolf until it dropped the baby unscathed.

Obviously, the primates don’t wait until dogs get close before scurrying away. The authors say geladas distinguish wolves from dogs even though they were of similar size and colour from at least 300 metres away. Maybe they do, but I suspect it’s also a matter of numbers. A lone wolf is not as threatening as a pack of dogs. Should a pack of wolves join the geladas, no doubt they’d flee.

Why do wolves prefer to hang-out with geladas?

In the middle of the day, when rodents see a bunch of geladas calmly feeding on grasses and bulbs, they may assume there is no danger and let down their guard. Or perhaps, the authors speculate, geladas disturb rodents while foraging and flush them out. Or maybe rodents can’t hear or see anything else above the noise of geladas crunching and munching. Whatever be the reason, wolves exploit the cover provided by baboons to feast on their favourite prey: rodents. Researchers say that without a primate escort, wolves are less successful.

With much to gain, wolves seem to do their utmost to win the geladas’ trust. Not only do they forgo numerous opportunities of taking a gelada baby or two, they even behave cautiously near the monkeys. They stalk slowly when primates are nearby. If geladas weren’t around, the predators trot in a zigzag fashion across the grassland. They also hunt alone to avoid spooking the primates, say the authors. But wolves don’t need to form packs to bring down small rodents.

What do geladas gain by letting wolves into their midst? Do rodents compete with geladas for the same food? Are geladas using wolves to get rid of rivals?

“Rodents are in a sense a competitor [to geladas],” says Venkataraman, “because they consume similar resources, but this is difficult to test. I think geladas tolerate the wolves because the cost of repelling them constantly is too high. They’re not generally threatening, so they let them be around. As far as we can tell, the geladas derive no benefits from the presence of the wolves.”

If geladas don’t gain anything from wolves, what about the storks who hunt with crocs?

I surmised there was an unspoken treaty among the predators to amiably split the seasonal spoils. Perhaps, storks stir large fish out of the mucky bottom into croc jaws, and in return for the favour, crocs let the birds go unmolested. Since they hunt fish of different sizes, they aren’t competing with each other. Still, ignoring a large stork or gelada meal for little morsels displays self-restraint and an ability to make trade-offs, not qualities one associates with crocs and wolves, the bad boys of so many of our tales.

The losers in these unlikely pacts, however, are small fry: fish and rodents.