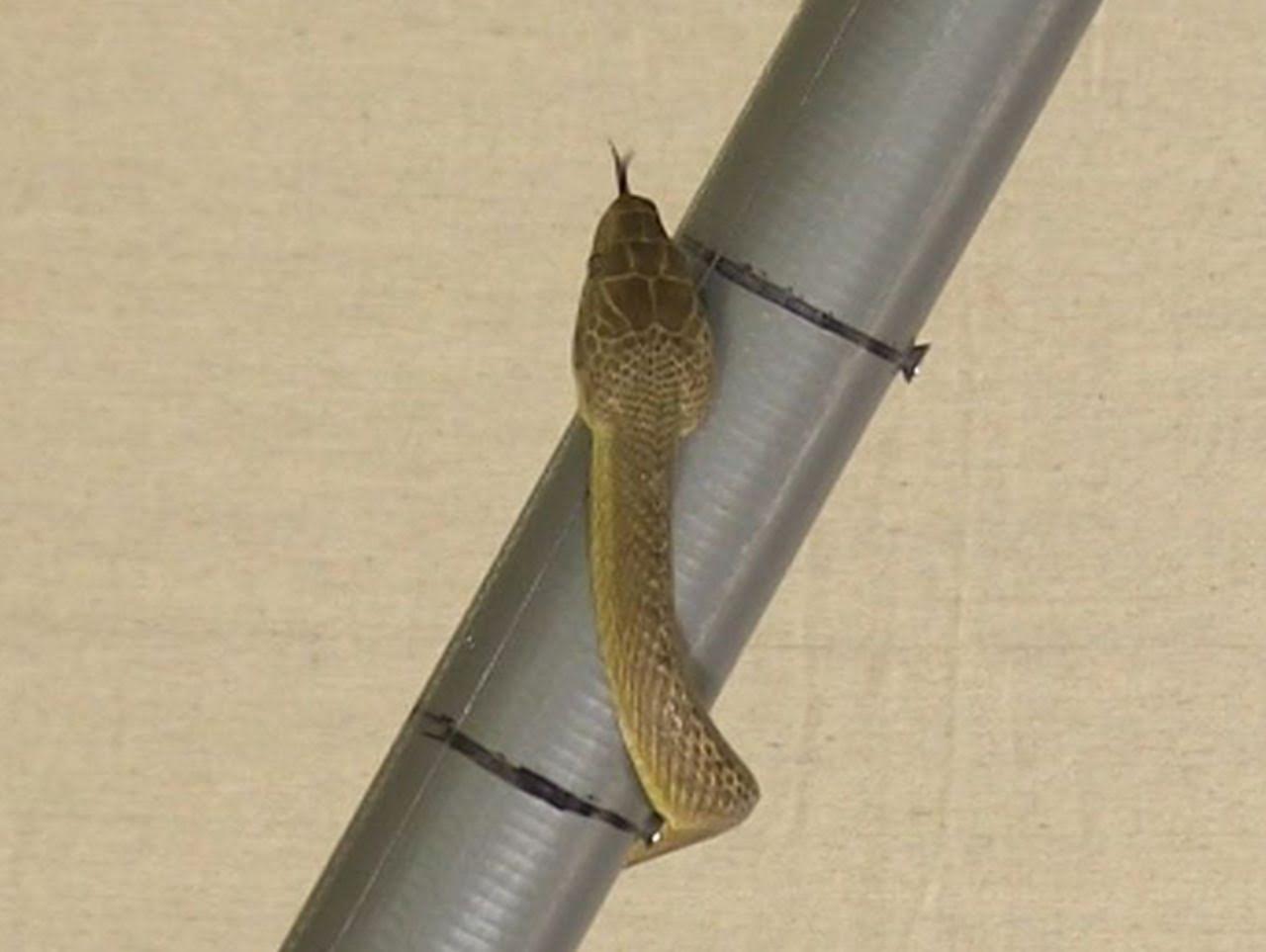 Snakes climb trees without the aid of hands, feet, claws, or sticky toe pads. They also crawl, burrow, swim, and even glide through the air. Whatever they do, their body plan doesn’t alter. Water snakes don’t have fins, flying snakes don’t have wings, nor do burrowing snakes have claws. But they have tweaked their bodies is subtle ways. Specialist tree climbers are slender with long tails that are often prehensile, capable of coiling around branches. Terrestrial crawlers like boa constrictors are on the heavy side with short tails. All sea snakes propel themselves with flat, paddle-like tails.

Snakes climb by bending and flexing the entire length of their tubular bodies. Their glossy bellies may look unsuited for climbing, but they slide over coarse tree bark. Had they been rough, they would cause friction and slow the reptiles’ progress.

Brown tree snakes from the South Pacific are among the elite tree climbers. During the Second World War, they invaded the Pacific island of Guam as stowaways in cargo ships. With no predators to keep them in check, their numbers got out of hand. No part of the island is safe from them. The snakes have already decimated native species of birds and mammals. And they cause power outages by climbing up electric posts and causing short circuits.

What’s the secret of their exceptional climbing skill?

A professor of biomechanics, Bruce Jayne, and his students from the University of Cincinnati, U.S., conducted an experiment. They put stout boa constrictors, medium-weight corn snakes, and the slender, agile brown tree snakes through their paces. Corn snakes are all-rounders, hunting on land and up in the trees. The 37 candidates were the same size, between a metre and metre and half in length.

The researchers simulated different tree trunk textures by driving pegs into smooth cylinders. The pegs were almost flush with the poles or stuck out up to 4 cm. The researchers also changed the degree of cylinder’s incline from horizontal to vertical. They observed how the snakes fared as the gradient increased and pegs decreased in length. In all the researchers conducted about 10,000 trials.

When pegs were tall and inclines shallow, the snakes climbed normally, pushing themselves against the pegs and zig-zagging their way upwards.

The toughest part of the experiment for all the snakes was climbing up a near vertical cylinder with no pegs at all. Then they resorted to a unique kind of locomotion called concertina. They looped tightly around the cylinder two or three times, stretched forward and looped around again, while dragging the lower part of the body upwards. Since this gait requires more effort to keep from slipping, the snakes made slow progress.

As soon as the researchers provided the shortest pegs, 1 mm. long, brown tree snakes glided in their normal sinuous gait. But boa contrictors and corn snakes, however, plodded concertina style until the pegs were long enough to leverage their bodies upwards.

Although boa constrictors were the slowest, they used their muscular strength to grip and climb the pole. The researchers say snakes cope with different structures by modifying their behaviour.

Tree-dwelling snakes would prefer to save energy and resort to concertina style as little as possible. What gives brown tree snakes the ability to climb steep gradients with little support?

The belly scales of tree snakes stretch across the width of the body. In other snakes, like boa constrictors, these scales are shorter and don’t cover the entire belly. These scales overlap each other like tiles arranged on a roof.

Herpetologists have known for a long time that tree-climbing snakes such as bronzeback tree snakes, flying snakes, and some wolf snakes of Asia have a notch on either side of their belly scales. Brown tree snakes have them too. This helps them create a fold where the belly scales meet the small scales covering their backs. This fold, called ventrolateral keel, grasps the slightest irregularity on trees and walls. The overlapping scales act like teeth on a gear, except they are pointed backwards.

“Our most notable finding is how the keel helps to prevent slipping and allows snakes to use a type of crawling that not only is fast but also probably saves energy,” says Jayne. “This becomes more important as the surface steepness increases. For example, the brown tree snakes were able to climb straight up a vertical cylinder by only pushing against pegs that were a mere 1 mm high.”

Mountain climbers use belay devices to break a fall. Snakes’ belay devices are these sharp belly folds. Corn snakes too have a bit of an edge, but it’s not as pronounced as the brown tree snakes’. Without this nifty feature, boa constrictors invest their strength and energy climbing concertina-style up slick poles.

This fold changes the cross-sectional shape of snakes. Most snakes, like boa constrictors, are almost round in cross-section. Corn snakes resemble a loaf of bread – rounded top, while the bottom has corners. In brown tree snakes, the fold projects sharply outwards from the body.

Rotund bodies are not made for climbing as they would roll off the slight protrusions. Even svelte brown tree snakes lose their climbing prowess when their bellies are heavy with food or eggs.

The findings from this experiment raise more questions. “Some snakes such as the gliding snakes in the genus Chrysopelea can form an even sharper ridge along their belly than the brown tree snakes,” Jayne told The Wire. “But we still lack experimental data testing their ability to climb different surfaces with a wide variety of textures.”

Jayne hopes to put the results from this experiment to real world use. He proposes to design a tree snake-proof material that would prevent brown tree snakes from climbing specific trees or poles in Guam. For instance, protecting the guy wires of electric poles would prevent power outages, and wrapping the stuff around trees would shield vulnerable bird nests from predation.

“Brown tree snakes find it tremendously difficult to climb up PVC pipes with diameters greater than about 10 cm if it’s steeper than a 45 degree incline,” says Jayne. “Some older studies by others found that shaving the bark of tree trunks to make it smoother can be very effective for preventing certain species of North American rat snakes from climbing and gaining access to tree trunks. However, we still do not know if such an approach could make a tree trunk smooth enough to prevent brown tree snakes from climbing such a modified natural surface. However, I believe both of these approaches hold great promise and are definitely worth some follow-up research to directly test effectiveness under field conditions.”

In addition, Jayne develops robots using bio-inspired designs in collaboration with engineers. Snake-mimicking robots can climb up inside pipes and tight spaces that would otherwise be tough for humans and robots with wheels to manoeuvre.

Since concertina locomotion is energy expensive, would he use it in robot designs?

“Very often parameters of design other than energetic economy are of primary importance,” replies Jayne. “If one type of movement is economical, it may be useless if it does not allow an animal or a machine to move on a particular surface. For example, all of the snakes in our study used concertina locomotion on the smooth, steep cylinders that lacked any pegs, and friction gripping is very effective strategy for preventing slipping in such circumstances.”

The study was published in the Journal of Experimental Biology on December 17, 2015.