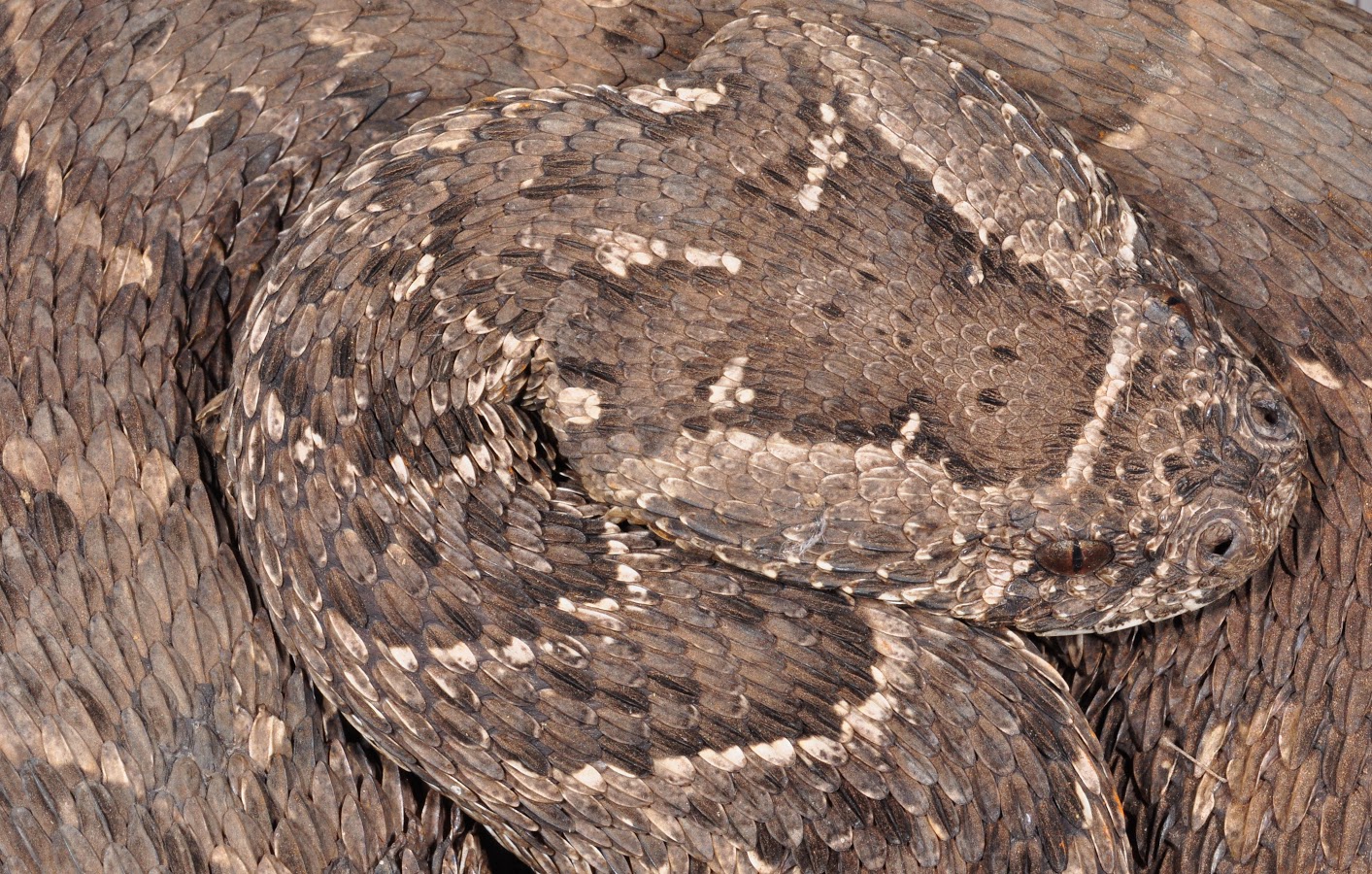 The Ways in Which Delhi’s Pollution Can Kill You

Puff adders lie in ambush for small mammals, birds, and lizards throughout Africa. Despite being venomous, these one-metre-long fat and sluggish snakes are vulnerable to sniffing predators. What should the snakes do to avoid becoming a meal? Not only are they cryptic but they are scentless, say South African researchers.

Other snakes like cobras go from burrow to burrow hunting rodents. Should they spy a wild pig that could gobble them up, they quickly zip away. Cobras use up a lot of energy ranging all over the place. Instead of working hard for a living, puff adders wait in one place for prey to come to them. Their disruptive dark bands and rough brown scales blend well with the surroundings. None of the puff adders’ 42 species of enemies, from cobras to mongooses, warthogs, and raptors, can spot them easily. Their ticket to meals and survival is to freeze in position.

Even though radio transmitters reveal the snakes’ locations, Graham Alexander of the University of Witwatersrand, South Africa recalls, “I regularly found puff adders under my boots when I was tracking them. When you get close to the snake, the signal loses its directionality. I’d often struggle to locate the puff adder, even when I had it down to a square meter or so. I learned to always look at what I was standing on. If I was standing on a puff adder, it would do nothing. Always a little unnerving.”

But what if the snake’s hunters rely on their sense of smell? Visual camouflage won’t be of much use.

Dogs have an incredible sense of smell. They help track criminals, rescue buried people, find bombs and drugs, and even detect diseases in humans. In wildlife studies, they aid biologists in finding scats of specific species, even the poop of killer whales out at sea. Zeroing in on snakes should be a cinch.

Two of our dogs are ace snake finders. Snakes are not smelly like mammals, unless they defecate or musk in distress. Still, our dogs don’t need to see the snake before giving a special low growl that means “Snake, snake.” With their help, we’ve found checkered keelbacks, cobras, and Russell’s vipers in our garden.

Puff adders can give even trained dogs the slip, say Graham Alexander and his colleagues. “There were a few incidents where my telemetered puff adders wandered into the rangers’ properties and took up either a resting or ambush position in flower beds,” says Alexander. “The rangers’ dogs would rush up to greet me and run right over the snake. One of the rangers had a couple of tame banded mongooses. I saw them totally miss a puff adder. Then the logic of the argument became evident: if puff adders freeze when under threat and many of their predators use scent as their main sense, any smelly puff adder wouldn’t last long. That got the wheels turning and the project was born.”

In another project, Alexander’s student, Jonathan Warner, studied the ecology of gaboon vipers, a close relative of puff adders. He tried to use a trained dog to find snakes in which to insert radio transmitters. He says his dog stepped squarely on the head of a basking viper that didn’t move. The dog carried on walking without ever realising he had stepped on the very subject his master wanted him to find. Warner gave up on his dog and found his vipers in other ways.

Shannon McKay, a professional dog trainer, was one of Alexander’s collaborators in the study. She trained four dogs and five meerkats to recognise the smell of different species of snakes. Besides puff adders, the animals were trained to detect five species of snakes that actively pursued their prey.

For the experiment, the researchers left cotton cloths on top of the snakes for 40 minutes. To make sure nothing else could influence the results, they also included cloths scented with vegetation.

Dogs and meerkats had no problem detecting the scent of active snakes. But they failed to perceive the scent of puff adders themselves. The dogs picked up the scent from a freshly shed skin of a puff adder.

Soon after shedding their skins, wild puff adders defecate. Job done, they move away to another site. Perhaps they don’t want to hang around where their stinky droppings and sloughed skins would give them away.

Arboreal snakes, however, have an advantage. They don’t have to worry about stink because their droppings fall to the ground. So they poop anywhere and at any time they feel the urge. Puff adders, however, have to be careful of making a stink.

One other reptile uses smell-camouflage. The African long-tailed seps, a South African lizard, lays its eggs in the nest of a feisty orange-coloured trap-jaw ant. Its eggs and hatchlings smell like the worker ants of that species so the soldiers don’t realise they have intruders in their midst.

Not all ambush hunters have evolved this useful trick of being odourless. Being more than two metres in length, eastern diamondback rattlesnakes have far fewer predators. Under little pressure to evolve new tricks, they have an odour easily picked up by dogs and other sniffing predators.

Despite puff adders’ lack of body odour, Alexander says he loses almost 50% of his subjects every year. Why does that happen when predators can neither see nor smell them?

“They move, they die,” says Alexander. “Puff adders mate in our autumn into winter – from May to June. When males go searching for mates, their mortality goes through the roof. There is a direct relationship between mortality and how much puff adders move on average in a month. Receptive females also have to lay down a scent trail to advertise for males. So they must also move more then, but the effect is not as dramatic in females since they don’t increase their movement as much. You may ask how the females lay a scent trail if they are scentless. They have scent glands in their cloacas that are used specifically for the purpose.”

Based on his fieldwork, Alexander says snouted cobras kill more puff adders than any other predator. “This might explain why puff adders spend about 95 percent of their time on the surface under grass. Cobras can easily follow puff adders down holes, and holes would be focal points for cobras to search. But if you just stay under an arbitrary tuft of grass, you make things more difficult for the cobra.”

Prey animals have to stay one step ahead of their predators. Predators try to narrow the gap and see through their preys’ tricks. In this evolving race of one-upmanship, puff adders have the advantage. One that entails being stepped on by dogs, mongooses, and researchers.