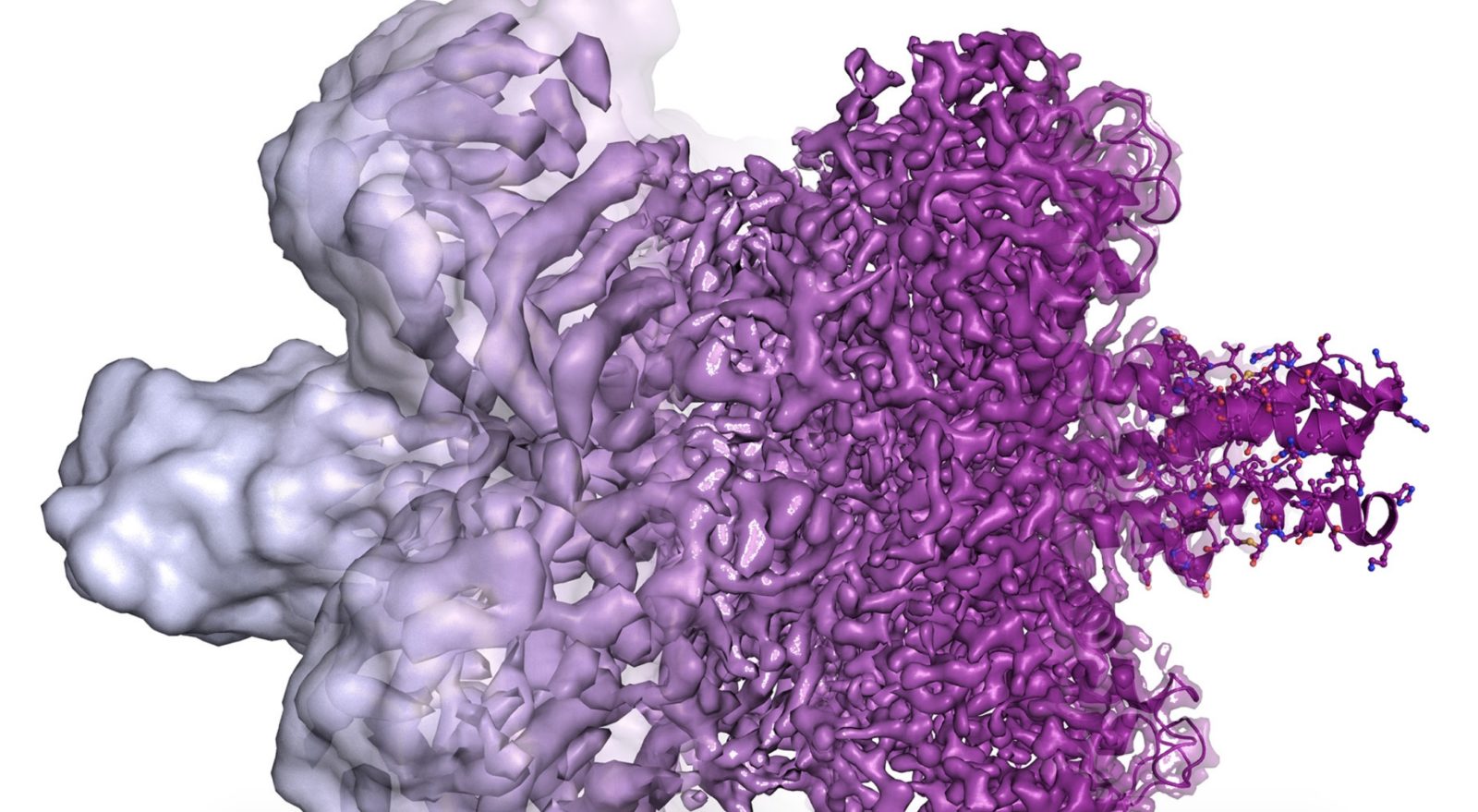 This year’s Nobel Prize for chemistry has been awarded to Jacques Dubochet, Joachim Frank and Richard Henderson for “developing cryo-electron microscopy for the high-resolution structure determination of biomolecules in solution”.

Cryo-electron microscopy is an optimised form of electron microscopy. In our daily lives, our eyes use photons, the particles of light, to ‘see’ objects around us when they reflect those photons. This is because the wavelength of visible light is comparable in length to that of the smallest deformations we need to be able to see. However, objects that are less wide than this distance are not visible to us because the photons won’t be reflected by them. This is also why radio telescopes are so big: their antennae, or receiver dishes, have to have width comparable to the wavelengths of electromagnetic radiation they’re trying to intercept.

Electrons have a lower wavelength when imagined as a wave than do photons, so they can resolve smaller objects. An electron microscope is a machine that ‘sees’ objects using electrons, and then magnifies those images so humans can study them. It was first invented in the 1930s. However, the beam of electrons produced by the machine is bad for biological tissues it is studying.

The beam is produced and applied to the tissue in a vacuum because, otherwise, molecules in the air would scatter the beam. But in a vacuum, all the water in the tissue evaporates, causing the tissue’s biochemical infrastructure to physically collapse, disrupting what scientists are actually trying to ‘see’. Moreover, the beam also damages the tissue and breaks chemical bonds (especially if it’s of a few hundred kilovolts).

This year’s chemistry laureates fixed these issues by finding simple workarounds, restoring the electron microscope as the instrument of choice among structural biologists.

In the early 1980s, Jacques Dubochet found a way to freeze samples so rapidly that they froze at exactly the moment scientists wanted to look at through a microscope. Dubochet achieved this by transferring the sample onto a metallic mesh using something like a water-dropper. There, parts of the sample would form meniscuses across the mesh. Suddenly, the mesh would be shot into liquid ethane at -90º C, flash-freezing the meniscuses. This prevented the water in tissues from evaporating.

The abstract for a March 2009 paper coauthored by Dubochet read, “Water, which was once the arch enemy of all electron-microscopists, became what it always was in nature – an integral part of biological matter and a beautiful substance.”

Atomic resolution typically means a distance of 3.3 angstrom (Å) – more than 250-times smaller than the HIV virus (1 Å is one-tenth of a nanometre). In 2015, a group of biologists from the US pushed the laureate trio’s techniques to the hilt, determining the arrangement of a biochemical structure at a resolution of 2.8 Å. They wrote in their paper, “Reaching resolutions higher than 3 Å is a prerequisite for structure-based drug design and for cryoEM to become widely interesting to pharmaceutical industries. … The results described in this manuscript demonstrate that single particle cryoEM is capable of competing with X-ray crystallography for determination of protein structures of suitable quality for rational drug design.”

Sub-3 Å was a resolution previously reserved only for X-ray crystallography, which made the achievement doubly important. X-ray crystallography requires specimens under study to be crystallised, which is often not possible, and studied in environments inimical to the specimen’s natural ones.

Frank’s contribution is particularly interesting because it augured two prevalent, and convergent, trends in modern chemistry – and in modern science for that matter: machine-learning and computational studies. By 1981, he had developed a computer algorithm that could look at thousands of images of the same proteins generated by an electron microscope and identify similarities. Next, it could produce high-resolution 2D images of the proteins: if one part of one image was fuzzy, the algorithm would identify the same part from another image and fill in the blanks.

While the data-processing machines and algorithms powering 21st century science are far more sophisticated, they are essentially equivalent to what Frank did in the 1970s. His method allows scientists to ‘sample’ specimens with small doses of electron radiation over and over – which means even sensitive matter could be studied – and piece all the images together to get a high-resolution version.

(However, it must be noted that Frank did not pioneer the use of computers to enhance current knowledge. In fact, the ability to assemble a reliable 3D image of a specimen from 2D images was first demonstrated in the 1970s by Anthony Crowther and David DeRosier.)

Since 2010, newer techniques have continued to optimise cryo-electron microscopy. Case in point: when the electrons are shot at the frozen meniscuses, the latter assume a more curved shape because they’re accumulating negative charge. This problem was solved in 2012 with the advent of direct electron detectors, which ‘image’ the doming effect at about 400 frames per second.

But we’re not done yet. Just like powerful telescopes have been able to work together to identify features of the cosmos they could not have seen by themselves, advancements in electronics and chemical engineering are keeping cryo-electron microscopy up to date as well as easily usable. For example, the technique is best suited for meniscuses 1 micrometer thick or less, and can’t achieve high contrasts. To solve these problems, engineers invented ion-beam milling and, subsequently, cryo-electron tomography: an imaging technique where samples are simply tilted or shifted while being studied.

The Wire Science@TheWireScience
3 Following 26.3K Followers
Soumya Swaminathan, the WHO’s chief scientist, has said that the technical advisory group will meet on October 26 t… https://t.co/YRH658MWdo
7 hours ago
1 1
Earlier this month, the WHO said Bharat Biotech has been submitting data on a rolling basis, including additional i… https://t.co/k2WG4iUVTS
18 hours ago
Many parts of India have experienced heavy rains over the past few days, causing floods, waterlogging and landslide… https://t.co/6Oa4veZXyO
20 hours ago
3
Behaviour concerning diet and land travel are particularly important for both achieving net zero and improving popu… https://t.co/WM54GWv1NJ
21 hours ago
1
India’s vaccination campaign has slowed despite amassing record stockpiles of vaccine, health ministry data showed… https://t.co/Go11MWI1HM
24 hours ago
2 2
If you keep watching a comb jelly, you may be able to tell which end is the butt, because you’ll see it eat and you… https://t.co/oDkjNabtFE
1 day ago
1
Estimates on the marshes’ current population vary widely. Once 400,000 in the 1950s, around 250,000 people returned… https://t.co/zEXj43FRVt
1 day ago
2 4
Mumbai on Sunday did not report even a single death due to COVID-19 for the first time nearly since the pandemic br… https://t.co/sD5baSTXKd
1 day ago
2
There are many reports based on scientific research that talk about the long-term impacts of climate change by the… https://t.co/CNxq4fXqeT
1 day ago
2 3
RT @1amnerd: In case you aren't following #ScienceOfTheSeas yet – you should. It's a gentle, intimate and slow exploration of the relations…
1 day ago
12
The index reveals how about 50 countries around the world are in an alarming or serious situation, meaning that hun… https://t.co/6TbO8Z8Jpj
1 day ago
3
The ‘top’ journals are heavily dominated by research produced in and about a few ‘core’ countries, and thus reprodu… https://t.co/iOv1Dw2kjZ
1 day ago
3 5
As a result of scientific publications, for a growing number of 18th-century Britons, merpeople existed, bore a str… https://t.co/QozYn3safz
2 days ago
1
Emerging economies have said effective climate action will require capital and technology from richer nations, inst… https://t.co/BVtYLie7qI
2 days ago
1 6
The overuse of nitrogen and phosphorus from fertilisers is causing an environmental crisis. Policymakers are begin… https://t.co/rh6aaFIKi4
2 days ago
2 5
Contact us

Explained: What Is mRNA?

With an Eye on the Future, India Needs More Cryo-Electron Microscopes