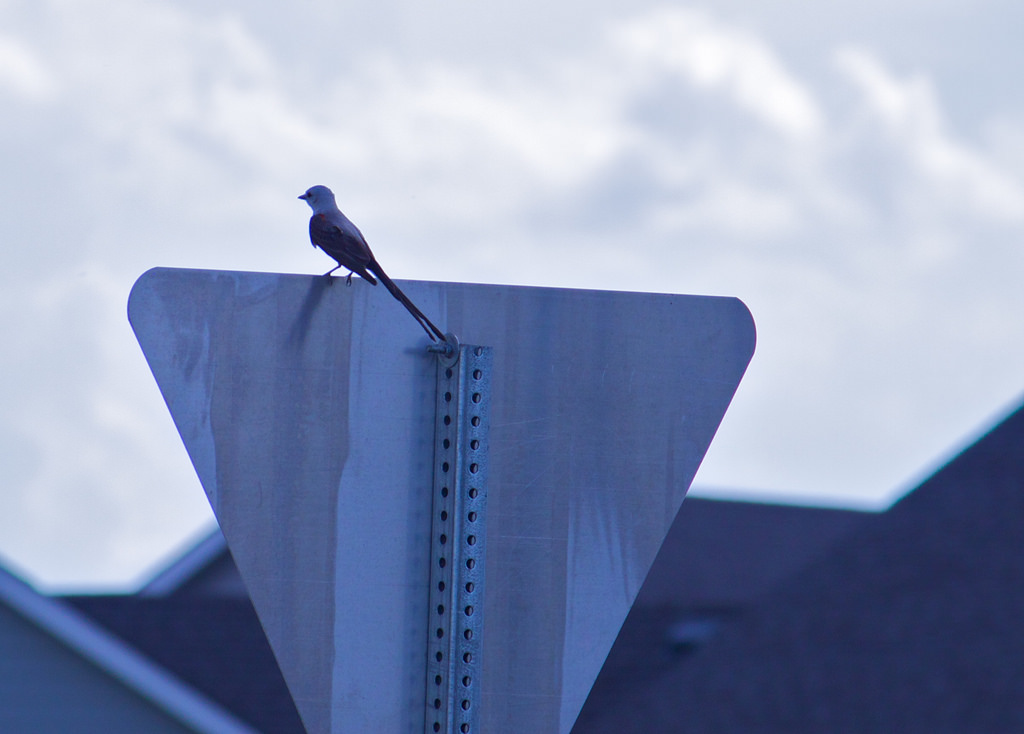 My husband leaned against the outside wall of our house, his arm supporting his weight. Just as he changed position, a common kingfisher shot like a bullet through the narrow space between his neck and the wall. We often wonder what would have happened had he not moved at that instant. Would he have been stabbed in the neck by the bird’s dagger-like beak?

When pursued by raptors, fast-flying birds zip through the woods, ducking branches and swerving around tree trunks. Flycatchers and drongos spot erratically flying insects and go after them with speed and accuracy. Not only do they match their prey’s acrobatics without suffering from motion blur, they predict the flight path of insects, and nab them at a point in space where they expect they will be. Rarely do they go out of control and crash headfirst like speeding motorists. Nor do they collide with obstacles that suddenly appear, like the many accidents that occur each year around the world.

Scientists from Uppsala University, Stockholm University and the Swedish University of Agricultural Sciences, Sweden, investigated the eyesight of three passerine birds. Passerines are a group of perching birds that have three forward-facing toes and one back-facing one. Many of them are songbirds.

Among them are the blue tits, collared flycatchers and pied flycatchers. Why did the researchers pick them? “There was ongoing research on blue tit behaviour at Stockholm University’s Tovetorp research station in Södermanland,” explains Anders Ödeen of Uppsala University, senior author of the paper. They knew the birds could be trained for experimental tasks and that inspired more research. “We chose to work with flycatchers partly because they are more dependent on catching insects for survival, a behaviour that likely selects for high temporal resolution, and partly because after decades of research on pied flycatchers and collared flycatchers, we know the ecology and genetics of these species.”

While blue tits are insectivorous only during the breeding season, collared flycatchers and pied flycatchers hawk insects throughout the year. The scientists looked at the number of changes the birds can perceive per second. The measure is called temporal resolution.

Researchers suspect small, agile birds would have fast vision. Since the birds are small, they can be extremely manoeuvrable. Their high metabolic rates ought to allow fast changes in the photoreceptor membrane of their eyes. The researchers predicted the birds would perceive changes up to 100 Hz.

To test their estimate, the researchers conducted an experiment. They caught 18 birds from the wilds of south-eastern Sweden and Öland island in the Baltic Sea. These birds were trained with rewards to distinguish between a flickering lamp and one that burned steadily.

During the experiment, the researchers increased the flicker rate until the birds couldn’t tell the two lamps apart. This threshold is called the critical flicker fusion rate. The threshold for blue tits was 131 Hz and for collared flycatchers, 141 Hz. The pied flycatcher’s threshold was a high 146 Hz. Their vision was so fast that Usain Bolt’s 100-metre dash would seem like a slow motion stroll. In comparison, the critical flicker fusion threshold for humans is a mere 60 Hz.

“This is great paper,” says Kevin Healy, a PhD student at Trinity College, Ireland. “It’s very interesting to see such high temporal perception values in bird species, especially when considering they measured it using behavioural experiments. As relatively few species’ temporal perception has been measured, studies such as this will add more data and knowledge to our understanding of the evolution of such traits.” Healy wasn’t involved in this study.

The video clip visualises one advantage of the ultra-rapid vision discovered in birds. The almost three times faster refreshment rate of visual input in a pied flycatcher than in a human makes it far easier to track and predict the flight paths of two blue bottle flies. This is most likely a crucial ability for a bird that catches its airborne prey on the wing. Credit: Malin Thyselius

The researchers say the pied flycatcher’s threshold was about 50 Hz above the highest rate for any other vertebrate. The birds’ fast vision exceeded the researchers’ expectations.

“Before this study, most of what we knew about avian temporal resolution came from studies of domesticated, ground-dwelling birds or those that live in rather dim or dark environments,” explains Ödeen. “However, diurnal and airborne lifestyles are very common among birds.” And for this reason, “'[f]ast vision may, in fact, be a more typical feature of birds in general than visual acuity,” said Ödeen, in a press release.

“While there is still much to understand regarding the evolution of temporal perception across species, these results support the idea that a fast paced lifestyle is one of the main drivers of acquiring fast paced perceptual abilities,” says Healy. “While it has been predicted that species that hunt fast-moving prey, such as insects on the wing, would require equally fast paced vision, this is the first time a species with this aerial hunting strategy has been measured.”

Birds of prey, like eagles, have the sharpest vision known. They can spot prey on the ground while they hover high up in the sky. While they have great visual acuity, capable of spotting a number of details per degree in their field of vision, they don’t have the ability to track changes in microseconds. To follow rapidly moving targets, birds have to increase their visual refresh rates. Small birds compromise visual acuity in favour of speed.

Since more than half of all bird species are passerines, Ödeen says, in future, he’d like to test if closely related bird species have fast vision, too. Or is it restricted to insectivorous birds specifically?

“We cannot say how widely distributed fast vision is in the phylogenetic tree of birds,” he says. “That is something that we would like to clarify. We are interested in finding out the ecological driving mechanism behind this trait.”

“These species seem to have temporal perceptions at levels more comparable to some insect species as opposed to most vertebrates,” says Healy. “This suggests that these species go above and beyond the temporal abilities found in other bird species, and it will be very exciting to see how other species with different hunting strategies might fit into the overall picture.”

The results have implications for captive birds’ welfare, says Ödeen. His previous work with chickens’ flicker rate highlighted these concerns. Many low-energy light bulbs, fluorescent lamps and LED lights flicker at 100 Hz. Even if the flicker is invisible to our eyes, captive songbirds, with visions more than twice as fast as ours, are likely to see it. Flickering light can cause stress, behavioural disturbances and discomfort.

Although kingfishers are not passerines, their temporal resolution is likely to rank high. Or at least, I hope so. That may be why the common kingfisher narrowly missed impaling my husband’s neck. The paper was published in the journal PLOS ONE on March 18, 2016.