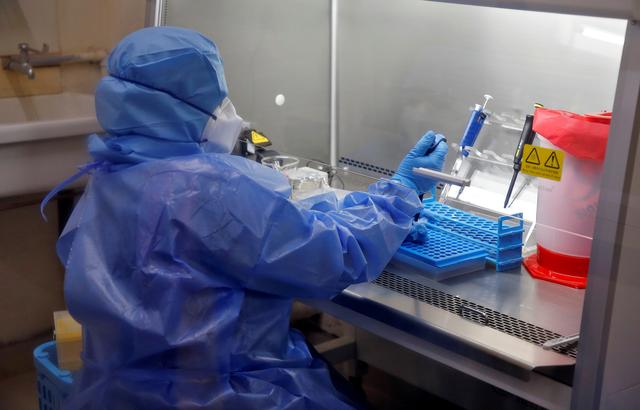 A microbiologist processes coronavirus disease (COVID-19) tests in a lab at the Government Medical College in Kochi, India. Photo:Reuters/Sivaram V

New Delhi: Deficiency of a lung-protecting protein in the Caucasian population may have made Europe and North America more susceptible to the spread of a coronavirus variant as compared to Asia, suggests a study by Indian scientists which also reveals how mutant forms of the virus may find new ways to infect people.

The study, published in the journal Infection, Genetics and Evolution, assessed the global spread of the coronavirus variant with the D614G mutation, which is the predominant lineage infecting North America and European populations.

This variant spread so rapidly that in just 10 weeks between February and March 2020 over 64.11% of globally infected individuals were identified to carry the mutant virus starting from only 1.95% in January.

However, the researchers, including those from the National Institute of Biomedical Genomics (NIBMG) in Kalyani, West Bengal, said this subtype took a significantly longer time to reach a 50 per cent relative frequency in East Asia – 5.5 months – compared to the 2.15 months it took in Europe, and the 2.83 months it took in North America.

According to the scientists, a deficiency of the protein Alpha-anti-trypsin (AAT) across the populations of Europe and North America is one of the main factors that explain the rapid spread of this variant in the two continents compared to its transmission in Asia.

“For the coronavirus to enter cells, its spike protein binds with the ACE2 receptor in human cells, and the human enzyme TMPRSS2 cleaves at the junction of two subunits S1 and S2 of the protein, enabling the virus to fuse with the cell,” said study corresponding author Nidhan K Biswas from NIBMG.

“But due to the D614G mutation in the spike protein, the virus gained an additional cleavage site which enables it to fuse better with cells,” Biswas told PTI.

In lineages of the coronavirus carrying the D614G mutation, the 614th molecule of the virus spike protein – aspartic acid – denoted by D is replaced by the molecule glycine, noted as G.

“Instead of one cleavage site, the mutated virus has two such sites, and it can take dual advantage of this and enter cells more easily,” Biswas explained.

Based on the current study, he said this site in the virus is cleaved by the host protein neutrophil elastase which is normally involved in clearing up bacterial infections in the lungs.

The levels of the elastase molecules in the body are naturally kept in check by AAT whose main function is to protect the lungs from inflammation and tissue damage, the study noted.

“The issue is that if we have high neutrophil elastase then it also creates more damage to the lung cells. So there is a balance mechanism via the AAT enzyme that already exists by nature in everyone’s lungs,” Biswas explained.

According to the study, AAT deficiency is highly prevalent in European and North – American populations, but much less in East Asia.

Specifically, Biswas said AAT deficiency in the general population is very high in Italy and Spain.

He explained that the lack of this protein makes it much easier for the neutrophil elastase molecule to act on the virus spike subunits, resulting in a significantly faster spread of this mutant.

“The issue is that individuals with AAT deficiencies have high neutrophil levels and if they are infected with the SARS-CoV-2 virus with the D614G mutation, their cells can quickly take the virus up and into the whole system,” the NIGMB scientist explained.

The researchers believe this finding, along with other social factors may explain the differential geographical/ethnic spread of 614G.

While the findings offer clues about the transmission of the virus variant, Biswas cautioned against any interpretations of the study on disease severity and mortality caused by the strain.

He said the research also provides some clues on the spread of other variants of the coronavirus such as the ones first reported in the UK and South Africa which are “built on the backbone of the D614G mutation.”

“The UK and South African variants also have this mutation backbone so they may have a similar transmissibility pattern, and probably they may have additional capabilities that scientists need to find out,” Biswas added.

However, he said further experimental studies on lab – cultured cells are needed to validate these conclusions.

The scientists believe the findings open up the possibility for considerations of AAT supplements in the prevention of infection with the D614G subtype SARS-CoV-2 virus.