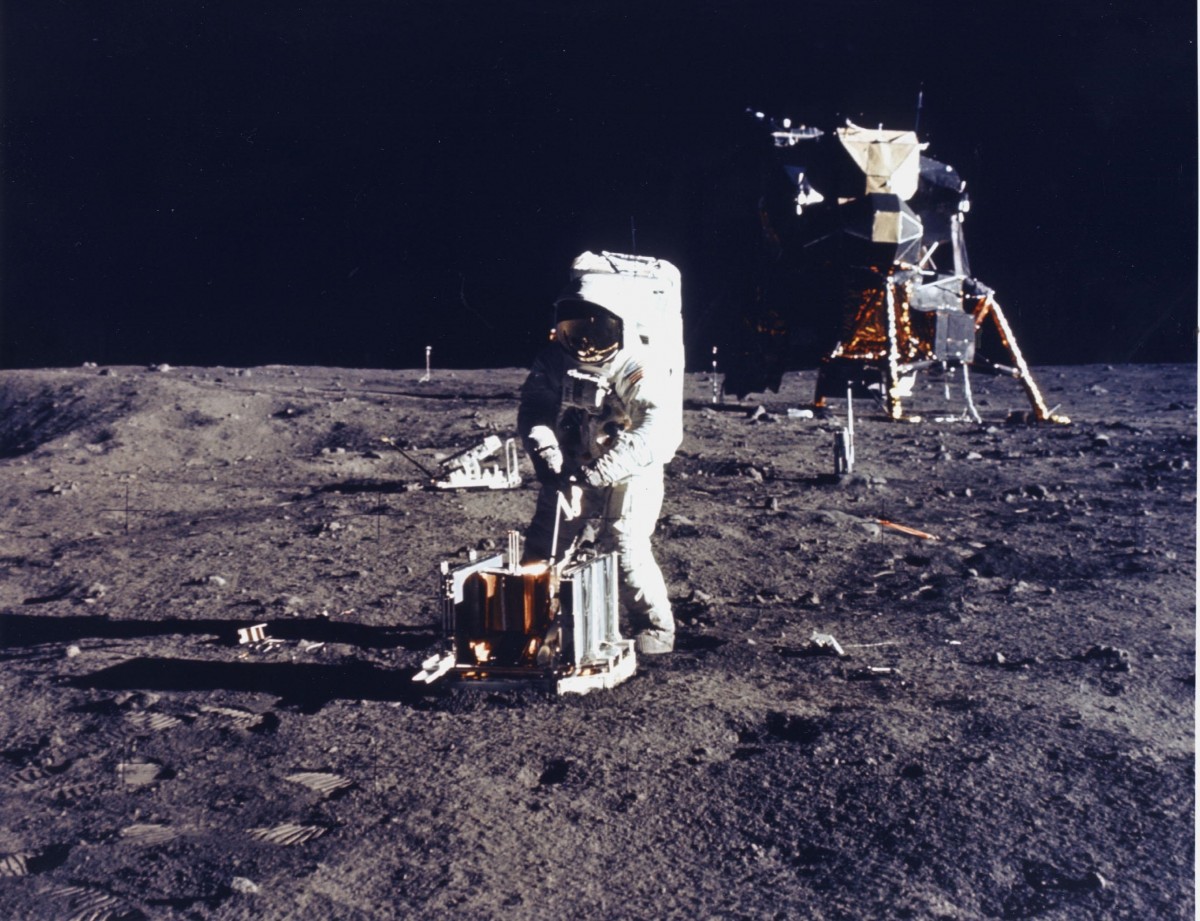 Fifty years ago, on July 20, grainy television pictures of the first humans setting foot on the Moon changed the world forever. Just four days earlier, a global audience watched in awe as Apollo 11 launched Moonward carrying Neil Armstrong, Edwin ‘Buzz’ Aldrin and Michael Collins on the Saturn V rocket, the most powerful machine ever built. Over the next three days, millions eagerly followed Apollo 11’s flight as it coasted towards its lunar rendezvous, leaving an indelible impression on a Moon-struck generation.

As a nine-year-old growing up in those heady days of the first Moonshots, I vaguely remember the excitement that filled drawing rooms and classrooms alike when Armstrong and Aldrin descending, in the lunar module named Eagle, over the Moon’s surface. And how Collins, in the orbiting command module Columbia, became the loneliest Earthling in history as the spacecraft went behind the Moon (which blocked radio transmissions with mission control). The landing, the “small step” and the “giant leap”, the flag, the rocks – all so surreal – infused in humankind a new spirit of adventure and exploration. The Moon would no longer be just another celestial body, and the skies would never be the same again.

When Apollo 11 returned on July 24, 1969, NASA had hardware for nine more moon landings, with Apollo 20, envisioned as the grand finale, landing astronauts on the Copernicus crater, a prominent lunar feature you can see with the unaided eye. And it seemed only a matter of time before the Moon was colonised and Mars missions materialised. Alas, that was not to be as there were only five more lunar missions, apart from the ill-fated Apollo 13, whose crew barely returned to Earth from lunar orbit when an oxygen tank in the service module burst, with the able and ingenious guidance of mission controllers.

After a dozen moonwalkers planted flags, hit golf balls and brought back kilograms of moon rocks to Earth, NASA scrapped the last three missions. The control consoles at the Kennedy Space Centre fell silent, only to flicker into life briefly in the mid-1970s for the Apollo-Soyuz missions and, later, to preside over unmanned space probes.

A half-century after Apollo 11, the progress achieved by crewed spaceflight seems negligible compared to the giant strides made in just 12 years between the launch of Sputnik 1 (1957) and the first Moon landing (1969). In fact, from the late 1970s, human space exploration was confined to routine swings in low-Earth orbit by the Russian space station Mir and Soyuz cargo ships, NASA’s space shuttles, the International Space Station and, more recently, Chinese suborbital flights.

The problem clearly had little to do with technology and more to do with political will – rather the lack of it. After all, the average laptop today has 10-times as much computing power than the machine used to put the first men on the Moon! So it is good to see space agencies and private companies using cutting-edge technology to plan their return to the Moon, and this time to stay. Early settlers will learn to live off the lunar ‘land’, conducting research and developing a ‘lunar economy’. A self-sustainable Moon base, along with the very low lunar gravity, would make an excellent launch pad for the human exploration of Mars and the outer Solar System.

But unlike the Soviet-American rivalry that powered Space Race 1.0, mercantile interests fuel the new race to the Moon. Many players jostle for pole position, anticipating a time when Moon colonies will become reality. With New Age mantras like ‘commercialise space’ and ‘militarise space’, there is little room to think about spaceflight purely in terms of space exploration. The space pioneers of yesterday would likely disapprove of this as they quietly make way for a new breed of space enthusiasts.

Curiously, the Apollo moonshots are more relevant today than in the 1960s, when ordinary people shelved personal dreams to make an extraordinary endeavour possible: President John F. Kennedy’s promise of “landing men on the Moon and returning them safely” within a decade.

Although powered by Cold War rivalry, the Apollo missions had unexpected fallout: they opened our eyes to the fragility of this blue green planet. Apollo astronauts realised this and voiced the need for global cooperation to preserve Earth. As Armstrong discovered standing on the Moon: “It suddenly struck me that that tiny pea, pretty and blue, was the Earth. I put up my thumb and shut one eye, and my thumb blotted out the planet Earth. I didn’t feel like a giant. I felt very, very small.”

Fifty years on, a world riven by strife desperately needs such inspiration to face its many challenges. That, more than anything else, defines the legacy of Apollo 11.

The Wire Science@TheWireScience
3 Following 26.4K Followers
Robots were so prevalent in the imaginative and material culture of the Greek-speaking world that they were seen as… https://t.co/XkpbIJ9C7k
13 hours ago
2
The study also reported that Covishield could prevent moderate-to-severe disease in 81.5% of cases. | @Banjotkaur https://t.co/HcBSVfIfZU
16 hours ago
2
In mid-2021, the National Green Tribunal took suo motu cognisance of the issue of elephants being hit by trains and… https://t.co/LH9UuZxgQn
22 hours ago
2
The study also reported that Covishield could prevent moderate-to-severe disease in 81.5% of cases. https://t.co/HcBSVfqF8m
23 hours ago
3
Workers and associations have demanded, and continue to demand better working conditions, but progress has been slo… https://t.co/46IJMPozZg
24 hours ago
The ‘Deep Adaptation’ movement situates the conversation about society’s future in a new realm, one in which catast… https://t.co/iKhxkkxiLp
2 days ago
1
Recurring instances of elephants being hit by trains running between Kanjikode and Madukkarai stations have highlig… https://t.co/9Z5oEriiT5
2 days ago
2
South Africa is well set up for variant hunting thanks to a central repository of public sector laboratory results,… https://t.co/Dz6ie1HsRt
2 days ago
2 3
A new study by scientists in India has reported that Covishield is 63% effective at preventing a SARS-CoV-2 infecti… https://t.co/7b1w5mjJ21
2 days ago
1 2
Vaccine equity campaigners have long warned the EU that sharing doses was essential to prevent new variants emergin… https://t.co/jqzfFjN9ww
2 days ago
1
A frontline forest worker’s job often involves high personal risk to life and a gamut of other challenges – but it… https://t.co/Ol5v3CrExi
2 days ago
3 5
An WHO expert group has designated the B.1.1.529 variant ‘omicron’ and classified it as a variant of concern. Muta… https://t.co/ATQ2IAQkXz
2 days ago
1 1
The Centre asked all states and union territories to conduct rigorous screening and testing of all international tr… https://t.co/re7BN5toEI
2 days ago
1
Setting nets near reefs is tricky. You want to be close enough to net the fish that hang out near the reef. But yo… https://t.co/CTUfS7HRpX
2 days ago
1 7
#Omicron: Richard Lessells, an SA-based infectious disease expert, expressed frustration at travel bans, saying the… https://t.co/rrQw9y5HXq
2 days ago
7 17
Contact us

The Vexing Problem of Space Pollution