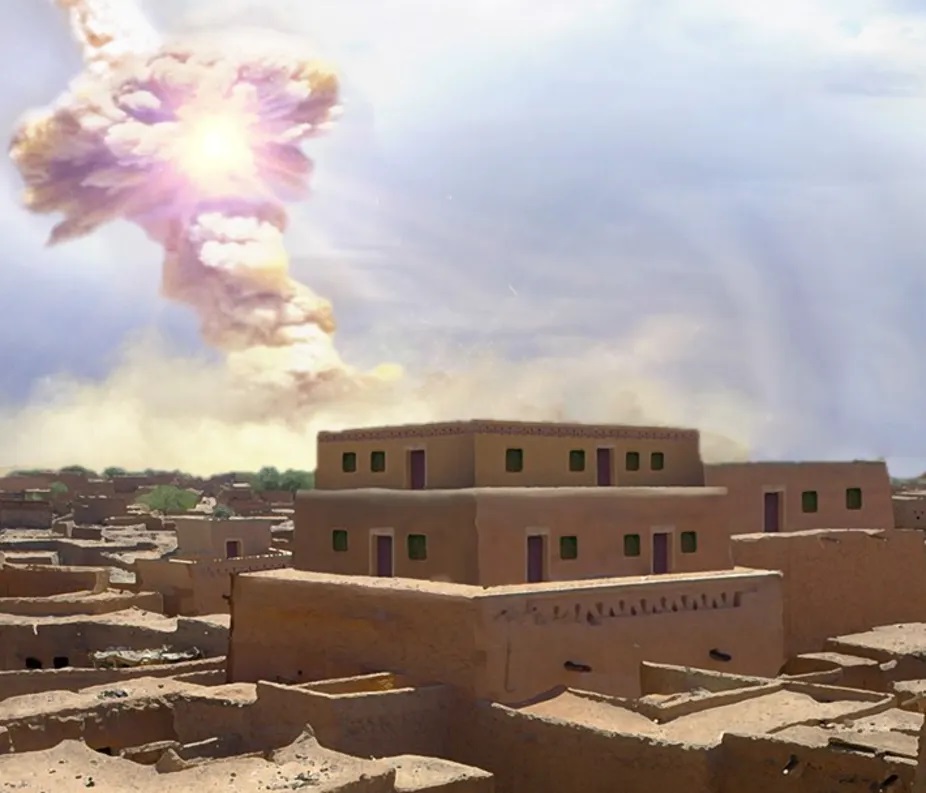 New Delhi: A paper that was published by the journal Scientific Reports, claiming to provide evidence for the Biblical story of the devastation of the city of Sodom, has come under scrutiny following allegations of image manipulation and cherry-picked data.

The paper, entitled ‘A Tunguska sized airburst destroyed Tall el-Hammam a Middle Bronze Age city in the Jordan Valley near the Dead Sea’, says that around 1650 BCE (3,600 years ago), a “cosmic airburst” caused by an asteroid destroyed the city in the southern Jordan Valley.

It reports evidence of melted pottery and plaster, shocked quartz and diamond-like carbon from a dig site at the city, which it says suggest that the city was exposed to a sudden, high-temperature event. This event was caused by the explosion of a “space rock” about 4 km above ground, resulting in “a massive shockwave” smashing into the city, demolishing every building, the study’s authors say.

As one of them wrote for The Conversation, “It’s possible that an oral description of the city’s destruction may have been handed down for generations until it was recorded as the story of Biblical Sodom.”

Biblical legend says that Sodom was “consumed with fire and sulphur”, destroyed by god for the sins of its inhabitants.

The paper became very popular and was ranked “as the top article for online attention among papers published at the same time”, according to Retraction Watch, a website and publication that reports on retractions of scientific papers.

However, concerns about potential image manipulation soon emerged. Dutch microbiologist and celebrated science integrity consultant Elisabeth Bik pointed out on PubPeer – a website where users discuss and review scientific research – that many images in the paper seemed to have repetitive elements.

Writing on her blog, she speculated that the “authors maybe did not have access to the original photos, but might have used photos previously published on blogs or in books about the Tall el‐Hammam dig, photos that perhaps contained labels or other elements that the authors may have wished to remove”.

Bik also raised concerns about the affiliations of two of the paper’s co-authors and the potential for conflict of interest. Alan West and Timothy Witwer are affiliated to the Comet Research Group, whose mission, Bik said, “appears to be to show that ancient cities were frequently destroyed by comets” and to do something about comets before “your city is next”.

Indeed, both the abstract for the paper and The Conversation article end with speculation that cosmic airbursts, such as the one they claim destroyed Tall el-Hammam, pose severe modern day hazards.

A denial, then admission

Phillip Silvia, the senior author of the study, denied any of the images were any manipulations to the images. He told Retraction Watch on October 1:

“As far as the comments made in the link you provided are concerned… Note that they are all ad hominem attacks against the authors (including myself) and the institutions (like TSU) and affiliations (like the Comet Research Group) with which we are associated. None of their comments address the science within our paper, probably because they have nothing of value to add to the discussion.”

But in a blog post that was published after Silvia’s denial, another co-author of the study, George Howard, admitted that a “graphic artist made minor, cosmetic corrections to five of 53 images”.

“All of [the corrections] were distant from any important scientific data and no changes were made to key data, such as bones or potsherds,” he said, including the “original unaltered images” in the post. “We have already submitted corrected images to Scientific Reports,” he added.

The original images showed that the manipulations were to remove labels and arrows present in other versions of the photos.

Bik noted, “Interestingly, the Scientific Reports paper presents the images as novel, and does not clarify who originated them, and whether they could have been published before.” She added that the alteration of parts of photos “appears to be in conflict with Nature/Scientific Reports guidelines about image preparation”.

Richard White, the chief editor of Scientific Reports, told Retraction Watch that the journal is aware of the concerns that have been raised and that it is considering them carefully.

Meanwhile, other researchers also found issues with claims made by the paper that the destruction of mud walls in Tall el-Hammam was “unique”.

Bioarchaeologist Meagan Perry said on Twitter on September 23 that the paper’s claims of mudbrick fragmentation/debris, “shearing” off of mudbrick walls and missing mudbrick “aren’t any different than a typical excavation of mudbrick walls built upon stone foundations”.

Perry also criticised the study for not consulting with someone familiar with skeletal trauma and taphonomy1 to analyse human remains. The paper claims that the remains, which it admits may  be either of humans or small mammals, were “rapidly entombed by pulverized mudbrick”.

Perry said that the study’s use of a “medical doctor” to provide skeletal analysis “is simply laughable”. She concluded by saying that the study and the paper demonstrate the “danger of being strongly wedded to one hypothesis” and “cherry-picking data to support it”.