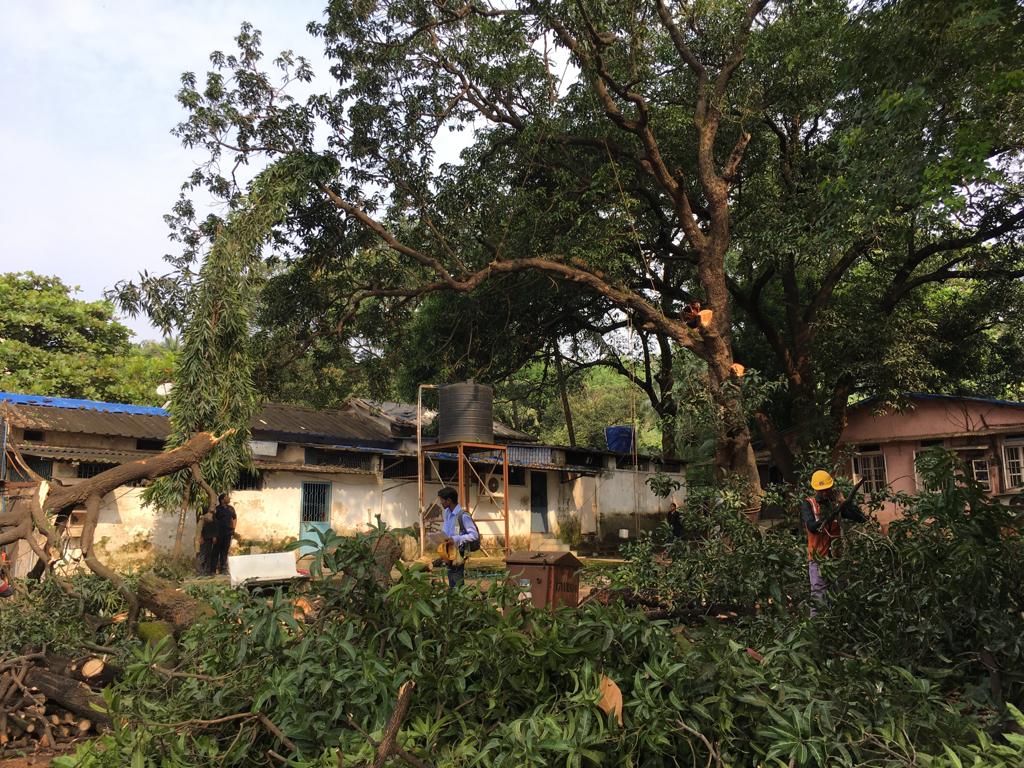 As IMD Predicts Excessive Rainfall for Upcoming Monsoon, How Is Tamil Nadu Gearing Up?

Mumbai: A battle has broken out between green activists and the Mumbai Metro Rail Corporation Limited (MMRCL) over the felling of trees in the city and specifically in over 1,200 hectares of green patch in northern Mumbai. Last week, a group of them was detained for several hours in a police station after they protested against trees being cut indiscriminately by the Corporation’s workers.

“The police had initially planned to book us under Section 149 of the Indian Penal Code for unlawful assembly but eventually let us off with a written undertaking that we won’t intervene again,” said Seema Bhavnani, one of the 17 persons who was detained. The group included college students and young professionals.

On September 28, as Asha Bhoye returned after a long day’s work at an anganwadi in her tribal hamlet in Prajapurpada, nestled deep inside Aarey colony in Mumbai, she was in for a rude shock. Even before she could gather herself, she says, the MMRCL officials had cut down 15 fully grown trees near her home. All of them had been planted by her ancestors.

Along with these, the MMRCL had felled over 200 trees in a matter of two days; what is more, the organisation claimed it had official ‘permission’ to do away with over 2,700 trees in Aarey. Situated in north Mumbai, Aarey is the only green-belt area in Mumbai’s suburbs, an oasis in the rapidly spreading urban sprawl.

MMRCL moved swiftly after an order passed the principal bench of the National Green Tribunal (NGT) in New Delhi that finally cleared the decks for construction of a car depot for Metro III project in Aarey.

This came four years after a city-based NGO Vanashakti had approached it protesting against the depot for the 33 km line between south and north Mumbai. The NGT asked the petitioner to approach the High Court or the Supreme Court claiming it doesn’t have the jurisdiction to decide whether Aarey was a forest. The Metro III project is billed to cost around Rs 23,316 crore and the depot is planned to come up on 34 hectares of land. Vanashakti has been in the forefront of agitating against the depot, arguing that there are alternative sites available. Moreover, activists claim that the depot will open up the vast green area to indiscriminate construction.

Aarey is home to tribals who have been living there for generations, slums and cowsheds which supply milk to a locally situated government run dairy. A builder had managed to get permission to construct a hotel and a few towers, but it is largely untouched by construction and is a popular picnic spot. Activists say that developers have an eye on the land. D. Stalin of Vanashakti has argued that it is actually a forest and therefore cannot be touched, a contention that a state minister recently challenged.

A band of dedicated citizens has been converging at Aarey for months to protest the building of the car shed, claiming that there are other equally suitable places to build it. Political parties like the Shiv Sena had lent their support to the agitation but have since done a U-turn. The MMRCL has argued that Aarey is the best location for the shed.

Bhoye alleges while the MMRCL had come equipped with the required orders to only cut a small batch of trees, they also went ahead felling those trees that were not “numbered”. These are trees that the Corporation has said would be ‘replanted’ in other areas, though they will take years to grow.

MMRCL had plans to cut over 2,700 trees in Aarey. But as soon as their workers, backed by the local Aarey police, began the work, Bhoye and other residents of Prajapurpada contacted several citizen groups that have been actively working towards conserving the forest and have been petitioning against the state’s decision to flatten the trees for the Metro car shed. “I reached the spot around 4 pm, as soon as I received a call from Asha [Bhoye]. MMRCL officials and the police had surrounded the area near Asha’s house and cattle shed nearby. But since there were no tree officials along with them, I intervened,” said Aparna Bhangia, a who lives nearby. She, along with Bhoye, approached the Aarey Marg police for help.

Thousands of our readers believe that free and independent news can be a public-funded endeavour. Support The Wire and join them.

Each time the tree authorities grants permission to cut trees, it has to be put up on the Brihanmumbai Municipal Corporation’s website in order to invite opposition and suggestions. A division bench of Justice Shantanu Kemkar and Justice Sarang Kotwal had issued the order in April this year to ensure there is a complete transparency in the process. It had further ordered that non-official members with expertise in plantation and preservation of trees and belonging to different NGOs should be appointed in the tree authority of municipal corporation and the number of such appointed experts in the tree authority should not exceed the number of corporators. However, it is alleged that the present tree authority has not complied with the HC’s order.

Tree activist Zoru Bhathena and Aam Aadmi Party’s (AAP) Maharashta unit have approached the HC with two separate petitions and have alleged that the Tree Authority committee was constituted without taking the earlier HC order into consideration. However, an MMRCL official requesting anonymity told The Wire that the process of cutting trees were carried out on following proper process. “We had approached the Tree Authorities of the BMC and on receiving the requisite clearance, the work was undertaken,” said an official. The Bombay high court on October 3 asked the MMRCL to file an affidavit stating that no tree would be touch without the requisite order from the authorities concerned. “Make a statement on an affidavit that you will not cut any tree without obtaining the requisite permissions,” acting Chief Justice Naresh Patil said. The matter was heard by the court’s division bench of Justice Patil and Justice Girish Kulkarni. The case will next come up for hearing on October 8.

A citizens group along with AAP members meanwhile has started “Let Mumbai Breathe” – a website that enables citizens to send objection mails to the BMC. “The website managed to receive over 22 thousand objections by the end of October 3,” says Aditya Paul, state joint secretary, AAP.

Amrita Bhattacharjee of the Aarey Conservation Group, which has been actively working along with the tribal community of the area and has been instrumental in seeking High Court’s intervention pointed out that the agitation is “no more about the 33 hectares of land that the MMRCL had sought for building the car shed. MMRCL has approached the Environment ministry to de-notify around 165 hectares of eco-sensitive land. Almost the whole of Aarey, Mumbai’s lungs, is under threat.”

The Wire Science@TheWireScience
4 Following 26.6K Followers
Mathematicians have been playing around with pattern formation equations since Alan Turing published his seminal pa… https://t.co/zwKD3DLDpp
10 hours ago
1
With a final 5-minute, course-correcting thrust of its onboard rocket, Webb reached its destination at a position o… https://t.co/nDguB9BEvV
11 hours ago
1
The operator of the Fukushima nuclear power plant said two storage tanks had leaked four tonnes of coolant being us… https://t.co/teUqYH3cZO
12 hours ago
1
Ant colonies put up with inefficient gold bricks in their midst. Did these ants perform an essential service? Did t… https://t.co/5ZMf7cZAIh
13 hours ago
Substance metaphysics lacks information about change, while process philosophers go beyond looking at the world as… https://t.co/j6FC8r5Dxc
14 hours ago
1
Only seven years after birth, the rate at which new neurons are formed in the adult human hippocampus falls by 23-t… https://t.co/uqpjwpSn35
15 hours ago
3
India's latest 'State of Forest' report continued a tradition of counting plantations and forests together as 'fore… https://t.co/zQLSP1nmjG
16 hours ago
3 3
Mutations on the LBR gene can have a wide spectrum of effects – ranging from a benign condition to a perinatal leth… https://t.co/zFJrmcaSp7
17 hours ago
Looking at the chemistry of past eruptions, the small eruptions indicate that the volcano's magma system is slowly… https://t.co/TRQMOvIiA6
19 hours ago
9 14
Cold wave to severe cold wave is very likely in isolated pockets of Punjab, Haryana, Uttar Pradesh, Maharashtra, Ra… https://t.co/exK2FupOgc
20 hours ago
The asteroid chunk was nearly 15 km in diameter and hit Earth at faster than 20 km per second – imagine a Mt-Everes… https://t.co/27X7g0r9w4
21 hours ago
The bar-headed goose's adaptations work well for occasionally spending short periods of time at high altitudes, but… https://t.co/C4lS0huGHJ
22 hours ago
Black holes have fascinated the human mind since they were first conceptualised a century ago and we have a long wa… https://t.co/bqkG4Ua2js
1 day ago
2 2
A study has found that, contrary to popular belief, human settlements in South Africa flourished in the immediate a… https://t.co/CpL22MDyLO
1 day ago
2 1
An analysis also suggests that in 54 assembly constituencies, more than 10,000 voters can benefit, and more than 50… https://t.co/f9c9Yk0Vsb
2 days ago
2
Contact us

Mumbai: ‘96% Of COVID Patients on Oxygen Are Unvaccinated’