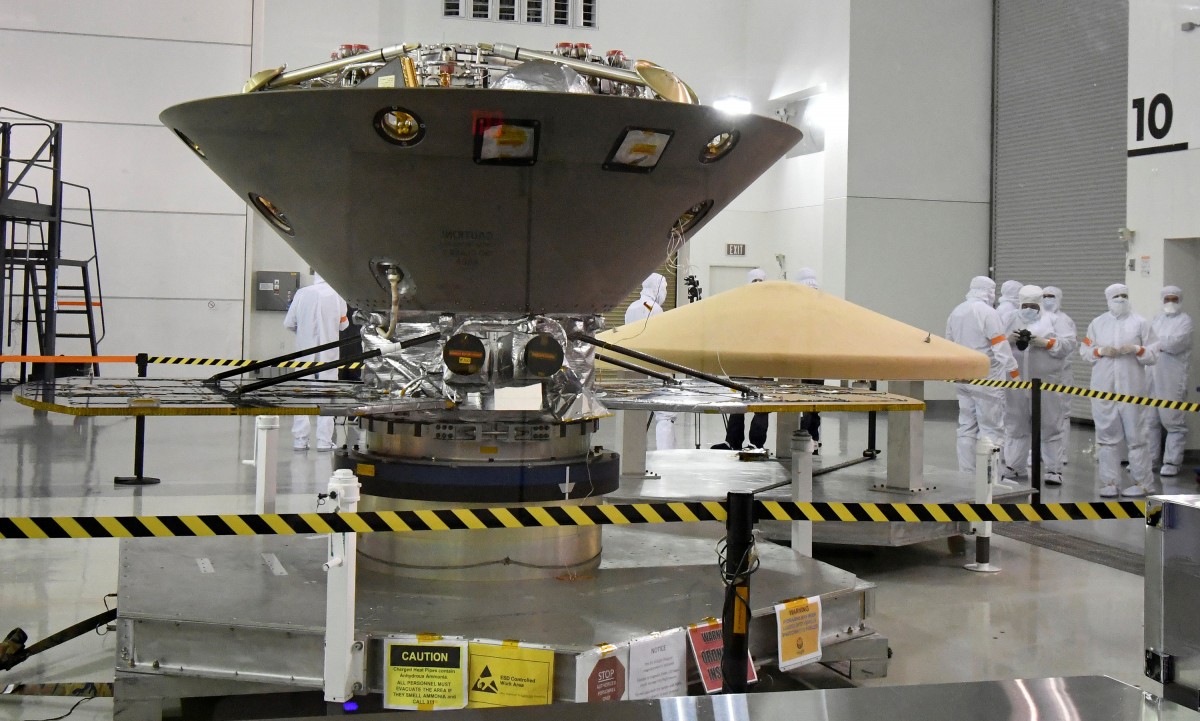 Indian Science Institute Announces Research on Medical Use of Cannabis

Los Angeles: NASA’s first robotic lander designed to study the deep interior of a distant world hurtled closer to Mars on course for a planned touchdown on Monday after a six-month voyage through space.

Travelling 301 million miles (548 million km) from Earth, the Mars InSight spacecraft was due to reach its destination on the dusty, rock-strewn surface of the Red Planet at about 3 p.m. EST (2000 GMT).

The mission control team at NASA’s Jet Propulsion Laboratory (JPL) near Los Angeles prepared to conduct a final adjustment to the InSight’s flight path on Sunday to manoeuvre the spacecraft closer toward its entry point over Mars.

If all goes according to plan, InSight will streak into the pink Martian sky nearly 24 hours later at 12,000 miles per hour (19,310 kilometres per hour). Its 77-mile descent to the surface will be slowed by atmospheric friction, a giant parachute and retro rockets. When it lands 6-1/2 minutes later, it will be travelling a mere 5 mph (8 kph).

Also Read: Five Reasons to Forget Mars for Now and Return to the Moon

The stationary probe, launched from California in May, will then pause for 16 minutes for the dust to settle, literally, around the landing site before its disc-shaped solar arrays unfurl to provide power.

Engineers at JPL hope to get real-time electronic confirmation of the spacecraft‘s safe arrival from miniature satellites that were launched along with InSight and will fly past Mars.

The JPL controllers also expect to receive a photo of the probe’s surroundings on the flat, smooth Martian plain close to the planet’s equator called the Elysium Planitia.

The site is roughly 373 miles (600 km) from the 2012 landing spot of the car-sized Mars rover Curiosity, the last spacecraft sent to the Red Planet by NASA.

The smaller, 880-pound (360 kg) InSight – its name is short for Interior Exploration Using Seismic Investigations, Geodesy and Heat Transport – marks the 21st US-launched Martian exploration including the Mariner fly-by missions of the 1960s. Nearly two dozen other Mars missions have been sent from other nations.

InSight is the first dedicated to unlocking secrets from deep below the Martian surface. The lander will spend 24 months – about one Martian year – using seismic monitoring and underground drilling to gather clues on how Mars formed and, by extension, the origins of Earth and other rocky planets of the inner solar system more than 4 billion years ago.

“What this helps us understand is how we got to here,” said JPL’s Bruce Banerdt, InSight principal investigator, during a pre-landing briefing with reporters last week.

While Earth’s tectonics and other forces have erased most evidence of its early history, much of Mars – about one-third the size of Earth – is believed to have remained largely static over the eons, creating a geologic time machine for scientists.

InSight’s primary instrument is a highly sensitive French-built seismometer, designed to detect the slightest vibrations from “marsquakes” and meteor impacts.

Also Read: Why NASA Chose Senegal to Find out More About an Asteroid in Outerspace

Scientists expect to see a dozen to 100 marsquakes over the course of the mission, producing data to help them deduce the size, density and composition of the planet.

The Viking probes of the mid-1970s were equipped with seismometers, but they were bolted atop the landers, a design that proved largely ineffective.

InSight also is fitted with a German-made drill to burrow as much as 16 feet (5 meters) underground, pulling behind it a rope-like thermal probe to measure heat.

Meanwhile, a radio transmitter will send signals back to Earth, tracking Mars’ subtle rotational wobble to reveal the size of the planet’s core and possibly whether it remains molten.

The InSight and next rover mission, along with others in the planning stage, are seen as precursors for eventual human exploration of Mars, NASA officials said.

The Wire Science@TheWireScience
3 Following 14.4K Followers
Astronomers have identified lakhs of galaxies – and only around 800 have radio jets bigger than 700 kilo-parsecs in… https://t.co/AY9joyVp9Q
6 hours ago
ICYMI: Though the strains, which are missing one or two key genes present in the wild African swine fever virus, do… https://t.co/sHt19vvdRV
7 hours ago
1
Astronomy and physics, which offer glimpses of the farthest reaches of the universe and perhaps shed light on ancie… https://t.co/R8qydbmJly
8 hours ago
During the COVID-19 pandemic, PhD students lost precious data needed to conclude their theses and meet project obje… https://t.co/fq160Cattp
20 hours ago
5 5
It's true that the nilgai is responsible for significant damage to crops across large parts of northern India. Howe… https://t.co/hwufzaci3i
21 hours ago
1
ICYMI: India has gifted vaccine candidates to neighbours and partners such as Bangladesh, Nepal, Bhutan, Seychelles… https://t.co/EAIZHCOqXk
22 hours ago
Though none of India’s territory directly falls in the Arctic region, it is a crucial area as the Arctic influences… https://t.co/Nyl75CBWTG
24 hours ago
2 2
Egypt has unveiled a significant new archaeological discovery at the Saqqara necropolis south of Cairo, including 5… https://t.co/ishg5D2y3U
1 day ago
2 6
The division bench said, “Out of six members at least four members may not have expertise. Was there an application… https://t.co/yAADRkOafc
1 day ago
2 4
In a new series, Shyama Rajagopal @ShyamaRaj10 will focus on the ground realities of Ayurveda as it is practiced to… https://t.co/JHXgu29q7t
1 day ago
1 4
The Rajasthan government's decision to scrap middle agents between itself and private clinics is worrisome because… https://t.co/Cn6siTiRRC
1 day ago
4 4
A paper published in The Lancet on January 21, 2021, describes the results of Covaxin’s phase 1 clinical trial. Muc… https://t.co/z3sw9SOBZt
1 day ago
13 27
Only a third of Indians surveyed said they wanted to get vaccinated right away. https://t.co/Fu0E4kFZJs
3 days ago
3
ICYMI: Washington formally left the Paris accord last year but its role as a heavyweight in global climate negotiat… https://t.co/zGdzcR9Gcf
3 days ago
If claim after claim fails to live up to the hype that surrounds it, scientists worry that the public will feel let… https://t.co/UYsFOXoPFq
3 days ago
3 3
Contact us