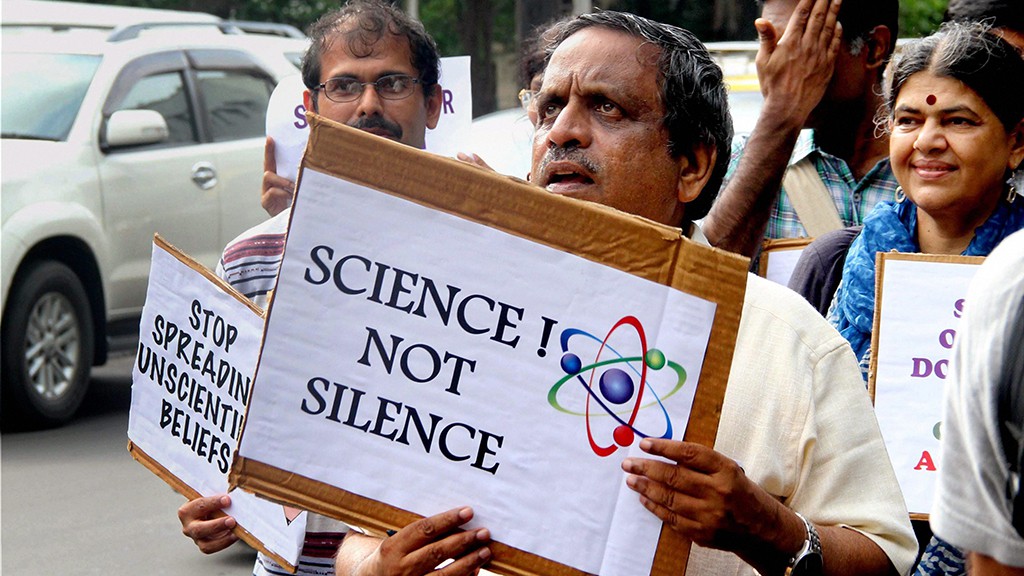 New Delhi: Indian scientists joined the second global ‘March for Science’ on April 14 this year. However, given the disconnect between the marchers and senior science ministry officials, there are no clear indications of how the government plans to respond formally to the marchers’ demands.

A section of the Indian scientific community had organised a ‘March for Science’ on August 9, 2017, after having missed the global march four months earlier. The Indian scientists had two key demands: raising the allocation for scientific and technological research to 3% of the gross domestic product (GDP) and hiking allocation for education to 6%. Apart from this, they asked the government to stop the “propagation of unscientific, obscurantist outdated ideas, and develop scientific temper”.

Undeterred by this, scientists joined the protest in the thousands this year, and coordinated their efforts with the global march.

“The scientific community had to take this unprecedented step,” a statement from the Breakthrough Science Society (BSS), which helped organise and coordinate the Indian marches in 2017 and 2018, said, “because there is an apprehension that science and scientific temper are being undermined, governmental support for education and for scientific research are being reduced, and governments are taking decisions without caring about scientific evidence or the opinion of the scientific community.” An estimated 14,000 marchers took to the streets this year.

The BSS also pointed out that, ahead of the announcement of the Union budget on February 1, scientists had submitted a petition with more than 2,000 signatures to the government, requesting an increase in the outlay for education, and for scientific and technological research. However, government officials “did not give any response”.

“Having expected an increase in the spending on education and science in the Budget 2018-19, we were deeply disappointed that the budget for these sectors has remained below 3% and 0.9% respectively of the country’s GDP,” the BSS organising committee said in a statement.

India’s Economic Survey this year had stated, “in 2015, there was a sizeable decline in R&D spending even as GDP per capita continued to rise. At its current rate, India would just barely reach GERD [gross domestic expenditure of research and development] of 1 percent of GDP by the time it was as rich as the US.”

Another bone of contention has been the bizarre claims and statements by ministers of the ruling party. Most recently, Satyapal Singh, the minister of state for human resource development, contested Charles Darwin’s theory of evolution, saying that “nobody [had] seen an ape turning into a man.”

So the members of the BSS’s organising committee wrote a letter to the government with the following words: “… we again come to the streets to make you take note of the problems facing science in India. We hope you will fulfil the just demands of the scientific community and science loving people at large.”

However, key officials in the government say they are yet to receive the memorandum. Many of them also view the funds issue differently. For example, Ashutosh Sharma, the secretary to the Department of Science and Technology (DST), said that the DST budget had in fact “doubled in the last four years”. He also pointed out that the allocation in absolute numbers had risen in tandem with India’s GDP.

According to him, “a committee of scientists decides on DST funding” and “certainly there is no funding [from DST] for pseudoscience” – in light of growing concerns about the government pushing research on the benefits of cow urine and dung.

K. VijayRaghavan, principal scientific advisor to the Government of India, had earlier said in an interview to Southword State that the Centre had taken note the march as well as “all feedback from Indian scientists on issues relating to science and society.”

However, VijayRaghavan cautioned that one ought not to reduce all issues to funding alone. “Simply increasing the outlay without any clear idea of what precisely the scientists plan to do with the hiked money will not solve problems,” he told The Wire, specifying that scientists will have to spell out how the resources will be used.

The Indian government is keen to take a lead in using science to solve societal problems specific to India, and also take the pole position in linking science to global sustainable development, he added.

Several scientists hope that senior science officials will address the two issues – and sooner. “National agencies will take their own time to assimilate the points and have their own administrative machinery that operates at its own pace,” Debrabrata Ghosh, professor of physiology at the All India Institute of Medical Sciences, New Delhi, and participant in the Delhi march, told The Wire. Ghosh is confident that the agencies “are registering the points” raised by marchers.

But more than funds, many are scientists are concerned about the spectre of prescience that is being raised with untested claims of discoveries in ancient India.

The highest turnout among states was in West Bengal, where over 6,000 people marched in Kolkata, Bahrampur, Balurghat, Siliguri and Coochbehar. About 2,000 marched in Thiruvananthapuram, Ernakulam, Kottayam, Alappuzha, Palghat, Thrissur, Malappuram, Kollam and Pathanamthitta, in Kerala.

Soumitro Banerjee, professor of physics at the Indian Institute of Science Education and Research, Kolkata, and general secretary of the BSS, said that there had been more marchers last year, 20,000 versus this year’s 14,000.

“The last year we were doing it for the first time, and we did not have a system of recording the numbers,” Banerjee said. “So when we collected the data, the local organisers gave rough estimates. This time we started a system where each participant had to sign a registration sheet. So we have a [better] idea about the numbers.”

He also said that in Karnataka in 2017, there had been marches in all district towns and more people took part as a result. But in 2018, the state organising committee decided to organise the march only in Bengaluru. “As a result, we missed [including] many [local people] who could have participated.”

‘A Disaster for the Basic Sciences’: KVPY Fellows React to the Scheme’s End

Review: A Much-Needed Book of Indian Scientists That Treads a Tricky Path