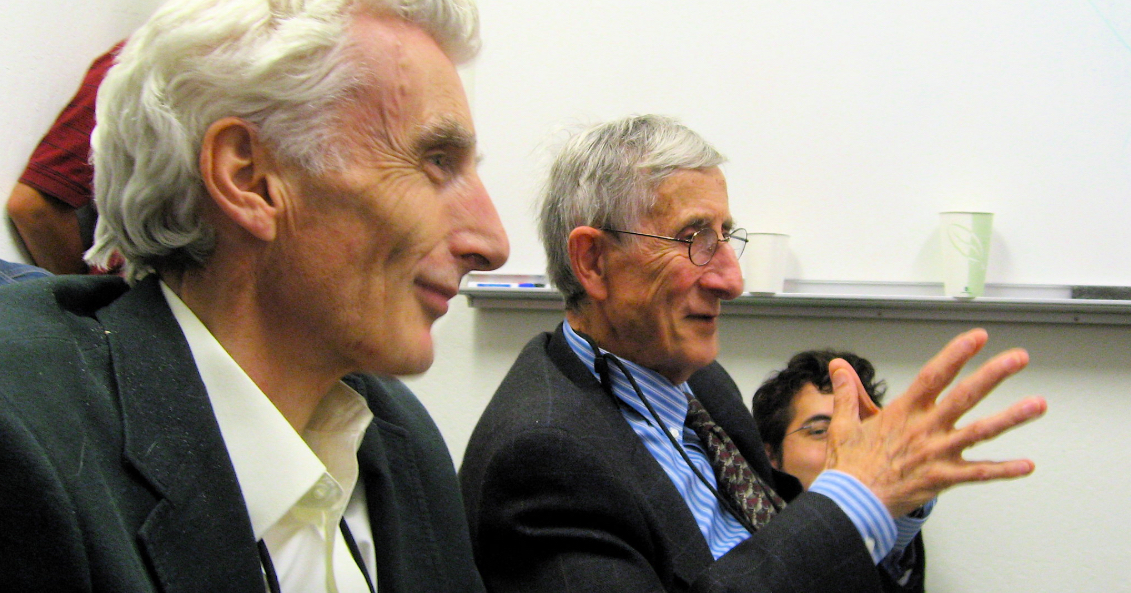 Freeman Dyson (right) in August 2007. Martin Rees is in the foreground. Photo: jurvetson/Flickr, CC BY 2.0

One of the most striking things about the American physicist Freeman Dyson was that he managed to stay relevant as a scientist and thinker for 70 years, a stunningly long period of time spanning not just the in 20th century but in the 21st too. When he died on February 28, according to his son due to complications from a fall, Dyson was 96 years old. He had lived through two world wars, made a significant contribution to the study of how matter and light interact, worked on space flight propulsion, advised the US government on nuclear weapons testing and arms control, popularised science and sought to reconcile science and religion.

Dyson spent most of his working life at the Institute for Advanced Study (IAS), Princeton. He made his biggest achievement as a physicist in 1949, when he was a doctoral student at Cornell University, publishing a paper proving that two competing ways to formulate quantum electrodynamics (QED), a field theory describing all behaviours of charged particles that is also compatible with the rules of special relativity, were mathematically compatible. In effect, Dyson unified two large pieces of an important part of particle physics, giving it the sort of theoretical foundation it needed to assert its validity as well as giving other physicists the mathematical tools to build on it with confidence.

The 1965 Nobel Prize for the development of QED excluded Dyson, however, and was awarded to the people who developed the pieces: Shin’ichirō Tomonaga and Julian Schwinger on the one hand and Richard Feynman on the other.

If this troubled Dyson, it didn’t show; indeed, anyone who knew him wouldn’t have expected differently. Dyson’s life, work, thought and writing is a testament to a philosophy of doing science (not of science itself) that has rapidly faded through the 20th century, although this was due to an unlikely combination of privileges. For one, in 1986, he said of PhDs, “I think it’s a thoroughly bad system, so it’s not quite accidental that I didn’t get one, but it was convenient.” But he also admitted it was easier for him to get by without a PhD.

His QED paper, together with a clutch of others in mathematical physics, gave him a free-pass to more than just dabble in a variety of other interests, not all of them related to theoretical physics and quite a few wandering into science fiction. Charles Simonyi called him a “free-thinker”. In 1951, he was offered a position to teach at Cornell even though he didn’t have a doctorate. The next year, J. Robert Oppenheimer invited him to IAS in Princeton, where he remained for the next four decades.

From within this cushy setting, Dyson worked on Project Orion, an ambitious plan to power starships using nuclear reactors. He protested the Partial Test Ban Treaty (PTBT) until around 1960 so it wouldn’t hinder Project Orion. But by 1962, he had changed his mind and even testified in Senate hearings, drawing on two documented experiences: his inability to find a moral distinction between his actions as an analyst in the Royal Air Force and those of Nazi war-criminal Adolf Eichmann, and his realisation at the war’s end that the rate of nuclear tests was growing exponentially.

The PTBT was eventually formalised in 1965 and banned atmospheric nuclear tests. This was around the time his involvement with the JASON advisory group increased, until he quit in 1968. In 1966, he and Andrew Lenard (working independently of another group) explained the particulate origins of the normal, or reaction, force of Newtonian mechanics. In 1973, he found a relationship between the Riemann zeta function and the atomic structure of heavy elements — two branches of study so disparate that a connection between them seems nearly magical.

In his worldview, being subversive, as an informed contrarian, was important. His peers however often found his commitment to this ideal exhausting and he himself was perhaps led astray as a result on at least one count. In the late 1970s he worked on problems in climate change, and continued to have views on the subject until at least the late 2000s, although by that time he had become a controversial figure. Dyson argued that climate models weren’t accounting for the non-deleterious effects of more carbon dioxide entering the atmosphere, such as higher agricultural yield, resulting in gloomier predictions. He also believed climate scientists didn’t understand Earth’s climate well enough to really understand how the consequences of global warming would evolve, and that governments were taking the problem more seriously than it deserved to be. His warning was obviously off the mark in hindsight.

His skepticism of climate models didn’t tarnish his reputation much nor did he become discredited as an intellectual for it. However, also around the late 1960s and when Dyson was in his mid-40s, science stopped being his primary occupation as he turned more towards contemplating the influence of technology on humanity and its future. He began writing regularly for the New York Review of Books, besides authoring a series of books expounding his humanist philosophies, often dwelling on genetic engineering, colonising space and ideas more recently collected under the umbrella term of technoptimism.

Consider this illustrative passage from Infinite in All Directions, a collection of lectures he delivered in 1985:

When life spreads out and diversifies in the universe, adapting itself to a spectrum of environments far wider than any one planet can encompass, the human species will one day find itself faced with the most momentous choice that we have had to make since the days when our ancestors came down from the trees in Africa and left their cousins the chimpanzees behind. We will have to choose, either to remain one species united by a common bodily shape as well as by a common history, or to let ourselves diversify as the other species of plants and animals will diversify. Shall we be forever one people, or shall we be a million intelligent species exploring diverse ways of living in a million different places across the galaxy? This is the great question which will soon be upon us.

“Fortunately,” he adds, “it is not the responsibility of this generation to answer it.” But if it had been, Dyson would have expected scientists at the table, both because they “have practical experience in operating a genuinely international enterprise” and because he took pride in the fact that scientists had raised their voices at an important hour “to teach mankind the hopeful lessons that we have learned from the practice of our trade”. The loss of Dyson’s voice certainly leaves the discussion just a little bit quieter, and harder.

Freeman Dyson was born on December 15, 1923 in Crowthorne, England, and died in Princeton on February 28, 2020. He is survived by his first wife Verena Dyson (née Huber), their two children, and his second wife Imme Dyson (née Jung) and their four children.