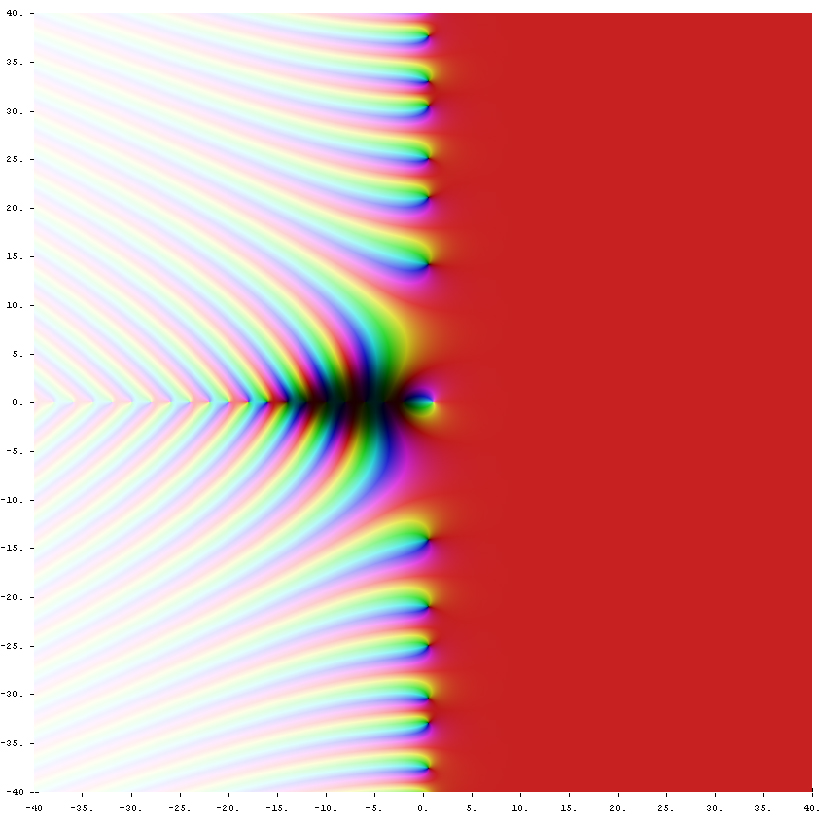 The Riemann hypothesis, which provides important information about the distribution of prime numbers, was first publicised in 1859. Its solution carries a $1-million reward.

A mathematics problem formulated over 150 years ago, and considered to be one of the most important unsolved problems to this day, may have inched closer to a solution with the publication of a new paper in the journal Physical Review Letters on March 30.

The paper’s authors are Carl Bender of the Washington University, Missouri; Dorje Brody, Brunel University, London; and Markus Müller, Western University, Ontario. They have taken on the Riemann hypothesis, which is one of the Clay Mathematics Institute’s seven Millennium Problems. Solving each one of these problems fetches the solver a cash reward of $1 million, not to mention international plaudits. The list was introduced in 2000.

The Riemann hypothesis is rooted in number theory and can be traced to the work of the Swiss mathematician Leonhard Euler, who laid its foundation in the 18th century. In 1859, Bernhard Riemann expanded on Euler’s work to develop a mathematical function that relates the behaviour of positive integers, prime numbers and imaginary numbers. Because of these connections, Riemann’s function shows up in multiple areas of mathematics, including analytic theory and cryptography.

As a result, proving or disproving the Riemann hypothesis is expected to have wide-ranging consequences for the practice of modern mathematics. Its historical significance and underlying complexity is the reason it is listed among the Millennium Problems.

If this pans out, it could give a route to proving the Riemann Hypothesis, the Holy Grail of math. Stay tuned. Not there yet, but maybe… https://t.co/XPvCDSG83m

The hypothesis is founded on a function called the Riemann zeta function. Before him, Euler had formulated a mathematical series called Z (s), such that:

He found that Z (2) – i.e., substituting 2 for s in the Z function – equalled π2/6, and Z (4) equalled π4/90. At the same time, for many other values of s, the series Z (s) would not converge at a finite value: the value of each term would keep building to larger and larger numbers, unto infinity. This was particularly true for all values of s less than or equal to 1.

Euler was also able to find a prime number connection. Though the denominators together constituted the series of positive integers, with a small tweak, Z (s) could be expressed using prime numbers alone as well:

This was Euler’s last contribution to the topic, and it brought a deeper connection between two kinds of numbers – positive integers and prime numbers – to the fore that meant a lot to mathematicians. As Thomas Wright, a number theorist at Wofford University, South Carolina, has written, “It means that if we want to think about questions related to prime numbers, we can use this Z (s) to translate them to questions about regular old positive integers, which are much easier to deal with.”

Prime numbers are used in a variety of contexts today. Mathematicians studying the different ways in which numbers can be connected to each other are fascinated by them because, for example, they don’t know the pattern in which these numbers occur. Interest in this problem was kicked off by the mathematician Carl Gauss, who wanted to know if there was a simple way to find the number of prime numbers between any two numbers. For example, how many prime numbers are there between 100 and 1,000?

You could count them off one by one, you could write an algorithm for it… or you could wait for Riemann to come up with his famous hypothesis.

So – in the late 1850s, Riemann picked up where Euler left off. And he was bothered by the behaviour of the series of additions in Z (s) when the value of s dropped below 1.

In an attempt to make it less awkward (nobody likes infinities), he tried to modify it such that Z (2) and Z (4), etc., would still converge to interesting values like π2/6 and π4/90, etc. – but while Z (s ≤ 1) wouldn’t run away towards infinity. He succeeded in finding such a function but it was far more complex than Z (s). This function is called the Riemann zeta (ζ) function: ζ (s). And it has some weird properties of its own.

(i is the imaginary number represented as the square-root of -1.) Obviously, Riemann was prompted to ask another question – the question that has since been found to be extremely difficult to answer, a question worth $1 million. He asked: Do all values of s that are non-negative integers and for which ζ (s) = 0 take the form ‘(1/2) + a real number multiplied by i‘?

In more mathematical terms: “The Riemann hypothesis states that the nontrivial zeros of ζ (s) lie on the line Re (s) = 1/2.”

So if Bender, Brody and Müller have really moved closer to proving that the value of s will always take the form ‘(1/2) + a real number multiplied by i‘, then they will have produced a long-awaited turn of the wheel in an almost 160-year-old problem. And the million dollars awaiting them, or anyone else, at the end of their efforts will likely be the least of their rewards.

Resolving the Riemann hypothesis allows mathematicians to get a better hold of the prime numbers distribution problem. Around 1794, Gauss had asked the question about the number of prime numbers in a given range. As it happened, he had found an approximate solution using calculus called the prime number theorem (PNT). But he wasn’t satisfied with it.

Once Riemann had begun working on Euler’s problems, however, mathematicians realised that the zeta function held an important clue. They found that the approximate number of primes between two numbers calculated using the PNT couldn’t be off the mark by more than a certain value (depending on the range) if the Riemann hypothesis was true. This is a significant relationship between two branches of mathematics. Commentators have frequently remarked that any changes in this relationship could affect modern cryptography because of the latter’s reliance on prime numbers.

In 1977, two computer scientists and a mathematician devised an encryption technique called RSA. An important element of the encryption involves multiplying two randomly chosen prime numbers to generate a very large number. But given a very large such number, computers take a tremendous amount of computing power to determine what its prime factors could be in a reasonable amount of time.

RSA’s usefulness and security will not be affected if the Riemann hypothesis is found to be true. In fact, multiple computer-powered studies in the last few decades have shown that the hypothesis is likely true because the data says so. Subsequently, security experts have been building defensive algorithms assuming that the hypothesis is true. Instead, the real problem for RSA and others like it – if any – could arise from the techniques used to resolve the Riemann hypothesis. These techniques might be able to elucidate a connection between different prime numbers that could be exploited by attackers.

Even so, this is a limited view of what will come once the Riemann hypothesis is laid to rest. As Ragib Zaman, a PhD student at the University of Sydney, wrote on Stack Exchange in 2011: “Most mathematicians don’t want to see [the hypothesis] resolved just for a yes/no answer. It is more important that research into the problem produces new mathematics and deep insights. … The situation is similar to the development of algebraic number theory with the goal of understanding higher reciprocity laws. Along the way a whole new interesting subject opened up spawning many decades of interesting mathematics…”

Cracking Riemann’s question has taken similar paths, cutting through diverse areas of mathematics and physics. The authors of the Physical Review Letters paper have used a branch of mathematics that is commonly used to solve problems in quantum mechanics. But while the mathematics community is excited, and the authors of the paper have themselves noted that their work offers an “optimistic outlook”, they also recognise that some difficult and open problems lie ahead.

In November 2015, a Nigerian academician named Opeyemi Enoch claimed to have cracked the hypothesis, but it was soon discredited. The only Millennium Problem solved till date has been the Poincare conjecture, by the reclusive Russian mathematician Grigori Perelman in 2003. In fact, the resolution of another problem on the list is expected to have bigger implications for cryptography than the Riemann hypothesis: the P versus NP problem.

Note: This article earlier stated that the expression of Z (s) using prime numbers had the addition operator between terms. It is actually multiplication. The mistake was corrected on April 4, 2017. On April 7, a press officer from Brunel University clarified that Dorje Brody had moved there from Imperial College.

The Wire Science@TheWireScience
3 Following 11.7K Followers
The Government of India is stuck between the devil and the deep sea, and may even have to brace for a surge in its… https://t.co/uvfws3aEUJ
8 hours ago
1
There is one group of scientists that's used to thinking of more than six impossible things before breakfast: the c… https://t.co/EpuSl7gqVT
8 hours ago
Monsoon rains are likely to enter India through the southern coast around June 1, the state-run weather office said… https://t.co/XHirp7iJqg
9 hours ago
3
India continues to report around 6,500 new cases of the coronavirus infection a day. According to the health minist… https://t.co/73pQgC7vle
10 hours ago
2
The KGB said “the goal of the measures is to create favourable opinion for us abroad — namely, that this disease is… https://t.co/HjcmKLdE8R
12 hours ago
2 4
The countdown, made especially suspenseful by shifting weather conditions, was halted just 16 minutes and 54 second… https://t.co/P7bdeq7MQl
13 hours ago
2 1
Many products already in the market, such as medicinal drinks and food products, often accompanied with vague reass… https://t.co/MmzSCfuszb
14 hours ago
2 5
The presence of visiting dignitaries, including President Donald Trump, added to the high-pressure mood at Kennedy… https://t.co/URoiXMMYqj
2 days ago
12 59
Human spaceflight is progressing at a rapid pace across the globe. This decade is full of milestones to look forwar… https://t.co/Klg0GEbTN3
2 days ago
13 44
Alert: @SpaceX will launch two NASA astronauts onboard a Falcon 9 rocket at 2:03 AM IST, May 28 (in a few hours). A… https://t.co/FtLqlpKhvc
2 days ago
10 31
"In India, it seems to me that the government thinks to admit community transmission is to admit failure of all its… https://t.co/OCwhINhLlu
2 days ago
2 7
[Archives] When rationalists are murdered and those who oppose archaic Hindu traditions fear for their safety, it's… https://t.co/qlfpsAZWfc
2 days ago
4 2
The story of how footage of a Stanford professor ended up in a film about the virus is one example of how the views… https://t.co/NWW2ctP3PU
2 days ago
1
Glenmark will begin a new clinical trial to test a combination of anti-viral drugs favipiravir and umifenovir as a… https://t.co/dYy2urJPHo
2 days ago
2 15
Researchers conducted a study the Western Ghats, a biodiversity hotspot. They compared carbon storage and rates of… https://t.co/cTlHMGGyAd
3 days ago
1 3
Contact us

The Exoplanet That Changed How We See the Solar System, and the Universe