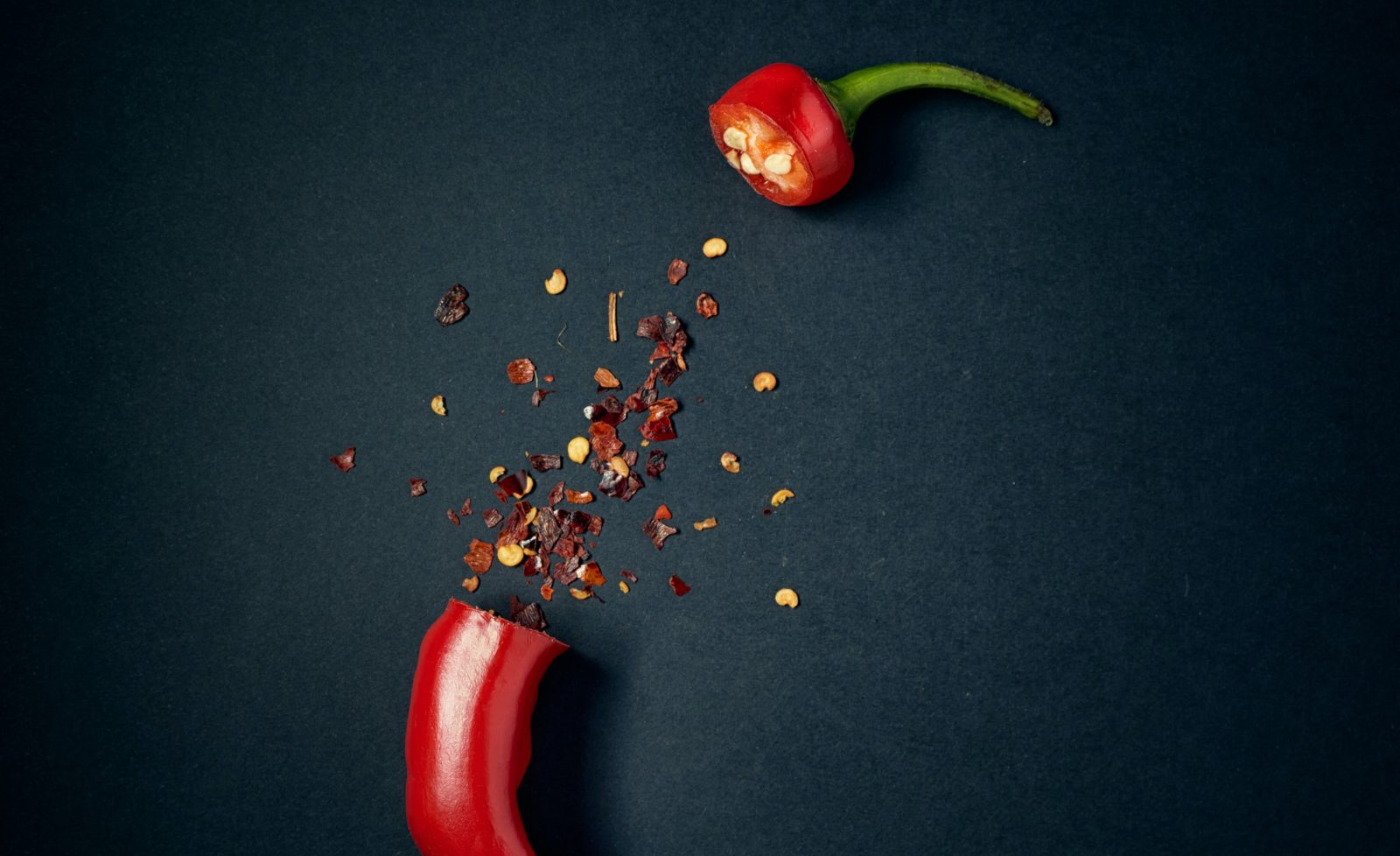 The Nobel Prize for physiology or medicine for 2021 has been awarded to David Julius and Ardem Patapoutian for discovering the receptors in the human body responsible for our ability to feel heat and cold.

Central to the discovery of how we sense temperature is a chemical compound called capsaicin. Its technical designation is 8-methyl-N-vanillyl-6-nonenamide. It looks like this:

The vertices and tips are carbon atoms, a single edge is a single bond and a double edge (the parallel lines) is a double bond. Capsaicin belongs to the vanilloid type of compounds. These compounds have a vanillyl group – the ringed structure on the left plus the OH and O–C ends. Many vanilloids, including capsaicin, bind to a receptor in the body called TRPV1.

It is somewhat common knowledge these days that the first step of the novel coronavirus hijacking a cell in the human body is to bind to a receptor on the cell’s surface, called ACE2. Not all cells express the ACE2 receptor on their surface, but those cells lining the human respiratory tract do. Similarly, capsaicin binds to a receptor called TRPV1, which is expressed by cells of the central nervous system. And once it does, it triggers a severe burning sensation.

The Nobel Foundation has credited David Julius with discovering that TRPV1 is the receptor – encoded by the TRPV1 gene (gene names are italicised by convention) – responsible for our bodies being able to sense acidity and heat, especially noxious heat, i.e. a temperature that could damage tissue. This also means these receptors are involved in our body’s ability to regulate its acidity and temperature levels.

Julius, and others, did this by studying capsaicin’s effects on the body. All cells in the body have proteins called ion channels. These proteins are porous, and produce small electric fields that allow some ions to pass through their pores and in quantities determined by the cells’ needs. According to the Nobel Prize website, Julius discovered that the receptor to which capsaicin binds is TRPV1 (which is an ion-channel-type receptor). Once it binds, TRPV1 allows positively charged ions, especially those of calcium, to pass through, producing an electric signal that travels through the nervous system to the brain.

Capsaicin doesn’t actually burn or damage tissue. Its contact with TRPV1 simply prompts the brain to react as if the tissue is being burnt. Of course, this will be of little solace the next time you inadvertently bite into a chilli.

But this doesn’t mean capsaicin is harmless either. The burning sensation is still a real sensation, and India has some dubious connections with capsaicin that highlight this truth, which is unfortunate.

In 2014, the then Member of Parliament from Seemandhra, L. Rajagopal, was quite opposed to the bifurcation of Andhra Pradesh, which had yet to occur. But hours after the Lok Sabha passed the controversial Bill, Rajagopal stood up in Parliament and released ‘pepper spray’ from a canister into the room, triggering a commotion and forcing his fellow lawmakers to scramble outside. The then Lok Sabha speaker Meira Kumar called the incident a “blot” on democracy.

Rajagopal’s canister didn’t contain pepper, or even chilli, powder. Instead, it held capsaicin that had been converted into a resin, emulsified with water and pressurised into the can. In 2014, Mohan Kameswaran, a senior ENT surgeon in Chennai, had told this correspondent that “the spray contains an irritant that doesn’t burn but causes a reaction like a burn”. It can’t be washed away with water either. Kameswaran also said that “in people with conditions like asthma or allergic conjunctivitis, [capsaicin exposure] could worsen the conditions and make them critical.”

Another way capsaicin hurts is by causing the brain to respond for too long to its effects, eventually desensitising TRPV1 to the presence of capsaicin. At this point, the ion channel closes and the body begins to stop being able to feel noxious pain. Since pain is often a signal to the body that it is doing something it shouldn’t be, it is easy to see how being unable to feel pain could be dangerous.

Capsaicin is available in significant quantities in fruits of plants of the genus Capsicum. These fruits include chillies. The spiciness of chillies is measured by Scoville heat units (SHUs). The modern way to measure the SHU of a chilli variety is to directly determine its capsaicin content (it helps that capsaicin glows in the dark). Pure capsaicin has an SHU of 16 million.

Famously, in 2007, a chilli called ghost pepper, a.k.a. ‘Naga chilli’, from Northeast India became the hottest known variety at the time: it had an SHU in excess of 1 million. Such varieties are called ‘super-hots’, and ghost pepper was among the first to be found. And in 2015, scientists from the US reported something unique about them. As Kendra Pierre-Louis wrote for The Atlantic: “Conventional wisdom holds that a pepper’s power is concentrated in the placenta – the central core of the fruit that contains the seeds, otherwise known as the pith – and the thick veins that attach the placenta to the pepper wall. Removing the seeds, then, usually results in removing the placenta and veins, thus cooling the fruit’s heat.” But the scientists found that ‘super-hots’ also contained capsaicin in their fleshy parts.

The ghost pepper was of course a non-violent connection between India and capsaicin, but the Indian military establishment saw differently.

Specifically, it saw an opportunity. In 2010, Col. R. Kalia told Associated Press that scientists at the Defence Research and Development Organisation had found a way to pack capsaicin into grenades. When tossed, these grenades would release the substance into the air and disperse rioters or flush out terrorists, as the case may be.

In 2016, after Indian security forces killed militant leader Burhan Wani in Anantnag, unrest erupted around the Kashmir Valley. The security forces responded, among other ways, by shooting protestors with pellet guns, wounding and maiming thousands for life. The use of these sub-lethal weapons came under criticism.

In response, Lt. Gen. D.S. Hooda said a committee appointed by the Centre to look into alternatives was also considering the ghost-pepper powered ‘chilli grenades’. The committee subsequently recommended the use of grenades loaded with a substance called nonivamide, technically pelargonic acid vanillylamide (PAVA; note the ‘vanillyl’). Research has shown that though both capsaicin and PAVA are naturally occurring capsaicinoids capable of ‘activating’ the TRPV1 receptor, PAVA could be less potent – but still more painful than CS gas, the principal component of tear gas.

Official bean counters are always asking “what is the use” of research. Nothing makes a scientist happier than for her discovery to be useful to people. But sometimes science also becomes complicit in the ill-treatment of human beings.