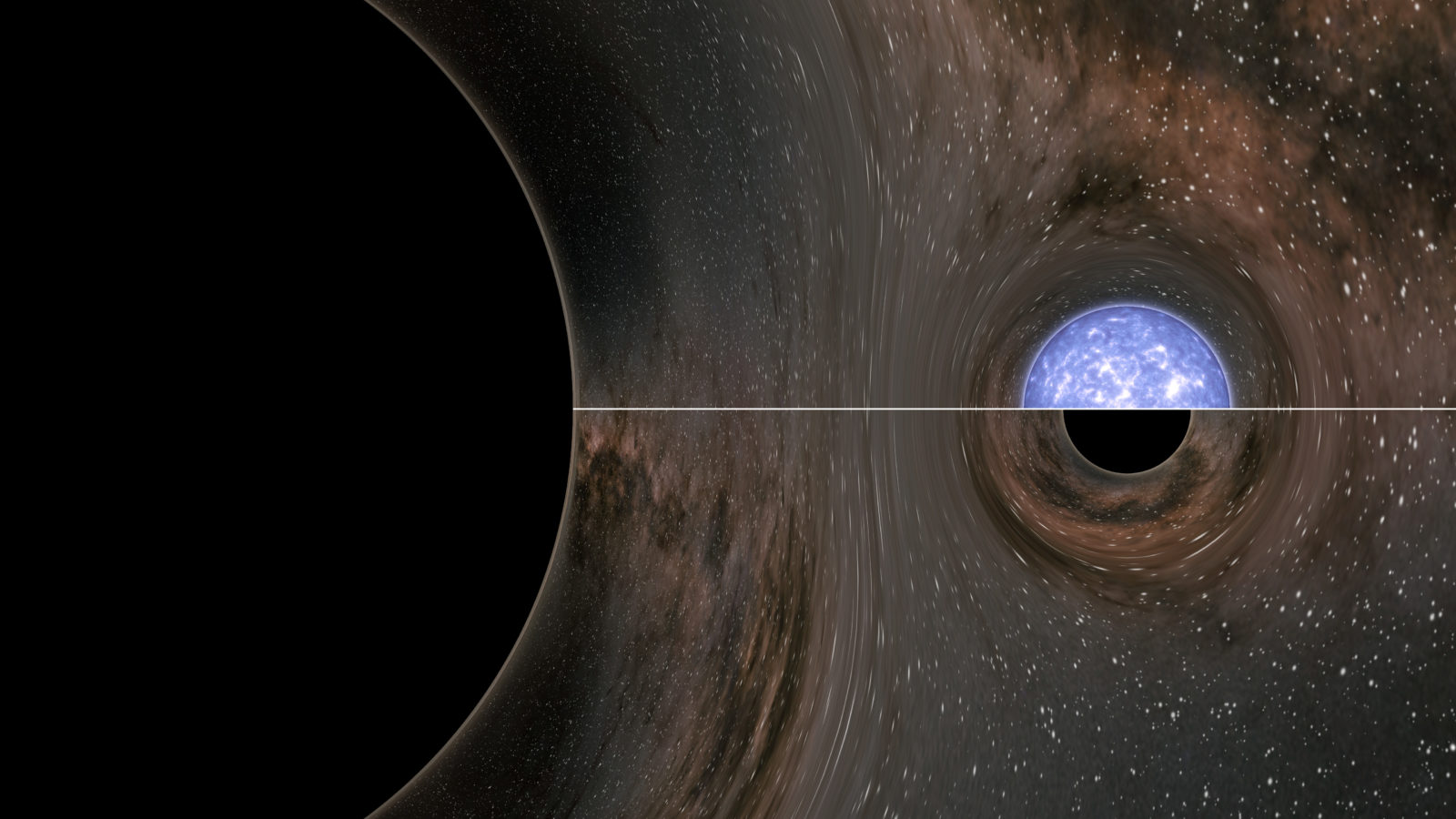 Featured image: An artist’s depiction of GW190814 moments before the merger. Image: LIGO/Virgo.

In the early hours of August 15, 2019, as most of India slept in anticipation of a national holiday and the usual Independence Day celebrations the following morning, three gravitational wave detectors in the US and Italy observed one of the strangest signals to date.

The twin Advanced LIGO detectors in the US and the Virgo detector in Italy are the most precise measuring devices ever built. They can sense extremely tiny disturbances in the fabric of spacetime called gravitational waves, created when massive bodies like two black holes or neutron stars rapidly spiral in and merge.

Since the first detection of a binary black hole merger in September 2015, which signalled the start of a new era of astronomy, the LIGO-Virgo collaboration has reported the observation of multiple binary black hole and binary neutron star mergers.

But the Independence Day signal, whose details the collaboration announced today, was exceptional.

Officially designated GW190814, this signal originated about 800 million years ago – or 800 million lightyears away – from the inspiral and merger of two compact objects. The heavier of these objects was a black hole of 23 solar masses (i.e. 23-times as massive as the Sun), while its companion had a mass of 2.6 solar masses. The gravitational waves from this event travelled at the speed of light and passed through Earth on August 15, 2019, at around 2:40 am IST. And it immediately stood out from all previous LIGO-Virgo detections because of two outstanding features.

First, with the heavier object weighing nine times more than its companion, this is the most asymmetric system ever observed using gravitational waves.

Second, the lighter object of 2.6 solar masses is either the lightest black hole or the heaviest neutron star ever observed in a system of two compact objects. And we’re not sure which one it is.

(Editor’s note: The author was part of the five-member editorial team set up to write the discovery paper and is a member of the LIGO Scientific Collaboration.)

Astronomers have long had a hard time explaining why they haven’t been able to find black holes lighter than 5 solar masses. At the same time, current theoretical models about the internal structures of neutron stars predict that their maximum allowed mass should be around 2 solar masses.

The difference between these two limits has created the idea of a ‘mass gap’ – a region in the population of objects that were once stars, like black holes and neutron stars, a.k.a. the stellar graveyard, devoid of objects within 2 to 5 solar masses.

GW190814 marks the first time astronomers have made a confident mass measurement of a compact object in the mass gap. This however brings us no closer to reducing the ambiguity about its nature. The presence of a neutron star in a binary should leave a unique signature on the gravitational wave signal, as the neutron star is deformed by the gravitational pull of its companion black hole – like how the Sun and the Moon raise tides on Earth.

However, for a system where the masses of the two objects are as different as astrophysicists have found to be in GW190814, this tidal imprint is exceedingly small, and therefore exceedingly difficult to measure. On the other hand, if indeed the lighter object is a neutron star, astrophysicists will have to revise their current understanding of neutron star physics.

It seems more likely that the companion is an unusually light black hole instead.

The significantly different masses of the two companions also challenge the existing understanding of how such systems are formed. With GW190814, we seem to have uncovered a new sub-population of compact binary mergers. Such systems are expected to form much less frequently than a system with two black holes or two neutron stars. But when they do form, they are most likely to originate in young, dense star clusters and in active galactic nuclei (galaxies with unusually energetic activity at their centres). It’s also possible that the lighter object itself is the product of a merger of two even smaller compact objects.

Either way, GW190814 will lead us to reexamine current compact-object formation models.

Einstein, Hubble and the universe

Finally, GW190814 has allowed us to test several predictions of Albert Einstein’s theory of general relativity, including the multipolar structure of gravitational radiation.

When you pluck a guitar string, the sound produced is dominated by the frequency of the plucked note. But the overall sound is enriched by the presence of its overtones, leading to a colourful acoustic experience. Similarly, a gravitational wave signal contains signatures of overtones, or higher harmonics, of its fundamental frequency – especially if the two inspiralling objects have different masses.

Since GW190814 is mass-wise the most asymmetric detection till date, we found much stronger evidence for the presence of higher harmonics, or higher multipoles of gravitational radiation, in the underlying signal. This is a wonderful validation of the theory of general relativity.

This is an audio file illustrating the effect of higher multipoles for signals similar to GW190814. The file simulates a binary of mass ratio of about 9:1, like GW190814, but the frequencies are 15-times higher for better audibility. (Credit: Florian Wicke and Frank Ohme, AEI Hannover, Germany)

Given the ongoing disagreement and debate in the cosmology community over different measurements of how fast the universe is expanding, a.k.a. the Hubble constant controversy, gravitational waves provide us with an independent way to measure this rate. It is characterised by a number called the Hubble constant.

The LIGO and Virgo detectors localised GW190814 to a tiny area in the sky of about 20 sq. degrees, making it the second-best localised source in the sky (after the first binary neutron star merger, GW170817). However, unlike GW170817, we don’t have information about GW190814 from the electromagnetic spectrum. That is, astronomers haven’t spotted any electromagnetic radiation coming from GW190814, making it a ‘dark siren’.

As a result, we have measured the current value1 of the Hubble constant to be about 75 km per second per megaparsec. This is the most precise measurement to date, despite large uncertainties in the measurement, for a gravitational wave source without an electromagnetic counterpart.

Various research institutes in India are part of the LIGO Science Collaboration, and researchers at many of them contributed to the analysis of different aspects of GW190814.

Scientists at IIT Gandhinagar and the Chennai Mathematical Institute teamed up to help confirm the strong signature of higher harmonics in the signal. Researchers at the International Centre for Theoretical Sciences, Bengaluru, helped confirm that the observed signal was consistent with predictions of the theory of general relativity.

Several members of the Indian community have also made more long-standing contributions that the LIGO-Virgo collaboration has used to model gravitational wave signals and analyse the data.

GW190814 is a treasure trove of rich physics that also raises several fascinating questions about the nature and properties of black holes and neutron stars, and the processes that lead to their merger.

As the LIGO-Virgo detectors become more sensitive and new detectors in Japan and India (LIGO-India) join the global detector network in the coming years, GW190814 will likely be the first of many detections that could help us make more sense of systems with unequal masses, and push the boundaries of astrophysics and cosmology.

Abhirup Ghosh is a junior scientist and a member of the Astrophysical and Cosmology Relativity group at the Max Planck Institute for Gravitational Physics (Albert Einstein Institute), Potsdam, Germany.