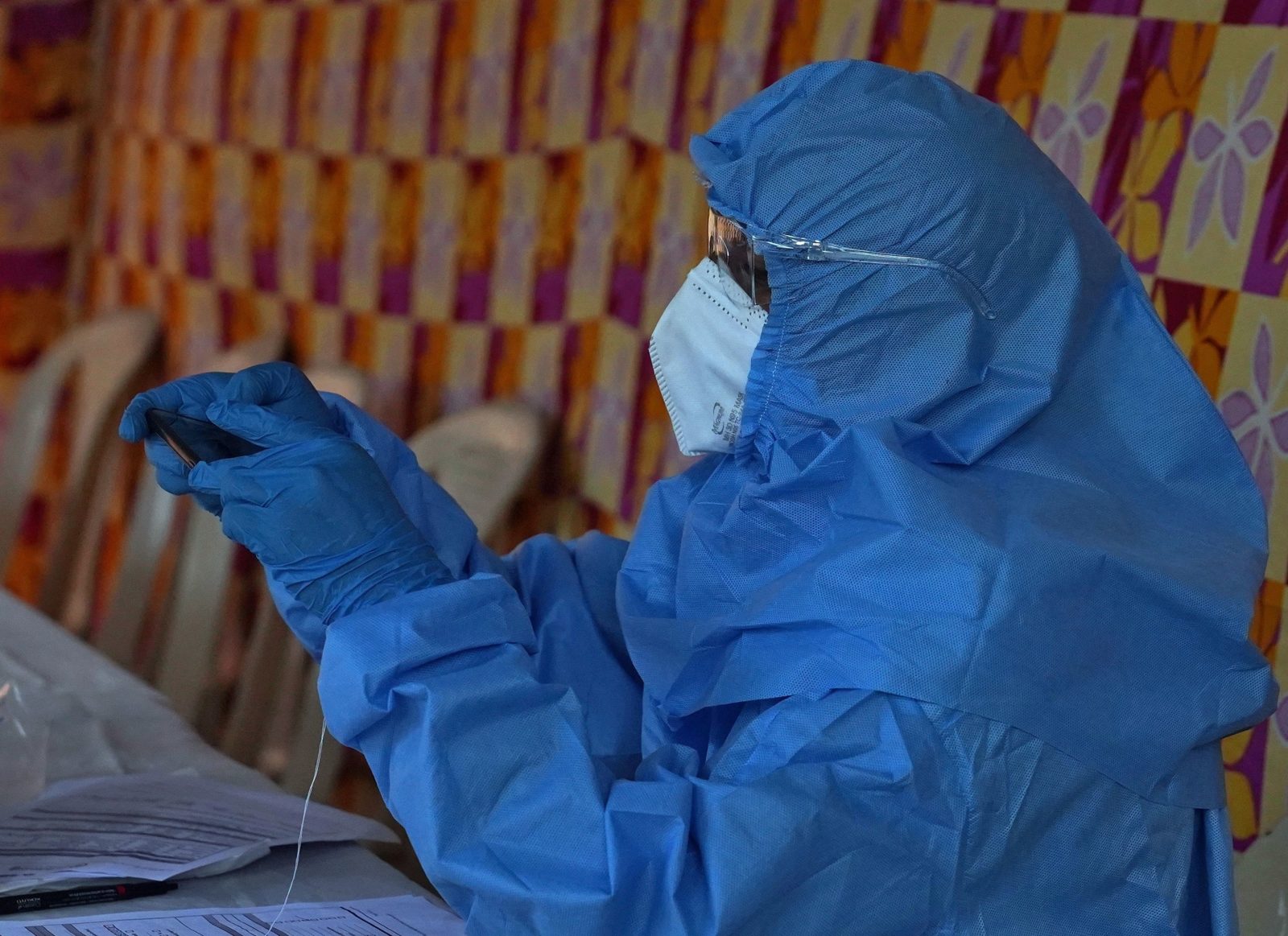 Over Half of People in Mumbai’s Slums Probably Infected With Coronavirus: Survey

A health worker in PPE uses his mobile phone to record details of residents during a COVID-19 check-up campaign in Mumbai, July 22, 2020. Photo: Reuters/Hemanshi Kamani.

Bengaluru: Recent reports of the rapid antigen tests for COVID-19 having 60-65% false negatives in Mumbai have alarmed many – but didn’t surprise experts.

On July 24, the city’s Brihanmumbai Municipal Corporation (BMC) launched ‘Mission Universal Testing’, a programme through which the civic body aims to test every person in Mumbai for the novel coronavirus. Pursuant to this goal, it plans to purchase one lakh antigen testing kits that will be made available in private hospital and labs as well, according to India Today.

The antibody test can’t detect COVID-19 in its early stages as the body develops antibodies only one to three weeks after an infected person has shown symptoms – so it is used to detect a past infection. This is the type of tests the BMC used for its recently concluded seroprevalence survey, which indicated that nearly 7 million of Mumbai’s residents, and over half of all residents of the city’s slums, could have already had COVID-19.

On the other hand, the RT-PCR and antigen tests are used to test whether an individual is currently infected. The RT-PCR test is more accurate and more time-consuming, infrastructure-intensive and requires trained personnel. The antigen test is less accurate, yields results in 15-30 minutes and can be performed at the site where the sample is collected instead of shipping samples to a lab.

These advantages render antigen tests an attractive candidate from the point of view of speed – but speed isn’t the only concern. Part of the picture here is that the novel coronavirus spreads very fast, which has three implications.

First, a test must also screen people effectively, perhaps even at the expense of returning a few false-positive results. This way, according to Tinku Thomas, a professor and head of the department of biostatistics at St John’s Research Institute, Bengaluru, a test can pick up “at least almost all the positives” for isolation and/or treatment, and these people can be rechecked later with RT-PCR tests to make sure.

The second consequence is related to public health and awareness. A test that quickly tests people at the expense of taking more time to yield more accurate results could also yield more than a few false negative results. That is, infected people who test ‘negative’ may be led to believe they’re not actually in infected and become complacent, and not be so careful about wearing masks when stepping out, washing their hands whenever possible and/or taking extra precautions when meeting people with comorbidities.

Third, we must finally add the virus’s prevalence in a given population.

Understanding how all these factors come together requires some simple math.

Also read: What Are Sensitivity and Specificity? A Handy Reference

The measure of how many true positives a test kit detects from among all the infected individuals is called its sensitivity. This number defines how sensitive a test is to the presence of the virus in an infected person. For example, if a test claims 90% sensitivity, the kit will be able to find 90 out of 100 actually infected people to be ‘positive’. The remaining 10 will falsely test negative. The lower a test’s sensitivity, the more false negative results it will return.

The measure of how many true negatives a test kit detects from among healthy individuals is called its specificity. This number defines how specifically the test can find a healthy person to be ‘negative’. If the test claims 95% specificity, it means the kit will be able to find 95 out of 100 healthy people to be ‘negative’. The other five would be missed out as false positives. The lower a test’s specificity, the more false positive results it will return.

While RT-PCR and antibody tests are over 70% and 90% sensitive, respectively, the sensitivity of a rapid antigen test kit is about 50%. As on July 23, 2020, the Indian Council of Medical Research (ICMR) had approved three rapid antigen test kits for use in India. The details of two of them are as follows (those of the third, COVID-19 Antigen Lateral Test Device, aren’t available in the public domain):

Thomas said the number of false negatives can be high even when the specificity is a 100% because “false negatives are actually positive cases that are not getting picked up by the test, due to low sensitivity.”

Rahul Siddharthan, a professor of computational biology at the Institute of Mathematical Sciences, Chennai, elaborated on this possibility: “One can have a high specificity, where most of what is detected as ‘negative’ is indeed ‘negative’, while also having a high false negative rate. If 50 out of 100 of your samples are actually positive, and you predict ‘negative’ for all of them, your true negative rate is 100% – i.e., you have 50 true negative and no false positive predictions. But your false negative rate is also 100%. Your sensitivity … is zero in this case.”

On July 23, India Today quoted a doctor in its report as saying the rapid antigen test kits used in Mumbai’s seroprevalence survey were 50% sensitive. So the false negative rate – the chances of a true positive case being missed – is also 50%. “I would say a reported 60-65% false negative rate is not very far off from a claimed 50% sensitivity,” Siddharthan said.

The COVID-19 Ag Respi-Strip, developed by the Belgium-based company Coris Bioconcept, has sensitivity as low as 30.2%. So a false negative rate of close to 70% is possible.

Then there is also human error – that enough virus particles weren’t collected in the swab for the test to detect an infection. This could contribute to false negatives as well.

If we performed a rapid antigen test in a municipal ward with 100,000 residents, of which 10,000 are infected, using a kit that has 50.6% sensitivity and 99.3% specificity, we would miss 4,940 people who are actually infected as false negatives.

This is because, of the 10,000 people that are actually infected, the test is sensitive enough to find only 5,060 (i.e. 50.6%) to be ‘positive’. The remaining 4,940 (i.e. 49.4%) that are infected will incorrectly test ‘negative’. This outcome risks the people who falsely tested ‘negative’ – especially if they were asymptomatic and/or whom contact-tracing efforts missed – believing they don’t have the virus and lowering their guard when interacting with other people. So it becomes critical to confirm whether they are truly ‘negative’ or falsely ‘negative’ using a more sensitive test.

According to ICMR’s guidelines, all those who may have falsely tested negative with a rapid antigen test are to be retested with an RT-PCR test. Many experts have said this is an inefficient strategy, considering the fact that COVID-19 is bound to have a low prevalence in India’s vast population, so the chances of a large number of test results being false negatives are high. “One might as well conduct the RT-PCR tests for all,” Thomas said. “Adding on the burden of retesting false negatives is not economical.”

The Wire Science@TheWireScience
4 Following 27.5K Followers
Why and how respiratory diseases can develop into chronic conditions like long COVID-19 are still unclear. |… https://t.co/uv0C0CRB5D
15 hours ago
2 5
As of August 8, more than 4,000 cattle have died in India due to a viral disease – the lumpy skin disease. The dise… https://t.co/8PDleksTaU
17 hours ago
2
The immune system facilitates lung recovery after an infection by sending signals that can activate stem cells but… https://t.co/9zuUlFpJDs
20 hours ago
3
To solve the problem of transboundary air pollution, developed economies could provide green technologies to countr… https://t.co/JFmAeF7DYr
22 hours ago
2
Many autistic people experience difficulties in expressing their emotions. This can result in increased anxiety, de… https://t.co/zOWaNVlx21
24 hours ago
1 4
Every country deserves an equal opportunity to develop, but it is also a universal human right to breathe clean air… https://t.co/j9quH4cg0o
2 days ago
2
New research found that it might not be an active viral infection causing long COVID-19 and similar conditions, but… https://t.co/1uraoT5g3w
2 days ago
1 2
While US politicians have taken to describing rising food and other commodity costs as the “Putin price hike,” some… https://t.co/Y0CSDLZOoN
2 days ago
Monkeypox may not be a second COVID-19, but governments and public health officials are not reacting swiftly enough… https://t.co/P8WcQcRjh7
2 days ago
1
The UN projects that global demand for meat will swell by 15% by 2031 as the world's increasing population seeks mo… https://t.co/tTHtGt7iOU
3 days ago
1
Despite their lack of dietary energy, consuming non-nutritive sweeteners may be linked with type 2 diabetes and hea… https://t.co/O4u4z4Ib5M
3 days ago
While scientists agree with the move to normalise taxes across different sectors, they say current and upcoming gra… https://t.co/Ddl6Pvwq04
3 days ago
4
Virologist Gagandeep Kang said that with the case trajectory likely to go up, more laboratories need to be equipped… https://t.co/SSapRJIM8z
3 days ago
2
To evaluate how dangerous a novel disease can be, three factors are important: virulence (deadliness), transmission… https://t.co/OsDBUqzqKp
4 days ago
3 4
A YouTuber in the AI community trained an AI language model called "GPT-4chan" to give misogynistic responses to qu… https://t.co/G8IIOTutYj
4 days ago
Contact us