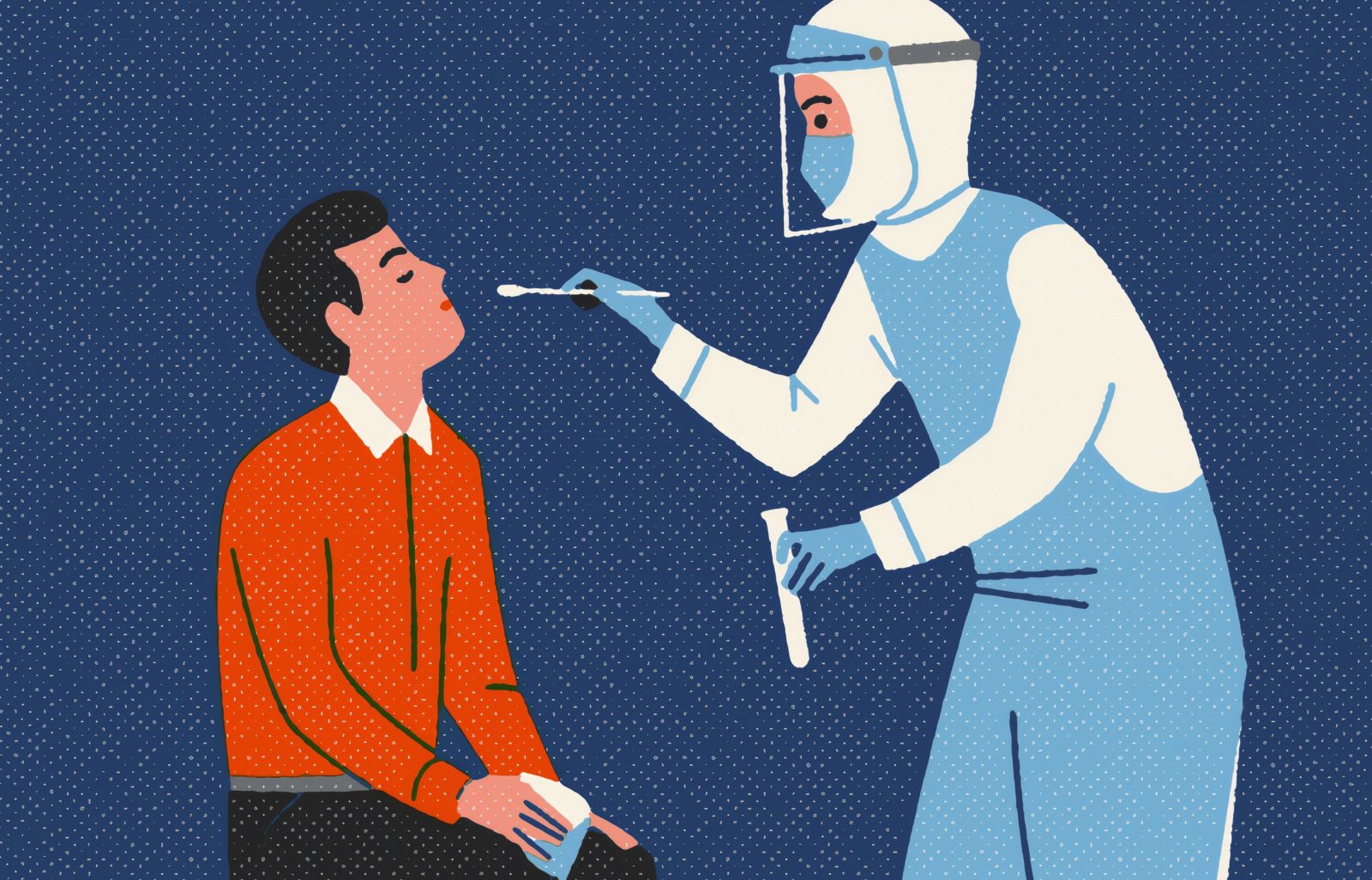 India COVID-19: How Many Tests Are Enough Tests?

An artist’s impression of a swab test. Image: United Nations/Unsplash.

Bengaluru: Several experts have raised questions about a new advisory on the use of a rapid diagnostic test to scale up COVID-19 testing in India. The Indian Council of Medical Research (ICMR) issued the advisory on June 14 and called for health workers to use an antigen-based test manufactured by South Korean firm SD Biosensor in both containment zones and in hospitals outside containment zones. But experts say key sections of the guidelines are unreasonable.

The test, by a detection kit called Standard Q COVID-19 Ag, works by detecting a protein on the surface of the novel coronavirus that triggers an immune response in the body. Such proteins are known as antigens. It’s a point-of-care test, which means it can be performed outside a lab, and supposedly yields results within 15-30 minutes. The RT-PCR test, which is the most reliable diagnostic test currently available, can take up to a day to yield results, and requires transporting samples to a lab and complex infrastructure to be completed.

Cities like Delhi have been restricting RT-PCR testing, causing hospitals to turn away patients with non-COVID-19 ailments because they fear such patients could transmit infections to healthcare workers and fellow patients if they are hospitalised or undergoing surgery. So a quicker and easier test can save lives by allowing doctors to take decisions about how to treat patients and what precautions to take.

ICMR said in its advisory that it had evaluated the antigen kit’s performance in two labs, and found its sensitivity to be 50.6% and 84%, and specificity 99.3% and 100%, respectively. Given the high specificity, the council said, the kit could be used in two scenarios. The first is to diagnose people with influenza-like illnesses and asymptomatic contacts of patients in COVID-19 containment zones – areas with clusters of cases where testing is typically intensified. The second scenario is for the diagnosis of both symptomatic and asymptomatic people in all healthcare facilities – whether in containment zones or outside them.

ICMR also said those people who get negative results on the rapid antigen kit must be retested using RT-PCR, given the antigen test’s low sensitivity, while those who get positive results needn’t get a retest.

It is this part of the advisory that makes little sense, according to Shriprakash Kalantri, an internal medicine specialist at Mahatma Gandhi Institute of Medical Sciences, Sevagram. Kalantri said that in many hospitals outside hotspots, fewer than 2% of the people could be infected at any point of time. If this is the case, with a sensitivity as low as 50%, the test will yield a negative result 98% of the time (false negatives plus true negatives). This means a hospital following ICMR’s advisory and using the antigen test will need to use the RT-PCR test with 98% of people. So why use the antigen test in the first place, he asked. “This doesn’t reduce diagnostic uncertainty at all.”

This problem is likely to occur in containment zones as well. Even if the prevalence of COVID-19 infections in a region is as high as 10% at any time, a test with 50% sensitivity and 99% specificity would yield a negative result up to 94% of the time. And as per ICMR guidelines, all these people would have to be retested.

The retesting makes ICMR’s strategy uneconomical, given that the cost of each rapid antigen test is capped at Rs 450. And C.S. Bedi, a medical advisor to SD Biosensor, has said the price of the kit could be higher than Rs 450 for non-governmental buyers.

So if the antigen test is administered to 1,000 asymptomatic people in a region with a COVID-19 prevalence of 1%, the cost of the exercise would be at least Rs 4.5 lakh. However, given the test’s sensitivity of 50%, 995 people will test negative and will have to submit to RT-PCR retests. Assuming a price of Rs 2,000 per RT-PCR test, the overall exercise will cost Rs 24.4 lakh.

Compared to a strategy where only RT-PCR is used for everyone, ICMR’s new strategy costs Rs 4.4 lakh more, while also doubling the time and effort, Suresh Vazirani, the founder of Transasia Bio-medicals, a medical diagnostics company, said.

Should people use the test at all?

Some experts say the test could still be valuable given how expensive and cumbersome the RT-PCR test is. Jayaprakash Muliyil, an epidemiologist at Christian Medical College (CMC), Vellore, suggested that ICMR ought to have skipped the requirement to retest negative samples. According to him, the antigen test is likely to be negative mainly when the SARS-CoV-2 viral load is low and the person is thus not infectious.

He pointed out that ICMR likely determined the antigen test’s sensitivity by comparing its results against an RT-PCR test on samples from the same set of people. However, he said that a positive on an RT-PCR test doesn’t always mean that the person is infectious. “People continue to show up as positive on the RT-PCR test even after they stop transmitting.”

Since a comparison with RT-PCR tests would make the antigen test’s false negative rate seem high, Muliyil thinks a negative on the antigen test can be considered to be a true negative: it would mean that the person has a lower viral load and is less likely to be infectious.

But we don’t know this for sure. Only a study of the correlation between the infectiousness of a person and positivity on the antigen test can determine this. If ICMR had conducted such a study, it would have enhanced the public-health use of the antigen test, Muliyil said.

The antigen test could also be deployed by pooling negative samples while retesting them via RT-PCR, instead of retesting individual negative samples, according to Jacob John, a professor of community medicine at CMC. If 8-16 negative samples could be tested in one go, the cost of RT-PCR tests could be lowered, making the whole exercise more economical. Such a strategy would work in regions with high prevalence, John said.

However, the rapid antigen guidelines make no mention of pooled-testing – nor do they suggest a minimum threshold of prevalence for regions where the test should be deployed.

Emailed questions to ICMR about the strategy went unanswered.