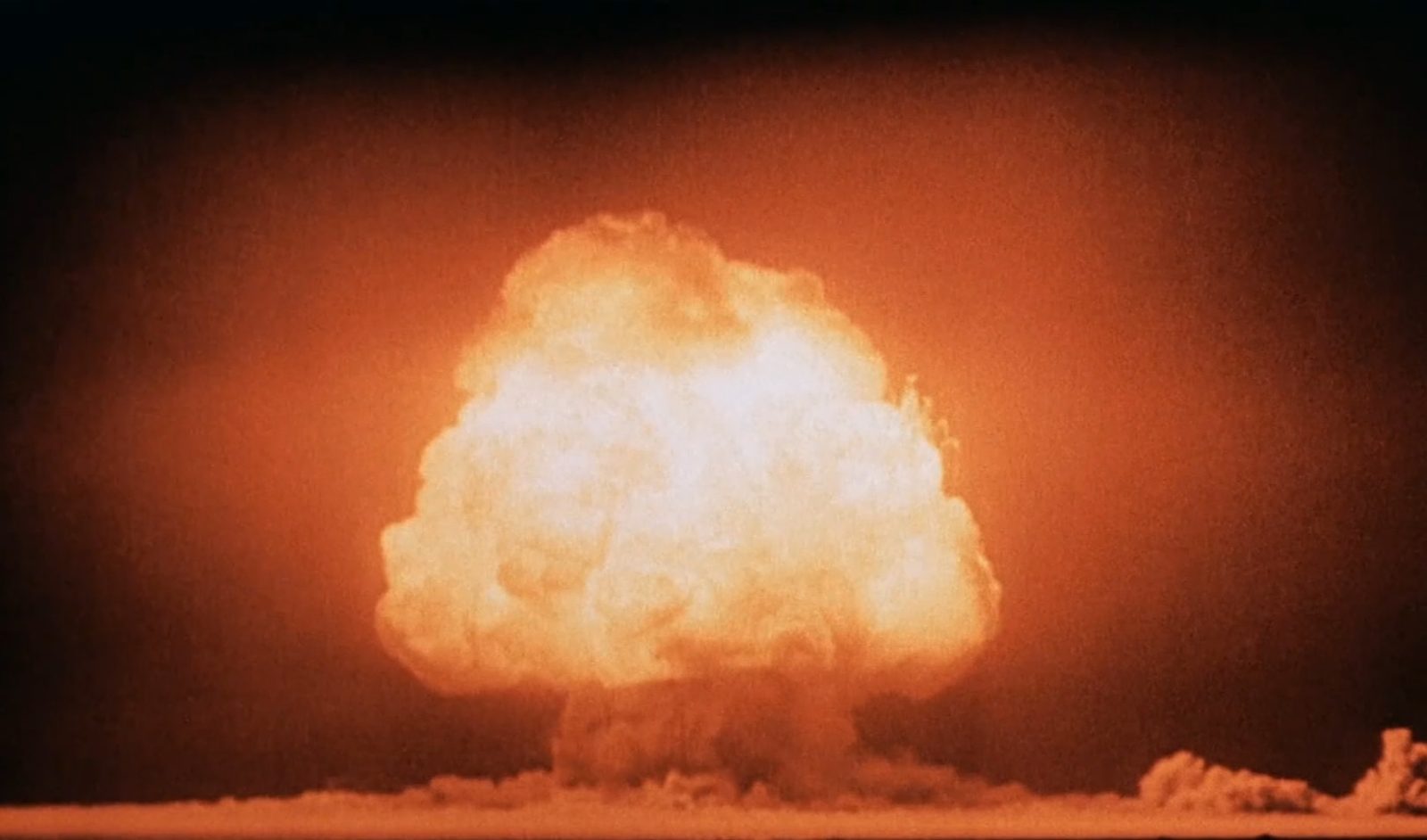 A view of the Trinity test seconds after detonation, July 16, 1945. Photo: US Department of Energy

Scientists have discovered a quasicrystal – materials with an unusual internal structure – in the detritus of the world’s first nuclear bomb test in 1945, Chemistry World has reported.

In the test, conducted on July 16, 1945, in New Mexico, members of the Manhattan Project and the US military detonated a plutonium bomb whose yield was equivalent to 22 kilotonnes of TNT. The explosion instantaneously outshone the Sun, blasted a crater 1.5 m deep, sent a mushroom cloud roaring 12 km into the sky and rapidly transformed the sand around the site into a mineral later called trinitite.

A group of researchers went looking for quasicrystals in this trinitite – and found it.

After their confirmation, the Los Alamos National Laboratory tweeted that these quasicrystals are now the oldest known human-made ones.

The discovery is notable because of how unique quasicrystals are.

In physical chemistry, a crystal is any compound whose atoms are arranged in a fixed, repeating pattern. In the 1970s, the famous chemist and Nobel laureate Linus Pauling had worked out what these patterns were. Pauling had a formidable body of work behind him, so his discoveries were taken as gospel.

But in 1982, Dan Shechtman stumbled upon a crystal that had a ‘forbidden’ pattern. Its atoms had a fixed arrangement in space – but it didn’t repeat itself in any way that Pauling had predicted.

At first, Shechtman’s work was dismissed as the result of a mistake. Pauling refused to acknowledge that Shechtman had found something important, and went so far as to make his now-infamous comment: “There are no quasicrystals, only quasi-scientists.” (‘Quasi’ is a prefix meaning ‘almost’.)

However, Schechtman wasn’t the only scientist to have found quasicrystals. Around the same time, Dov Levine and Paul Steinhardt had independently discovered these crystals as well. After seeing the resistance to Shechtman’s early announcement, they waited until they published their results, especially Levine was still a postdoc at the time and having his work dismissed could harm his career.

Steinhardt – now a professor at Princeton University, New Jersey – is one of the members of the team that has recovered quasicrystals from the trinitite. He was previously involved in an expedition to Siberia, Russia, in which the team discovered the first natural quasicrystals: in meteorite fragments.

More specifically, the team studied a red version of trinitite created when superhot sand fused under high pressure with copper cables at the test site.

Steinhardt told Scientific American that the team thought to look for quasicrystals in the trinitite because it knew high temperature and high pressure environments could create quasicrystals.

The material in which Shechtman detected the presence of quasicrystals in 1982 was a synthetic alloy. The newly discovered quasicrystal is a unique combination of iron, silicon, copper and calcium, as the team’s paper describes in their paper published on May 17.

It’s not easy to make alloys of sand. Lincoln Hollister, professor emeritus of geosciences at Princeton University, told Nature, silicon “typically occurs in rock in an oxidised form. Reversing the oxidation requires extreme conditions, such as intense heat and the pressure of a shockwave.”

The atoms in the quasicrystal recovered from the red trinitite were arranged in a pattern with a pentagonal symmetry: as Forbes put it, the arrangement looked the same if you rotated it by 72º (one-fifth of 360º).

Shechtman had explained in the 1980s that such a symmetry could arise if the atoms were located at the vertices of a polygon with 20 faces – an icosahedron. Pauling’s work at the time couldn’t explain the existence of such a pattern.

Understanding the structure of quasicrystals is key to understanding the conditions in which they might form. For example, the red trinitite team found a silicon-based quasicrystal because they knew how high temperature and pressure can transform sand.

According to Terry Wallace, a former director of the Los Alamos laboratory and a member of the red trinitite team, quasicrystals in a way preserve a geochemical record of the powerful explosions that create them (outside laboratory conditions). By studying them, scientists can understand more about the explosions themselves, as well as unearth more features of quasicrystals as well.