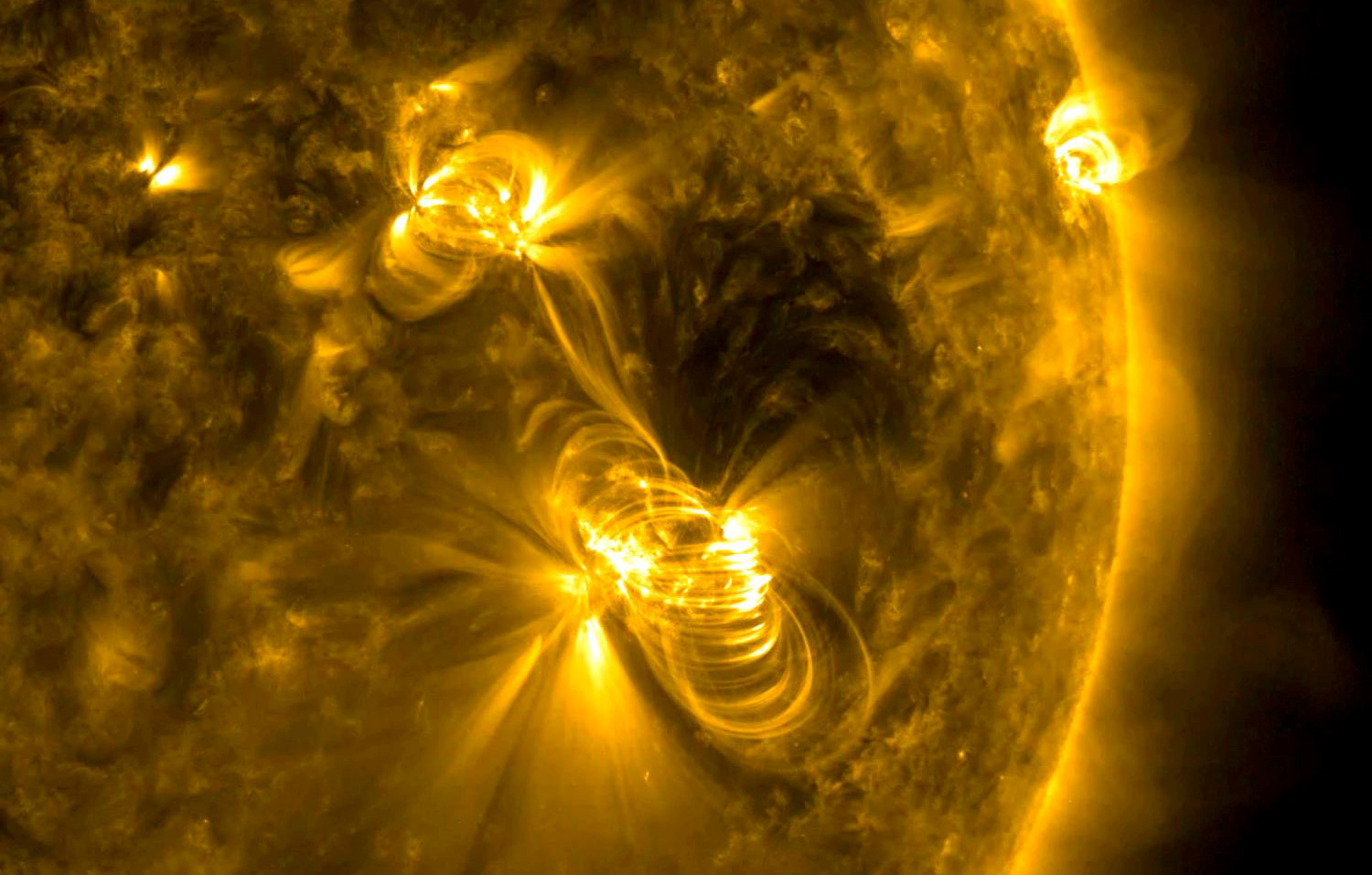 A medium-sized (M2) solar flare and a coronal mass ejection erupting from a large active region of the Sun on July 14, 2017. Photo: NASA/GSFC/Solar Dynamics Observatory.

But some news reports have also been accompanied by anxiety about solar flares – extremely energetic bursts of radiation from the Sun – that could disrupt electromagnetic phenomena on Earth, including radio transmissions and AC currents. The reports are concerned with one particular cluster of sunspots, designated AR2770.

For example, Indian Express reported on August 10 that “few minor space flares have been emitted by this particular sunspot already, which has not caused anything major… However, if this sunspot, which can be up to 50,000 kilometres in diameter, may release a huge amount of energy, which in turn will lead to solar flares. These eruptions may lead to solar flares and storms.”

While stronger flares have the potential to inflict damage on or near Earth, very few of them actually do. Dibyendu Nandi, a solar astrophysicist at the Centre of Excellence in Space Sciences India (CESSI), IISER Kolkata, said that a truly “killer” flare, such as one that could disrupt GPS navigation and shut down power grids, happens around once every century. The last such storm occurred in 1859 – called the Carrington event – and a somewhat less stronger one occurred in 1989.

But while a very powerful flare would be statistically overdue, thus far, AR2770 hasn’t been showing any activity to indicate it may be the cause of such a storm.

Sunspots are (relatively) small patches on the Sun’s surface where a dense clump of magnetic fields has collected. They appear as darker spots because the fields push back on material flowing from inside the star to the surface, as well as on superhot plasma mixing around on the surface, keeping them cooler: about 4,500 K instead of the usual 6,000 K.

As solar activity increases in the first half of the solar cycle, sunspots become more common and more energy is imparted to the solar winds as well. As T.V. Venkateswaran reported in 2017, “When relatively fewer sunspots are on the [Sun’s] surface, the solar wind blows from the star’s equatorial region at 400 km/s and from the polar regions at nearly 700 km/s. When the sunspot activity is more pronounced, the magnetic fields become scrambled and the solar wind blows more energetically from all parts of the Sun.”

According to NASA, “Solar flares are a sudden explosion of energy caused by tangling, crossing or reorganising of magnetic field lines near sunspots.”

Space Weather Archive reported on August 3: “AR2770 has two dark cores (each about the size of Mars) and is crackling with minor B-class solar flares. Its potential for even stronger flares will become clear in the days ahead as the sunspot turns toward Earth, more fully revealing its magnetic complexity.” And in the last five days, according to Nandi, it doesn’t look like anything catastrophic is brewing.

“Solar cycle 25 is just beginning and new sunspots are starting to appear more frequently on the Sun. However, we don’t anticipate any ‘killer’ solar storm from a gigantic sunspot coming anytime soon,” Nandi said. “CESSI at IISER Kolkata was established with the goal of generating space-weather forecasts for the nation … and we see no chances of a strong flare.”

According to the International Business Times, an amateur astronomer named Martin Wise from Florida was the first to spot AR2770, earlier this month. On August 9, Wise uploaded a new set of images on Space Weather Gallery and wrote that he had taken another look at AR2770, and had observed a “pronounced light bridge”. A light bridge is a thin patch of solar material that has arisen within a cluster of sunspots, connecting material on either side of the spots with each other. It’s a sign that the AR2770 cluster is breaking up into smaller pieces – the beginning of its end.