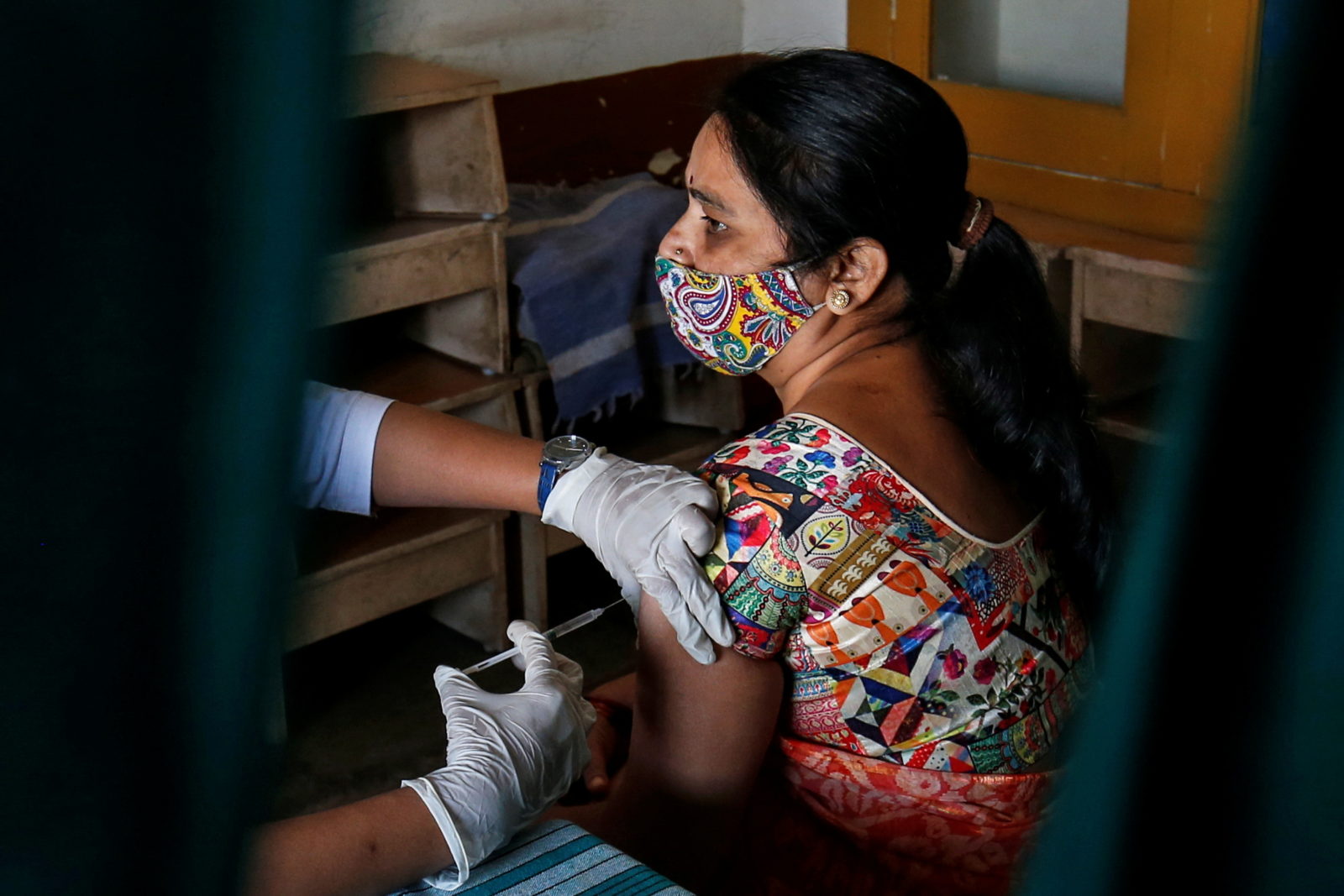 A healthcare worker receives a dose of Covishield at a vaccination centre in Sanand, Gujarat, January 21, 2021. Photo: Reuters/Amit Dave

Bengaluru: A new comparative study has found that both Covaxin and Covishield, the two major vaccines in India’s COVID-19 vaccination drive, evoke a substantial level of antibodies against the infectious disease after a recipient has received both doses.

Researchers affiliated with centres in Kolkata, Ahmedabad, Dhanbad and Jaipur tracked 515 healthcare workers in 22 cities from January to March 2021 – three weeks after each worker received one and then both shots of either Covaxin or Covishield.

Independent experts have noted in social media posts that the study is notable because it compares the two vaccines with each other.

This said, others have also reported that the study may have some important limitations that render it unsuitable to be the basis for crucial decisions.

According to their preprint paper, uploaded on June 4, 2021:

All samples were collected as either serum or plasma using EDTA vials from each participant and analysed at Central laboratory of Neuberg, Supratech, at Ahmedabad, Gujarat, India.

They reported the following, summarised from the preprint paper:

2. After two doses of both vaccines, seropositivity1 was 95%

3. 80% of Covaxin recipients and 98.1% of Covishield recipients were seropositive

(Note that this doesn’t mean 20% of Covaxin recipients had no antibodies; it means their antibody levels were below the detection kit’s minimum of 15 AU/ml.)

4. When the researchers repeated this analysis after excluding the participants who had previously had COVID-19, they found similar results.

The researchers also reported that of the 515 healthcare workers, 27 got COVID-19 after getting both doses (5.5% among Covishield recipients and 2.2% among Covaxin recipients). However, none of these cases of ‘breakthrough infections’ were severe: two had a moderate form of the disease and the rest were mild.

The makers of both Covaxin and Covishield have reported in previous announcements that both vaccines are highly efficacious at preventing severe COVID-19.

Dr A.K. Singh, of the G.D. Hospital and Diabetes Institute, Kolkata, and a member of the research team, told The Hindu “the greater number of infections [in the cohort] after the second wave was probably due to the increased number of cases after April and the high exposure of the study participants – all doctors in COVID-19 hospitals – to patients during the second wave.”

“Overall, 97.8% of those who never had COVID-19 and had two complete doses of Covishield had detectable levels of antibodies, or tested seropositive, compared to 79.3% with Covaxin,” the newspaper reported.

One finding in the study has grabbed many headlines – that Covishield evoked more antibodies than does Covaxin. But journalist Prasad Ravindranath quoted Chandrakant Lahariya, a public-health expert, saying this only means Covishield’s protection will last longer, not that it is better.

In addition, the results for Covaxin are based on fewer than 100 recipients in the cohort. This is too small a group with which to reach conclusions that can be applied to millions of people.

Dr Jammi Nagaraj Rao, a doctor and public-health expert in the UK, also tweeted that “Covaxin leaves 20% without seropositivity,” according to the study, but that this doesn’t help us say anything about the vaccine’s efficacy.

The question of the vaccine’s efficacy arises because Bharat Biotech, Covaxin’s maker, is yet to report final data from the shot’s phase 3 clinical trials. An announcement of preliminary results in early March 2021 indicated Covaxin has an efficacy of 80.6% against mild to moderate COVID-19.

However, other problems in the data the researchers have shared with their results are more stark.

First, the total number of participants listed in one table in the preprint paper (supplementary table 6) is 552, versus the reported 515.

Second, immunologist Satyajith Rath told Ravindranath that the media antibody titre2 after the second dose of Covaxin was 20 AU/ml – but the total range of all values is reported as 51-125 AU/ml.

Third, for one analysis, the researchers divided the 515 healthcare workers into two groups: those who had been infected by COVID-19 before and those who hadn’t. Then they reported median antibody titre values for each group – but not the titre values only among those found to be seropositive. Rath reportedly said this was another problem.

Fourth, Gagandeep Kang, a vaccine expert and professor at Christian Medical College, Vellore, told Ravindranath that “the median antibody titre value is the same as the upper limit of the range in the case of those with previous infection.”

That is, the median titre value among those who received one dose of Covishied is 400 AU/ml and the reported total range is 298-400 AU/ml. Similarly after a single dose of Covaxin: 260 AU/ml against a range of 214-260 AU/ml. The pattern repeats itself for the post-second-dose data as well.

In statistics, the median is the middle number in a list of numbers. Its value can’t be the upper limit of the range. If it was, the actual median value would be lower.

On a separate note, the research team’s findings regarding Covishield could be relevant in the context of the changes the Union health ministry has been making to the inter-dose gap. It recently announced an intention to check if a single dose of Covishield could suffice.

When it began rolling out vaccines for use in mid-January 2021, the government recommended the gap between two Covishield doses to be four to six weeks. This has been increased on multiple occasions and currently stands at 12-16 weeks. The government has said this is to accentuate the vaccine’s efficacy, but the expanding gap has paralleled the government’s struggle to procure more Covishield doses after it bungled vaccine production and distribution.

Earlier, a Public Health England study had found that a single dose of Covishield is only 33% efficacious against symptomatic COVID-19 caused by the B.1.617.2 – a.k.a. ‘Delta’ – variant of the novel coronavirus. After two doses, the efficacy jumps to 60%.

Beyond these issues, many unknowns still remain. Perhaps the biggest is that we still don’t have an immune correlate of protection.

“Scientists expected that a type of antibody, called a neutralising antibody, had a role in preventing COVID-19 infections,” Journalist Priyanka Pulla recently wrote. “But how much of it would have to be present in a person’s blood to keep them safe from disease? This level, known as an ‘immune correlate of protection’ is something scientists ordinarily spend years to measure, says [Gagandeep] Kang.”

The absence of this answer makes both phase 3 clinical trials and studies like the present one more important.