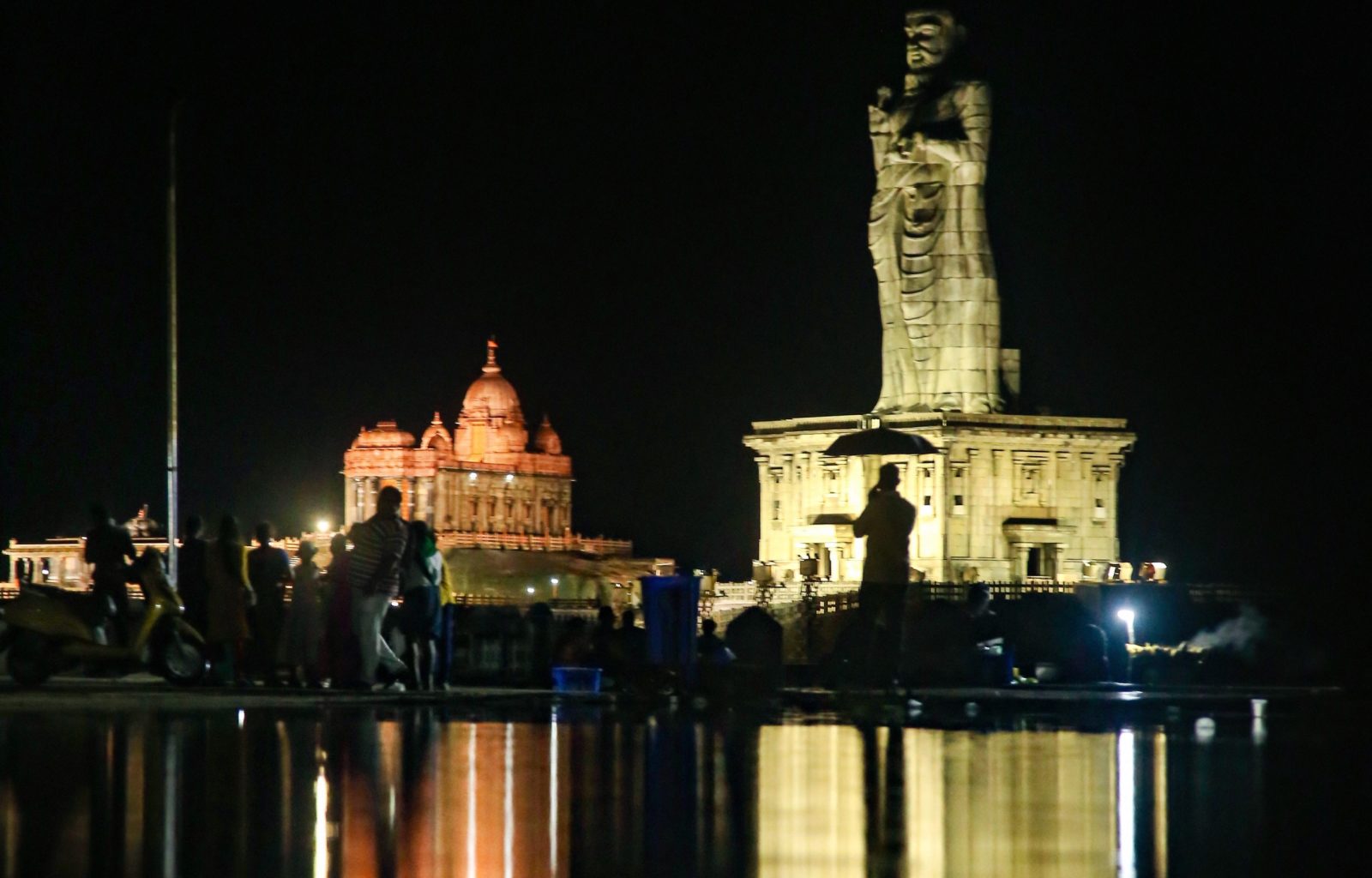 The Vivekananda Rock Memorial and Thiruvalluvar statue are reflected in floodwater in Kanyakumari, November 8, 2021. Photo: PTI

Bengaluru: While scientists can’t say whether a given weather phenomenon has been modified in any way by climate change without some analysis first, the effects of climate change have also been becoming more and more pronounced – sometimes to the point where they’re too obvious to overlook.

Just in the first week of this year’s northeast monsoon, Tamil Nadu has received excess rain of 41%. ‘Excess’ means the quantum of rain thus far has been 141% – and the India Meteorological Department (IMD) has forecast even more. Specifically, a cyclonic depression over the Bay of Bengal is likely to strengthen on November 10 and move closer to Tamil Nadu in a day.

It’s always possible that an expected weather event becomes unexpectedly intense, or feeble, as a freak occurrence. But when it happens regularly, it’s no longer a freak of nature; it’s a feature.

On November 7, Chennai city’s Nungambakkam rainfall observatory recorded 215 mm of rain in 24 hours – the second-highest in the last decade. The highest was recorded six years ago, on November 16, 2015. And between October 1 and November 9 this year, Chennai has received 593.4 mm of rain, which is 148% of the historical average for the same period.

These numbers are courtesy of Climate Trends, a Delhi-based climate communications initiative.

That climate change could have a hand in intensifying the monsoons doesn’t mean the carbon dioxide in the air directly makes the rains worse. The mechanisms of action are typically more indirect. A simple example is that as the air warms, it becomes able to hold more moisture. So when storms form, they are laden with a greater amount of water vapour.

More complicated phenomena are also at work, often at great scales of space and time. As a case in point, a brief prepared by Climate Trends quotes meteorologists to say that the northeast monsoon is so intense this year because three “key oceanic parameters” have come together. They are:

Climate change affects these phenomena in different ways as well.

Thanks to global warming, the oceans are also becoming warmer. Once every few years, winds off the west coast of South America blow the warm Pacific Ocean water further west, towards East Asia. This movement allows colder water from the lower Pacific Ocean to rise towards the surface. The overall effect, called La Niña is for the ocean surface temperature to be cooler than normal across the eastern equatorial portion of the Pacific (see image below).

(La Niña is Spanish for ‘little girl’. The phenomenon was named thus to be a contrast to El Niño, or ‘little boy’, which is a weather pattern that makes the ocean surface warmer than normal.)

Weather scientists have mapped the effects of La Niña to intense rainfall over South and Southeast Asia, Southern Africa and North American’s western coast – and droughts over East Africa and parts of South America.

Climate change impact: According to Michael McPhaden, a senior scientist with the US National Oceanic and Atmospheric Administration, “Extreme El Niño and La Niña events may increase in frequency from about one every 20 years to one every 10 years by the end of the 21st century under aggressive greenhouse gas emission scenarios. The strongest events may also become even stronger than they are today.”

When the western Indian Ocean is warmer, called the ‘positive’ phase, there is more rain off India’s west coast – and droughts as far away as Australia. However, scientists have also correlated a positive dipole with stronger monsoons; according to Climate Trends, the dipole today is neutral but towards the positive side.

When the eastern Indian Ocean is warmer, called the ‘negative’ phase, the pattern is flipped.

Climate change impact: El Niño, the Indian Ocean Dipole and the monsoons have historically jointly mediated the weather over the Indian region. But when scientists from Australia, Germany, Indonesia and the US studied the dipole based on oxygen isotopes in Indian Ocean corals, they found that it has been becoming more intense in the 20th century – so much so that it appears to be directly affecting the monsoons, agnostic of El Niño.

The Madden-Julian oscillation is a simple but influential climate system. It consists of an alternating pattern of higher and lower tropical rainfall – moving together as a system in an eastward direction around the world once every two to three months (see image below).

About a week or two before the oscillation arrives over southern Asia, the sea surface warms more. Then, as the oscillation continues its eastward journey, at about 2-9 m/s, the formation points of cyclones also move eastward, pulling them away from India’s southeast coast.

According to experts quoted by Climate Trends, the Madden-Julian Oscillation is currently “parked” over the Indian Ocean, and will favour “enhancing the northeast monsoon over the South Peninsula, especially Tamil Nadu”.

Climate change impact: Climate scientists from Mumbai, Pune and Visakhapatnam published a relevant study in October 2020. Here, they combined historical data from 1905, satellite data from 1974 and more advanced machine-learning models to conclude that the Madden-Julian oscillation has been becoming more intense through the 20th century.