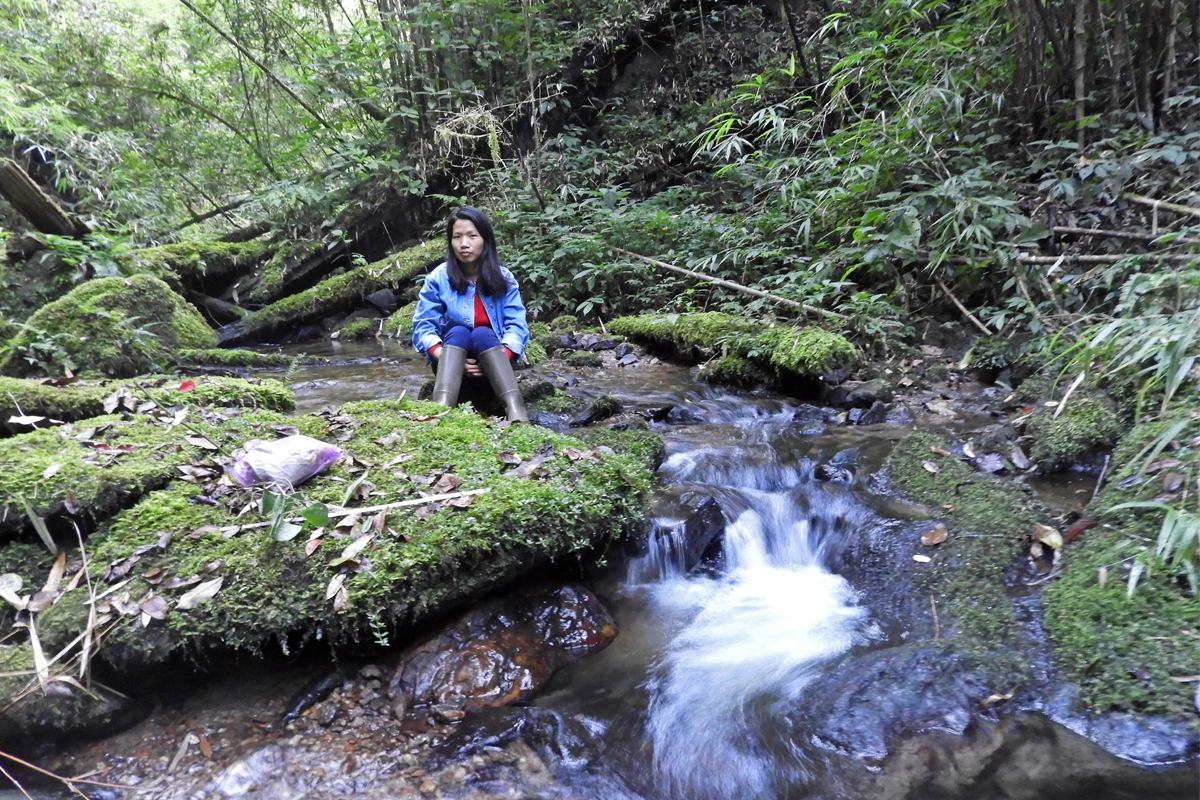 In 2019, budding ethnobotanist Momang Taram and her friend Ojar Taku were scouting the Siang river valley in Arunachal Pradesh for flowering plants belonging to a specific family.

“Then suddenly we both (Ojar Taku and I) observed some yellow flowers hanging far from the cliff in East Siang district. He scaled that cliff with great risk and somehow brought a single plant,” recounts Taram, a PhD student at the state’s Rajiv Gandhi University. At first sight, Taram said she knew the flower belonging to the genus Henckelia was a novelty, “because almost all the described Henckelia of this region are etched in my mind.”

Taram, is an Adi, a prominent indigenous community in the biodiversity-rich northeast India, and calls the Siang valley home. The “novelty” was named Cin honour of the place of description to prompt an emotional attachment with it.

“Naming the endemic species after the place will encourage the community to know more about the rich floral diversity of their locality, their importance, and they will try to conserve it, which has done the same magic for me too (in creating conservation awareness). So, far no traditional uses have been recorded for this particular species,” Taram told Mongabay-India.

Priding herself on her ability to tap into the vast wealth of traditional knowledge of her community for research, she acknowledged community members who help in her fieldwork through uncharted forest terrains where venturing alone might be risky in terms of safety, for a woman.

“Knowledge of indigenous communities also helps in taxonomic studies, as they always provide the necessary hints of flowering and fruiting, availability, and location when we give them the specifics of what we are looking for. And ethnobotany as a whole depends on their knowledge, and we are just the media to distribute their knowledge to a greater mass,” Taram said.

“The local community has a large role to play in Arunachal Pradesh where more than 80 percent of forested areas are private lands,” she emphasised.

She credits Ojar Taku for site-specific knowledge of the plants, especially in unfamiliar forested terrains. Also, she is acrophobic, which means she has to deal with an irrational fear of heights – a challenge in her line of work. So Ojar Taku aids with the collections.

“Though we are not less than a man in any field, I realised that my physical strength is not as good as my male partners. So being a good friend, Ojar Taku helped me on several trips in those terrains. He has a good idea of the locations of the valley and also has good knowledge of the plants in a less scientific way,” said Taram.

The genus Henckelia belongs to the flowering plant family Gesneriaceae with over 3000 species, including the lipstick plant (Aeschynanthus radicans), a popular ornamental plant. Interested in almost all the vascular plants except grasses, Taram is currently working on Gesneriaceae’s taxonomic revision (updating the taxonomy) in Arunachal Pradesh and bio-cultural studies on the Adi community.

“I was in search of Gesneriads of East Siang District, especially trying to find out the habitat preferences and variations in an endemic species, Henckelia mishmiensis on the rocky surfaces of a streamside,” Taram said while recounting the description of H. siangensis.

Called Libe lirak Appun in the Adi language, the species with its five winged-petals is conspicuous among rock crevices with its striking yellow colour. Gesneriaceae plants usually prefer moist, shaded areas along streams, rock surfaces, crevices, or tree trunks. Taram has described nine species and one variety from Arunachal Pradesh (including five from the Gesneriaceae family) in collaboration with researchers from India and other countries.

Also read: The Journey of Black-Eared Kites Into the Indian Subcontinent, Unraveled

Concerned with challenges such as unplanned urbanisation and diversion of forest land for development projects, she is working with her peers to document and curate the traditional knowledge of the major ethnic communities of the region, including creating a non-profit website dedicated to identifying the plants by using local names used in the area.

“Siang valley is an unexplored paradise till today. Numerous workers from the British colonial period have also worked on plants, though much is unknown. In my perception, the major threats are unplanned urbanisation and lack of awareness; examples are practices like jhumming (shifting cultivation), commercial monoculture plantations, and the diversion of forest land for (infrastructure) development projects,” she said.

Situated on the northeastern tip of the country, the eastern Himalayan state has one of India’s most extensive forest cover (80 percent), and local communities largely manage the forests. AP is inhabited by the world’s largest variety of ethnic tribal groups and subgroups numbering over a hundred and each tribe speaking their language and dialect. Adi is one of the numerically largest tribes in AP, a forested state with lofty hill ridges and deep valleys drained by rivers, including the Siang.

Despite its existing green cover, Global Forest Watch data shows that Arunachal Pradesh lost 1110 square kilometres of humid primary forest between 2002 and 2019, making up 55 percent of its total tree cover loss in the same period. Government data reveals that in the last 30 years most forests were cleared in Arunachal Pradesh (over 3300 square km), Madhya Pradesh and Telangana.

Hydropower development is of significance in Arunachal Pradesh with its hydropower development potential estimated to be about 50,000 MW. However, not even 10-20 percent of the potential has been realised so far as the biodiversity-rich state attempts to balance out infrastructure projects with environmental concerns.

Taram says their “tribal way of living” ignited her interest in the relationship between people and plants (ethnobotany); further moulded by her mother’s fondness for ornamental plants and listening to the community’s older members talk about local lore. For instance, Taram, often seen in a pair of well-worn denim and boots in the rugged mountain terrains, narrated how she heard Adi community members in Upper Siang talking about a plant’s tender shoot used as a vegetable or chewed raw as an addictive substance.

“In further questioning about the appearance, it led me to Gesneriaceae. And luckily, I found that plant in the nearby areas. A detailed study of the plant (Rhynchotechum parviflorum Blume) led me to understand that it is not yet recorded from our country. I also took suggestions of Dr. Benjamin Anderson, who revised the genus (Rhynchotechum) globally,” explained Taram.

R. parviflorum usually prefers cliffs near perennial streams in primary forests and secondary forests and damp groves near roadsides. “It was not recorded from mainland India so far; the distribution in India of this species was only from Andaman and Nicobar Islands, and so we communicated the article in the Journal of Threatened Taxa.”

Floristically, northeast India hosts 43 percent of the total plant species occurring in India. The rate of endemic species (species that are only found in northeast India) percentage is also high. While Taram intends to explore other parts of the eastern Himalayas, her current pursuits are focused on the Siang valley because of the familiarity with the region and its people.

Also read: A Citizens’ Movement to Protect Wetlands Emerges in Jammu and Kashmir

Globally, at least a quarter of the global land area is traditionally owned, managed, used, or occupied by Indigenous Peoples, according to an Intergovernmental Science-Policy Platform on Biodiversity and Ecosystem Services (IPBES) assessment. The report states that recognition of the knowledge, innovations, and practices, institutions, and values of Indigenous Peoples and Local Communities and their inclusion and participation in environmental governance often enhances their quality of life, as well as nature conservation, restoration, and sustainable use.

Researchers have emphasised that the Adi community’s traditional knowledge and forest classification system supported by advanced tools like global positioning system and satellite imagery can be immensely useful for sustainable ecosystem management in the region, which can feed into State’s Action Plan on Climate Change (REDD+) and sustainable Himalayan ecosystem initiative.

Momang Taram believes species should be left untouched for conservation but acknowledges that it isn’t feasible. “So we can create biodiversity parks in cities, towns, etc. to showcase the interesting plants we have by cultivating them there. Additionally, awareness meetings, fair, tree talks, and treks to regions with great diversity can be organised,” she suggested.

Among other actions, Taram batted for more recognition of protected areas and community-based protection such as those in action in the sacred groves of Meghalaya and other states. “It’s the community that can do its best to conserve their resources,” she signed-off.

This article was originally published on Mongabay India and is republished here under a Creative Commons licence.