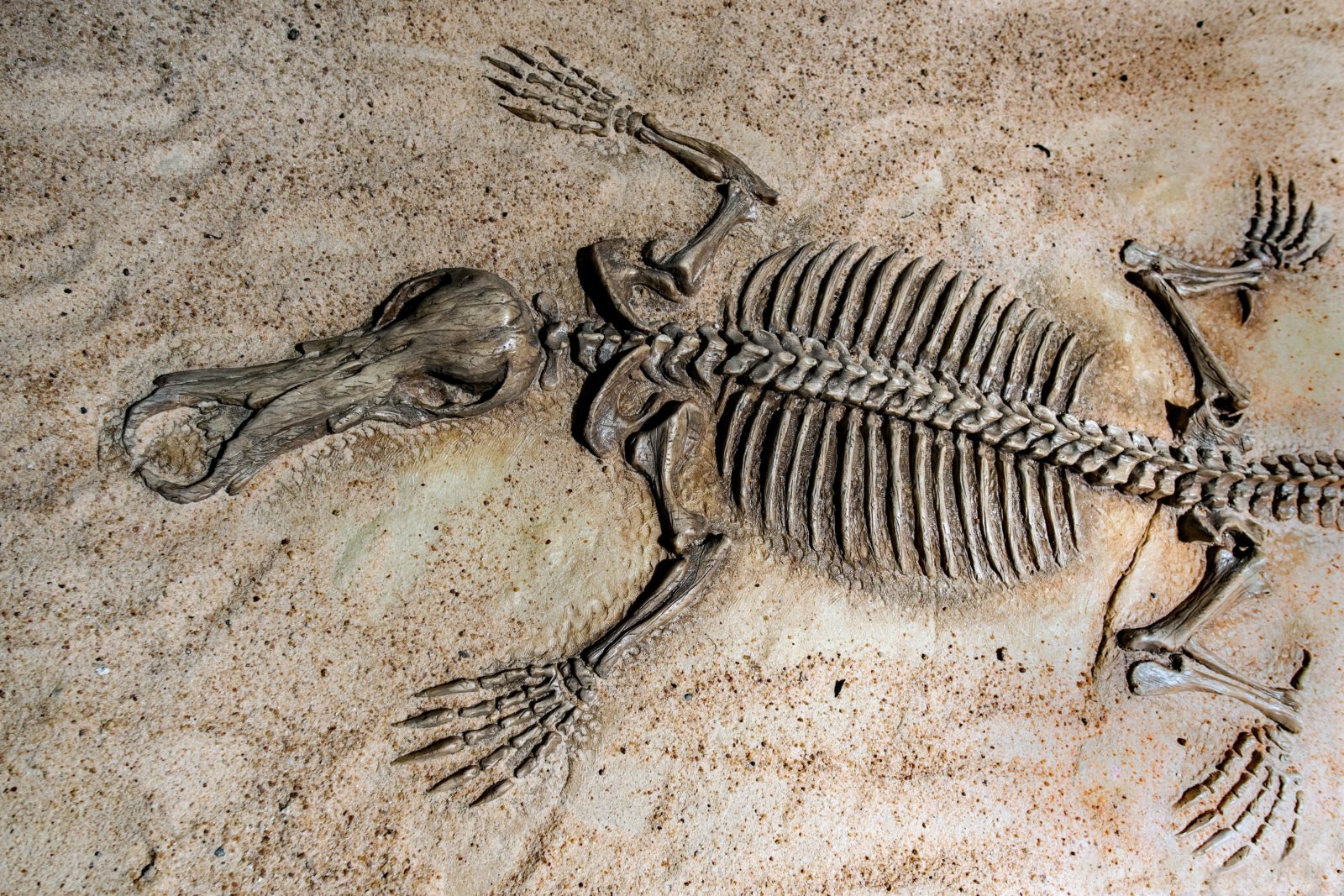 A model of a fossil of a giant-toothed platypus from the Riversleigh fossil fields, at an aquarium in Queensland, Australia. Photo: David Clode/Unsplash

Kochi: Species are created, they sometimes give rise to others, and finally they go extinct. That’s evolution at work, and it’s been happening for millions of years.

Some 66 million years ago, an asteroid struck Earth and caused the dinosaurs to go extinct, probably helped along by a spate of volcanic eruptions around the planet.

When the dinosaurs disappeared, they left behind many ecosystems without predators and many others without prey. The birds and animals that did survive rushed to fill in these ecological voids.

The first mammals were already around in the time of the dinosaurs, and the asteroid impacted them too. But without the dinosaurs in the picture, the mammals likely had more opportunities to do well and diversify.

Species go extinct all the time, and the ecosystems they once occupied adapt to their disappearance. So why is the current wave of species extinction such a big deal? Won’t the natural world just adapt? Why should we care?

The pace of evolution is moderated by natural changes, which are rarely rapid or overwhelming. But human activities today are forcing species to adapt too fast for evolution – or disappear. This sixth mass extinction event is unlike anything Earth has had before.

In 2019, the IPBES Global Assessment Report on Biodiversity and Ecosystem Services said around a million plant and animal species are now threatened with extinction – the highest threatened at any one time in human history.

The WWF’s 2020 ‘Living Planet Report’ said wildlife populations worldwide are “in freefall”. It estimated that the populations of mammals, birds, fish, amphibians and reptiles had dropped 68% on average since 1970.

We’re changing the environment so much and so fast that we’re accelerating extinction.

Some activities directly affect species’ ability to survive, like logging, poaching, fishing and mining. India’s Asiatic cheetahs were “hunted and captured indiscriminately in the 1700s and 1800s until one day not one was left”, according to conservationist Raza Kazmi.

Our other mode of impact is indirect, through climate change. More greenhouse gases in the atmosphere warms the surface, forcing entire interconnected ecosystems to suddenly adapt to higher temperatures – and their effects on soil composition, bacteria, plant growth, animal and bird life-cycles, weather, etc.

Many tree species are moving to northern latitudes in pursuit of colder climes. Himalayan birds are flying higher in search of nesting sites. Some crops are expected to be beset by more fungal diseases. Polar bears may not exist in the wild by 2100. These are part of our legacy.

The natural world is interconnected. Consequences for one species have cascading effects. Scientists studied the status of terrestrial vertebrates in 2020 and found that 515 species are on the brink of extinction. And as they moved closer to this fate, the fate of other species with which they interacted changed as well.

A species of endangered migratory bat pollinates a species of Agave – plants of the asparagus family, some species of which are used to produce tequila – during their annual migration from central Mexico to the southern US.

Climate change, however, could decrease the overlap in the distribution of Agave plants and these bats by 75%. If the bats go extinct, the plants won’t be able to reproduce as well, leaving them endangered as well.

We also don’t know how many species are out there, which means we don’t know how deadly these cascades can be. According to studies in 2013 and 2016, there are at least 5 million and as many as 1 trillion species on Earth. We’ve described only some 1.5 million so far.

And on December 9, 2021, the IUCN Red List had assessed the conservation status of only 7% of the 2.13 million species described until then.

Also read: Was the Death of the Last Male Northern White Rhino the End of a Hoax?

Reason 3: We need the species

Protecting a species means protecting its natural habitats. This is the most efficient way to mitigate climate change because conserving these habitats – by preventing deforestation, wetland encroachment and reef destruction – allows them to store more carbon in many ways.

Locking more carbon up in these natural systems is one of the best ways to offset our reckless carbon emissions.

Species, and biodiversity more broadly, support and sustain numerous lifeforms on Earth, humans included. They offer numerous ecosystem services – like pollinating our crops, soaking up excess rainwater, inducing winds that clear away pollution, creating deltas that support large-scale agriculture, etc. – that we simply can’t do without.

They’re tied to our economic growth.

So while we take it for granted, biodiversity is crucial both for us and for our descendants.