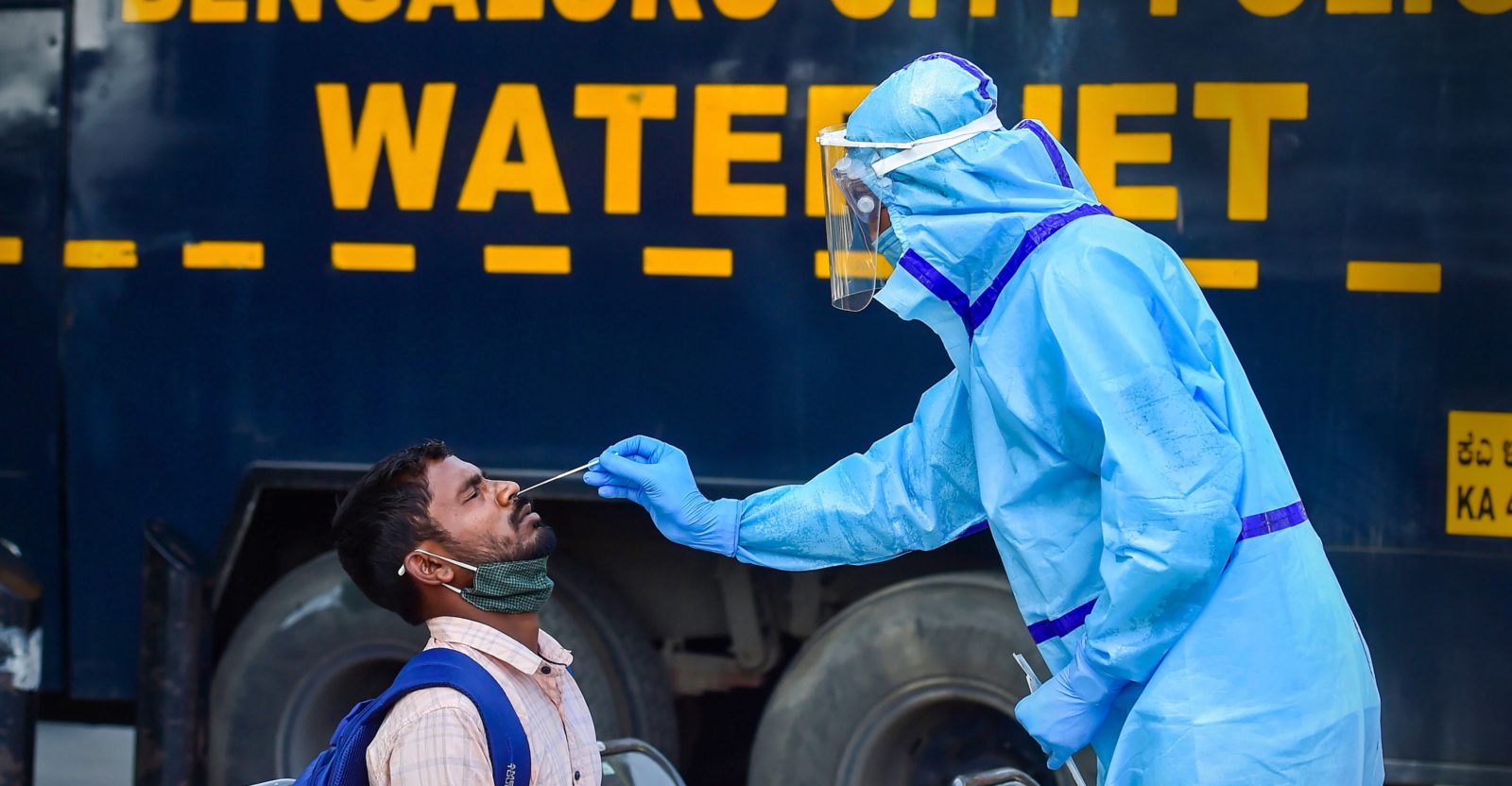 A health worker collects a swab sample from a passenger at the KSRTC bus stand, Bengaluru, December 14, 2020. Photo: PTI/Shailendra Bhojak

It’s expected by now that in every major outbreak of the novel coronavirus, genome-sequencing is a crucial component of epidemic surveillance. But even as India’s third wave is underway, driven by the omicron variant, at least five facilities that are part of the country’s genome-sequencing consortium have allegedly stopped work.

NDTV reported on Thursday that the cause was a shortage of reagents. All these facilities are part of the Indian SARS-CoV-2 Genomics Consortium (INSACOG). The Central government oversees this consortium, which currently comprises 38 labs. According to the report, the five facilities ran out of funds to buy the compounds required to sequence positive patient samples.

The Centre usually rebuts news reports it claims to be erroneous through the Press Information Bureau – but on this occasion, it hasn’t. This said, on Friday, Times Now quoted unnamed health ministry officials saying there was no reagent shortage.

Also on Friday, National COVID Task Force chairman Vinod K. Paul said all was well with India’s genome-sequencing effort and that the consortium had sequenced around 16,000 viral genomes from samples in December.

He didn’t say anything about a reagent shortage, however. (He also said India had sequenced the second-highest number of samples in the world; a fact-check by The Wire Science found this to be entirely false.)

At a review meeting that Prime Minister Narendra Modi had chaired on December 23, he stressed on the importance of genome-sequencing. He had made the same point in a COVID-19 response review meeting the previous month.

Even Union health minister Mansukh Mandaviya had asked state officials to ensure the minimum number of positive samples were being sent for sequencing every month. The Wire Science had revealed in November that states were stumbling.

Now, however, it appears a reagent shortage is limiting genome-sequencing efforts at the other end of the pipeline – the end that the Centre directly oversees.

The governments of Maharashtra, Kerala and Delhi have floated their own-genome efforts in addition to INSACOG. Of all the samples that have been sequenced thus far in the country, 27.1% have come from Maharashtra, 8.9% from Kerala and 7.9% from Delhi.

When the Centre created the consortium in December 2020, it said 5% of all positive samples would be sequenced. But India has never been able to sequence even 1% of all these samples. Four months later, the Centre revised the strategy to say all states would have to send 30 samples per month from each of their sentinel sites (a site where a large number of people get tested for COVID-19).

But even in early 2021, there was a reagents-related problem: as The Wire Science reported, the finance ministry had passed an order in May 2020 restricting the import of goods worth less than Rs 200 crore. This immediately pinched the supply of reagents and certain plastic lab equipment for which no Indian manufacturers existed. And the genome-sequencing efforts ground to a slow.

On January 21, Economic Times reported that genome-sequencing was finding the omicron variant in 90-95% of all positive samples, versus in 50% of samples until the last week of 2021.

Anurag Agarwal, the director of the Institute of Genomics and Integrative Biology, New Delhi, told the newspaper that even if the omicron variant is becoming more dominant, the delta variant is likely to linger in some small population groups because it’s more virulent.

For this reason, genome-sequencing is an important tool from the public health perspective: to understand which variant is spreading where, and how quickly, and tweak our policy response accordingly.