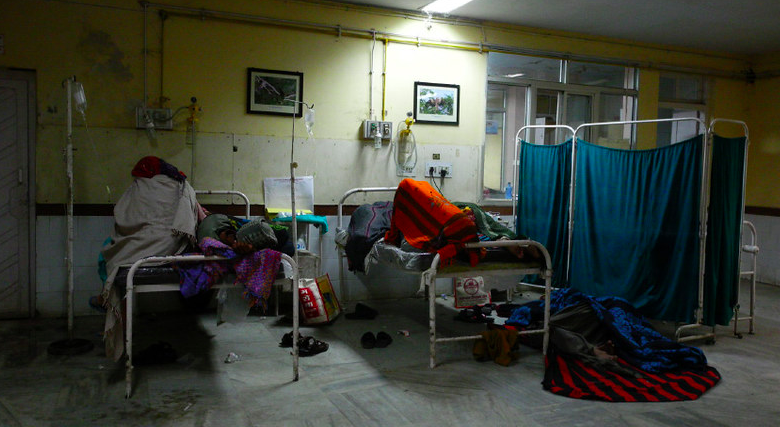 ‘You Are Letting People Die’: SC Comes Down Heavily on Governments Over Air Pollution

Jaipur: It has been two two months since the Ashok Gehlot-led Congress government in Rajasthan rolled out the Modi government’s Ayushman Bharat scheme in the state after modifying its name to ‘Ayushman Bharat – Mahatma Gandhi Rajasthan Health Insurance Scheme.’

However, so far, there seems to be no system in place to implement it.

In fact, the national portal of the Pradhan Mantri Jan Arogya Yojana (PM-JAY) shows that Rajasthan is yet to issue any e-cards. Nor have any pre-authorisation claims been raised by the state for beneficiaries entitled under the scheme.

Ayushman Bharat is the Modi government’s flagship scheme and aims to achieve universal health coverage. It is supposed to provide an insurance cover of Rs 5 lakh to each eligible family per year, for secondary and tertiary care hospitalisation across empanelled private and public hospitals.

To avail themselves of cashless treatment at any empanelled hospital under the scheme, it is compulsory for PM-JAY beneficiaries to get an e-card made by specially trained Ayushman mitras.

However, e-mitras in Rajasthan have not yet received any directions on how to go about issuing cards under this scheme. “The medical, health and family welfare department hasn’t conducted any special training on how to handle the Ayushman Bharat scheme but we have heard that it might happen in December,” an e-mitra told The Wire.

Even, the insurance company currently empanelled to undertake the scheme has no idea on how the benefits should be made available to the beneficiaries identified by the scheme.

“Our contract with the Rajasthan government was for the Bhamashah Swathya Bima Yojana (the state health insurance scheme launched by the previous Vasundhara Raje government) up to December 2019 and so far we haven’t been given any instructions to cater to the Ayushman Bharat beneficiaries,” Dharamveer Jand, associated with the New India Assurance company in Jaipur, told The Wire.

There are about 59.71 lakh Ayushman Bharat beneficiaries who have been identified by the government on the basis of deprivation and occupational criteria on the social, economic and caste census (SECC) database in rural and urban areas respectively, in Rajasthan. The number is 97 lakh under the Bhamashah Swasthya Bima Yojana (BSBY).

Also read: The Malaise of Profit and Capital Driven Healthcare

A total of 2,049 hospitals are empanelled for Ayushman Bharat in the state, comprising 551 public hospitals and 1,498 private hospitals.

While the “Ayushman Bharat – Mahatma Gandhi Rajasthan Health Insurance Scheme” website, which is accessible by all the empanelled hospitals in Rajasthan, gives the option of registering beneficiaries with their household IDs (Ayushman Bharat ID), this system is not functional.

When one enters the Ayushman Bharat ID, which is provided in the Prime Minister’s letter to the beneficiaries, on the state portal, a pop-up says “record not found”.

The primary reason for this non-functionality is the guidelines issued by the medical, health and family welfare department in Rajasthan for the implementation of the Ayushman Bharat – Mahatma Gandhi Rajasthan Health Insurance Scheme.

Entering the Ayushman Bharat ID along with the Bhamashah ID (the process is called ‘seeding’) can also reduce the number of family members of a particular household who can avail themselves of the benefits of the scheme.

Both the SECC and the Bhamashah have details of the family members of a particular beneficiary.

However, SECC contains the details of a household’s members as on 2011 and there are no means to update the details there.

However, in the Bhamashah, launched in 2014, details of the family members can be updated. If these two databases are used to cross-check members in a particular household, then those who are listed on the Bhamashah but not in the SECC will have to be dropped from seeking the benefits of the Ayushman Bharat health insurance scheme.

Those who can’t be marked are left out. Here, four members will be dropped.

Meanwhile, the medical, health and family welfare department has requested for a proposal for the selection of the insurance company for the implementation of the Ayushman Bharat scheme.

Speaking to The Wire, Khushaal Yadav, joint chief executive officer of the Rajasthan state health assurance agency, said, “The Ayushman Bharat scheme has been properly implemented in Rajasthan. We need to check why the national portal is saying there have been zero claims disbursed so far.”

Members of staff handling the scheme, meanwhile, said the database of the Ayushman Bharat scheme is not yet ready. This is why, they said, identified beneficiaries have not been able to seek any benefits.

Rajasthan, even under the Vasundhara Raje-led BJP government, had not implemented the Ayushman Bharat scheme because of its ongoing state health insurance schemes.

The ministry of health and family welfare had then said in a press release, “The two states [Rajasthan and Maharashtra] are currently reviewing the financial and operational implications of the convergence with Ayushman Bharat to avoid any disruption of services. The two states have ongoing contracts with insurance agencies. Both states will join Ayushman Bharat as soon as these issues are resolved.”