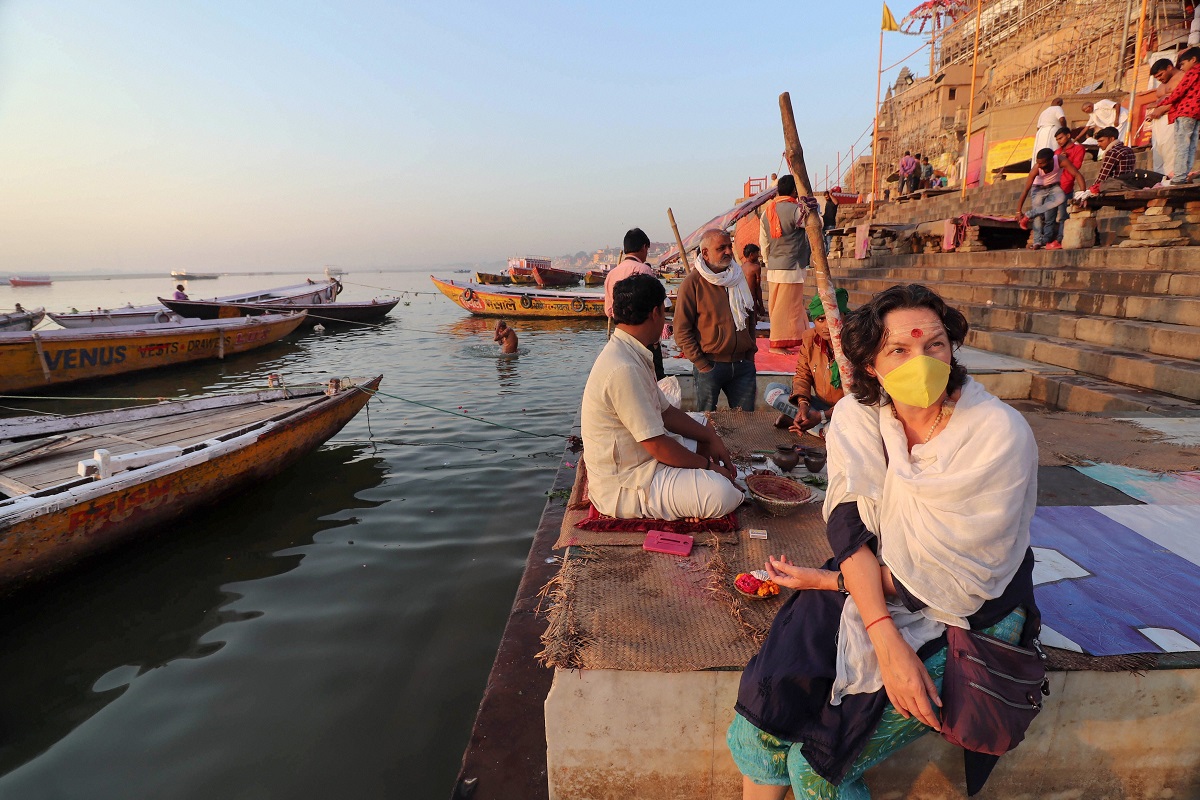 Featured image: A woman wearing a protective mask sits near a near deserted bank of River Ganga in the wake of coronavirus pandemic in Varanasi, March 20, 2020. Photo: PTI

India reported 22 new confirmed cases of the coronavirus infection as of 9 am on Friday. According to the Ministry of Health and Family Welfare, the total number of confirmed cases in India stands at 223 (including four deaths and 32 foreigners). The infection has been reported in 20 states and union territories so far. Addressing the nation on Thursday, Prime Minister Narendra Modi advised Indians to follow the guidelines of general precaution in order to avoid the spread of the virus.

Globally, there have been over 244,000 cases reported and the death toll breached the 10,000 mark. The death toll in Italy has passed that of China, where the disease originated. For the second consecutive day, China reported no new domestic cases of the disease. However, the country did report 39 new cases of the infection, all of which were ‘imported’.

BJP MP and son of former Rajasthan chief minister Vasundhara Raje, Dushyant Singh, has gone into self quarantine after attending singer Kanika Kapoor’s party. Raje tweeted that she too has taken similar precautions after attending an event in which Kapoor was also a guest.

While in Lucknow, I attended a dinner with my son Dushyant & his in-laws. Kanika, who has unfortunately tested positive for #Covid19 was also a guest.

As a matter of abundant caution, my son & I have immediately self-quarantined and we’re taking all necessary precautions.

Kapoor has become the first Bollywood celebrity to test positive for coronavirus in the country and says she’s under complete quarantine and medical care.

There were reports that the singer landed in Lucknow from the United Kingdom and was admitted in a city hospital after she showed signs of flu.

Dushyant, however, also went to the Parliament since attending the party. TMC MP Derek O’Brien, beside whom he sat, has gone into self-quarantine.

Reports have said that several other attendees of the party also went to a meeting of the Uttar Pradesh government.

The railways have announced the closure of all onboard services, mobile and static units of IRCTC from March 22 in view of COVID-19.

Items like branded aerated drinks, chips, tea and coffee may be allowed to be sold in trains if there is demand of onboard services, the officials said.

Two close relatives, including the husband, of the only coronavirus positive case in Kashmir have tested negative for the deadly disease, Senior Superintendent of Police Imtiaz Ismail Parray said on Friday.

“Want to update the well wishers again: 2 family members including father in law tested negative. Mother in law recovering very well by the grace of god. Thank u (sic) all for prayers n support. But we are following the due protocol,” Parray tweeted.

The SSP has himself been put under home quarantine after his mother-in-law tested positive for coronavirus on Wednesday night.

The Union Public Service Commission (UPSC) deferred the personality tests (interviews) of the candidates of civil services examination 2019 as a precautionary measure to check the spread of coronavirus, a statement issued by the Personnel Ministry said.

“New dates for the personality tests (interviews) will be informed to the candidates in due course,” it said.

Due to the prevailing conditions caused by COVID 19, as a precautionary measure, the Union Public Service Commission has deferred the personality tests of the candidates of the civil services (main) examination 2019 scheduled from March 23, 2020 to April 3, 2020 until further orders, the statement said.

A 49-year-old woman from Ulhasnagar city of Maharashtra who tested positive for COVID-19 attended a satsang at an ashram. Around 1,5000 devotees were at the event and the authorities are making efforts to trace them, to take necessary precautions.

According to the Times of India, the Ulhasnagar Municipal Corporation has also sanitised her residence.

Chinese officials held a video conference on the prevention and control of COVID-19 with officials and health workers of the Eurasian and South Asia region. Senior Indian officials and scientists from the health ministry and external affairs ministry discussed the efforts in combating the epidemic with their Chinese counterparts, tweeted Chinese ambassador to India, Sun Weidong.

(2/2) China stands ready to cooperate with India in fighting the Covid-19 and provide support and assistance within our capacity.

The Forest Research Institute in Dehradun has been put under complete lockdown in the wake of three coronavirus positive cases reported from there.

The order to put the institute under complete lockdown was issued by director general health, Amita Upreti, late on Thursday night.

The order asks the district administration to lock all entry and exit gates of the institute and ensure that no one either enters or comes out of it till further orders.

Two more IFS probationers at FRI tested positive for coronavirus on Thursday, taking the total number of positive cases in Uttarakhand to three.

They had returned recently from a study tour to Spain and had been quarantined at the FRI hostel since March 13, S.K. Gupta, a health official told PTI.

They are now shifted to the isolation ward of the Doon Hospital.

Another IFS probationer who was also from FRI had reported positive for the disease on March 15.

All three coronavirus patients in Uttarakhand were part of a 28-member batch of IFS trainees from FRI who had returned from Spain after a study tour.

Doctor who was turned away by four hospitals on ventilator

A doctor in Maharashtra’s Jalgoan, who was turned away from four private hospitals which suspected he had the coronavirus infection, has been put on ventilator support after he was admitted to the Government Medical College

According to the Indian Express, four private hospitals demanded that the doctor, who had high-grade fever and breathlessness, first submit a clearance that the patient does not suffer from COVID-19 before admitting him.

District health officials said the panic over COVID-19 and the lack of information about the disease have resulted in private hospitals and doctors turning away patients with symptoms similar to the coronavirus infection. The doctor in question had neither travelled abroad nor had come in contact with any patient who tested positive for COVID-19.

The Indian Express reported that the doctor had developed high-grade fever and suffered from breathlessness on Wednesday night. His family spent the entire night trying to get him hospitalised. “We first took him to his general physician, who was not there. From there we went to an intensive care hospital, but doctors there said he might have coronavirus and spread it in the hospital,” said the doctor’s uncle.