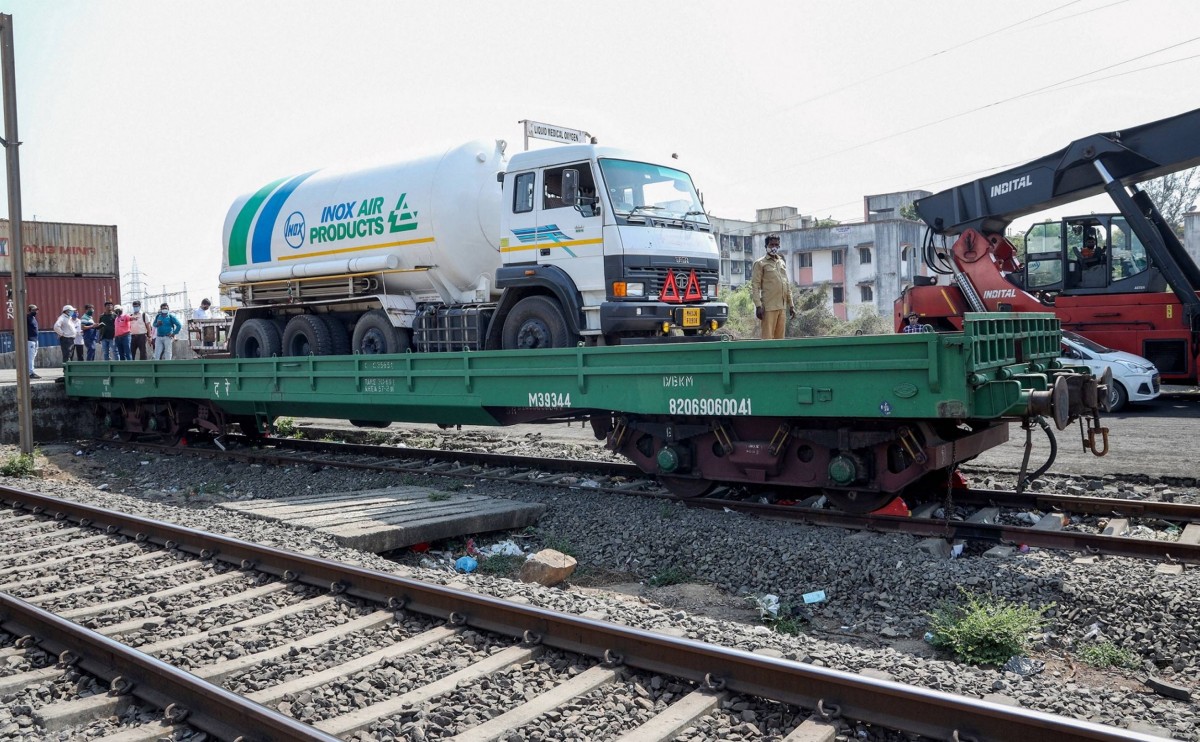 According to NDTV, Sir Ganga Ram Hospital received 14,000 cubic metres of oxygen in two separate consignments – Tuesday late night and Wednesday morning. The supplies are believed to last for a day or two.

“4,500 cubic metres were supplied by a private vendor. 6,000 cubic metres by Inox. The total requirement at present is 11,000 cubic metres. The supply should last 24 hours till 9 am tomorrow. Indian Oxygen and Inox have promised to refill the tanks during the day,” chairman Dr D.S. Rana told NDTV.

Government-run Guru Tegh Bahadur Hospital, which was on the brink of exhausting oxygen supplies, too, received a refill last night.

At Max Hospital in east Delhi’s Patparganj, the situation last night was reportedly nightmarish as one consignment from Inox, which was expected to reach at 2 am, arrived only at 8 this morning. The officials told NDTV that even this consignment is not enough to last beyond the afternoon as of the 300 patients in the hospital, 200 are on oxygen support.

The chief minister had voiced concerns over a shortage in supply of oxygen, urging the Centre to intervene immediately.

“Some hospitals are left with just a few hours of oxygen,” Kejriwal had tweeted.

According to the note, Lok Nayak Jai Prakash Narayan Hospital, Deen Dayal Upadhyay Hospital, Burari Hospital, Ambedkar Hospital, Sanjay Gandhi Hospital, BL Kapoor Hospital and Max Hospital in Patparganj were among those having only eight to 12 hours of oxygen left at 6 pm on Tuesday.

The Delhi high court slammed the Centre for not enforcing a ban on industrial use of oxygen immediately. “Are you going to tell patients to wait till April 22 for oxygen?” the court asked the Centre.

The central government had prohibited the supply of oxygen for industrial purposes from April 22, to meet growing demand for COVID-19 patients.

Meanwhile, the chief minister claimed that the quota of oxygen meant for Delhi was being diverted to other states by the Centre.

Del facing acute shortage of oxygen. In view of sharply increasing cases, Del needs much more than normal supply. Rather than increasing supply, our normal supply has been sharply reduced and Delhi’s quota has been diverted to other states.

OXYGEN HAS BECOME AN EMERGENCY IN DEL

The chief minister also wrote to Union minister Piyush Goyal saying that 140 metric tonnes of oxygen meant for Delhi was diverted to other states and demanded that the supply be restored.

On April 19, the Delhi high court directed Inox not to divert supplies from Delhi to other places. Inox contributes to 50% of the medical oxygen market in India.

Apart from oxygen shortage, some hospitals in the city are also unable to accommodate COVID patients due to lack of beds, news reports said.

A senior administrator at the All India Institute of Medical Sciences (AIIMS) told the Hindustan Times, “We already have about 900 COVID-19 patients admitted to the hospital; we do not have the capacity for more. We ask patients who come to the emergency to look for beds elsewhere; we cannot refer them because we do not know where to refer them to.”

The Wire Science@TheWireScience
3 Following 15.5K Followers
India’s Biological E. Ltd will soon start phase 3 clinical trials of its COVID-19 vaccine and plans producing 75 mi… https://t.co/9sNotv7bNI
10 hours ago
1
After Covaxin and Covishield, the Sputnik V vaccine was the third approved for use in India. The first consignment… https://t.co/02kIdh9byy
11 hours ago
2
"I don’t think viruses go by weekend or week or day or night. We have to take more strict measures, I don’t know wh… https://t.co/Ug9Eh5wekF
13 hours ago
1
Between the hospital bed shortage and the horrifying oxygen shortage, vaccines have offered a ray of hope – even as… https://t.co/ovP30B8hdm
13 hours ago
1 1
Tree-killing microorganisms like the microfungus responsible for Dutch elm disease have been criss-crossing the wor… https://t.co/zZQLyXofi2
14 hours ago
1
Fourteen years after reports noting that India has two separate species of the gibbon – the hoolock gibbon and the… https://t.co/WhSSBYNUHg
15 hours ago
2 4
Ethnicity, sex and obesity were also found to be risk factors for severe COVID outcomes. But, of course, we can’t d… https://t.co/RFy9jQBeuv
17 hours ago
1
India reported another record daily rise in coronavirus cases on Friday, bringing total new cases for the week to 1… https://t.co/h74nRS7SVr
18 hours ago
SpaceX achieved the first successful touchdown of its prototype Starship rocket during the latest test flight of th… https://t.co/nMttAEYhiX
19 hours ago
Before the pandemic, the global demand for all vaccines was around 5.5 billion doses a year. We now need at least… https://t.co/fghzpizbVU
20 hours ago
1 8
By offering tech tools like application programming interface that can only be used by software programmers, the go… https://t.co/6llhHHbnkm
20 hours ago
4 6
COVID-19 has our undivided attention at the moment, and once it passes, we must all join the long march for better… https://t.co/D3gbfLg853
22 hours ago
3
Inconsistent concepts of nature have greater consequences today than they did two generations ago. https://t.co/ltav5DzT8A
23 hours ago
There is currently zero visibility of the Centre’s plans for vaccine procurement, even if it palmed off this respon… https://t.co/i1HEgm58Tv
1 day ago
20 56
How our ancestors treated and mourned the dead can offer crucial clues, helping to reveal when we first developed t… https://t.co/nIjjB5fdlf
1 day ago
3
Contact us