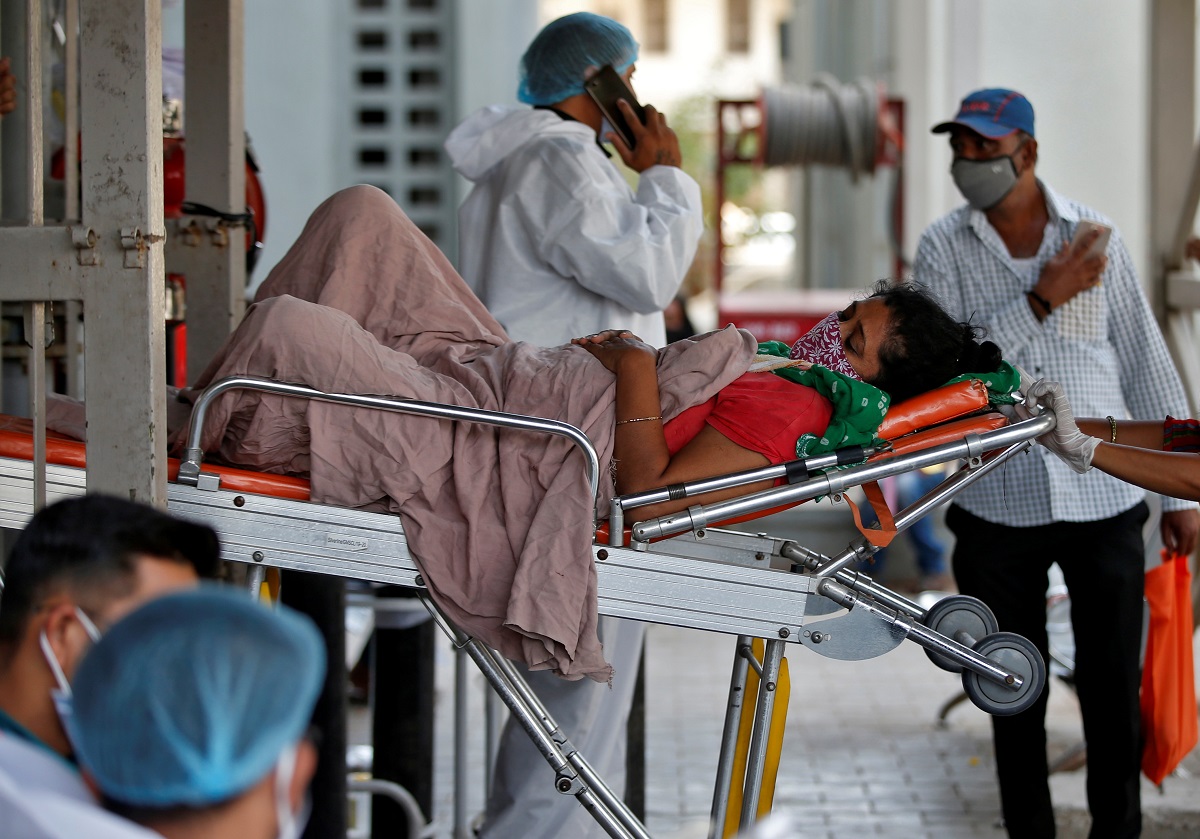 COVID-19: Delhi Hospitals Get More Oxygen but Stocks May Last Only ‘Two Days’

A patient is wheeled inside a hospital for treatment, amidst the spread of COVID-19 in Ahmedabad, India, April 19, 2021. Photo: REUTERS/Amit Dave

New Delhi: Gujarat is still in the dark about the presence of mutant strains of SARS-CoV-2 in the state, as samples sent to the National Institute of Virology (NIV) in Pune for genome sequencing have not yet been returned, according to an Ahmedabad Mirror report.

The newspaper report said that the results of Whole Genome Sequencing (WGS) of samples collected from COVID-19 patients, some of which were sent as early as March, have not yet been received by the state health department. At the start of April, the state sent 646 samples sent to the NIV but had received the reports of only 181 samples.

Surat’s deputy municipal commissioner of health, Ashish K. Naik, confirmed to the Mirror that the city has not received any more results from the NIV in April. He added among the results that the city received, the variants first identified in the UK (B.1.1.7) had been found in some samples and the variant first identified in South Africa (B.1.135) had been found in one sample.

However, the city does not yet know if the B.1.617 strain, the double mutant the was identified in India, is prevalent.

Dr Naik told the Mirror, “Since three major regions of our city – Dindoli, Limbayat and Udhna zones – have heavy contact with Maharashtra, and we also have many patients from the neighbouring state, we are going by the logic that we may be battling the double mutant B.1.617 variant of concern (VOC) prevalent in 61% samples in the neighbouring state. But we have no confirmation whatsoever.”

In Vadodara too, the situation appears to be the same. “We have not yet received the results of any samples recently and all we have to go by is that previously, the [B.1.1.7 strain identified in the UK] had been seen in international passengers,” said Devesh Patel, MoH of the Vadodara Municipal Corporation.

Gandhinagar’s chief district health officer told the newspaper that the city had sent the sample of an international passenger from South Africa, who had tested positive for COVID-19, to the NIV on March 14-15. He said, “As on April 17, we have still not received the result of the sample.”

The state’s principal secretary of health Jayanti Ravi told the Ahmedabad Mirror that the state government is “in regular touch” with the NIV. The laboratory has informed the government that apart from the variant first identified in the UK, no others have been identified among the samples sent by the state.

“We have as yet had no official confirmation of the double mutant variant of Covid being found in Gujarat,” she said.

Several experts and media reports have flagged India’s failure to sequence enough samples of COVID-19 to identify the presence of variants. A Down To Earth report had in late March said that as of the first week of March, India had sequenced less than 1% of total positive samples. India’s guidelines state that 5% of all positive COVID-19 samples in every state and 100% of all positive samples from international travellers should be collected on a weekly basis for sequencing.

The Centre had said on April 16 that the Indian SARS-CoV-2 Genomics Consortium (INSACOG), a network of ten laboratories established in December 2020 for continuously monitoring the genomic changes of SARS-CoV-2 in India, had conducted Whole Genome Sequencing on 13,614 samples.

“Of these, 1,189 samples have tested positive for variants of concern for SARS COV–2 in India. This includes 1109 samples with UK variants; 79 samples with South African variant and 1 sample with the Brazil variant,” the release said.

The release says that while the National Centre for Disease Control had sent results directly to Himachal Pradesh, Punjab, Rajasthan and Maharashtra, Gujarat was not mentioned. The Ahmedabad Mirror report says that despite Gujarat reporting an exponential increase in new cases recently, it was concerning that it did not receive information about the possible presence of variants.

The situation has been compounded by the fact that attempts by the Gujarat health department to obtain ‘unofficial results’ has also run into hurdles. The department had in mid-March ordered all major COVID-19 testing centres to send 2% of samples to the Gujarat Biotechnology Research Centre (GBRC) in Gandhinagar, apart from sending 5% random samples to the NIV. This, the department hoped, would allow the state administration to at least know what they are up against “unofficially”.

However, the results of the 400 samples that the centre have not been published yet as “many officials were in quarantine these few weeks”, the Mirror‘s report says.

‘Shooting in the dark’

Dr Atul Patel, an infectious diseases expert who is part of Gujarat’s COVID-19 Task Force, told the Mirror that the COVID-19 situation in Gujarat is “like shooting in the dark when you don’t know your enemy”.

“If you don’t know the genome (variant) most prevalent in a population and its characteristics, you cannot fight it effectively… The matter of concern is that we are not characterising the double mutant in India,” he said.

In the UK, the variant was identified only after a large number of samples were sequenced, Atul Patel said, contrasting it with the situation in India. “They not only found high transmissibility in vitro, but also came out with a publication from a clinical scenario, with 5,500 patients in the match cohort. They found that it has an increased risk of mortality as well. We are seeing the same thing in Gujarat with the number of deaths reported every day,” he said.

He identified several problems with the action plan, saying that there has not been enough focus on the issue of reinfection. Even people who may have been infected earlier could be reinfected by the double mutant variant as the neutralising antibodies may not recognise it, he said.

Patel continued, “However, just identifying the mutant is not enough. We have to study the clinical progression and outcome in patients infected by it. We need to know what is the effect of newer mutants on different organs. But since we do not know who is infected by the new mutants, we cannot clinically observe them and find out what is happening to them. For this, we need same day results of genome sequencing to know which mutant we are dealing with and their clinical courses and outcomes.”